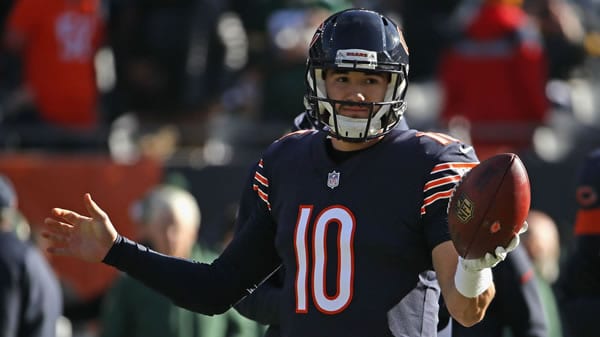 Houston and Chicago once harbored high hopes for this season, but they’re both now probably playing out the string, heading into this inter-conference match-up slated for Sunday afternoon at Soldier Field. The Texans lost ground early and don’t have enough games to make it up. The Bears, on the other hand, steamed out of the gate this season, but they’re leaking oil now. This game is going to go off at right around a pick’em on the NFL betting board; who do we like for our free NFL pick?

Week 14 NFL betting odds opened Houston as a one-point favorite for this game, with an over/under of right around 46. Early betting action then edged this game to a pick’em and dipped that total to 44.5.

Houston was on a 3-1 run both SU and ATS until losing last week at home to Indianapolis 26-20. The Texans trailed the Colts 7-0 early, then led 10-7, then trailed 21-10 but pulled to within 24-20 at the half. Unfortunately, Houston came up empty from there, blowing a chance to win the game when it fumbled the ball away at the Indianapolis 2-yard line with 1:22 to go, missing out on both the victory and the cover as a 3.5-point underdog.

The Texans actually out-gained the Colts 398-371, the first time in seven games they out-gained their opponent. But Houston also lost time of possession by a 34:26 split, turned the ball over twice in Indianapolis territory, and allowed five sacks, including one for a safety, and numerous hurries, putting quarterback Deshaun Watson on the run much of the day.

The Texans have also been out-rushed each of their last seven games.

Two games ago, Houston beat Detroit 41-25; three games ago, the Texans beat New England 27-20; four games ago, they lost at Cleveland 10-7 but covered as four-point dogs; and five games ago, they beat Jacksonville 27-25. So Houston is getting better results lately, after struggling against a tough schedule earlier this season.

At 4-8 overall, though, the Texans are down to playing the rest of this season for pride.

Meanwhile, Chicago totes a six-game losing streak into Sunday, after falling at home to Detroit last week 34-30. The Bears scored the first nine points of the game and led 23-13 at the half. They still led 30-20 with less than three minutes to go but gave up a quick 10 points in less than a minute and couldn’t respond, snatching defeat from the jaws of victory.

In the end, Chicago drove to the Lions’ 20-yard line but got stuffed on a 4th-and-1.

The Bears got out-gained by Detroit 460-389, although they also out-rushed the Lions 140-60 and won the time of possession by a 32:28 split. Chicago just committed one crucial, brutal turnover, and it cost them the game.

The Bears have now been out-gained by eight of their last nine opponents and out-rushed by nine of their previous ten foes.

Two games ago, Chicago lost to Green Bay 41-25, and that game wasn’t even as close as that final score might indicate. But prior to that, the Bears had lost three straight by one score each to Minnesota, Tennessee, and New Orleans. In fact, of Chicago’s recent six losses, five came against teams that would be in the playoffs if the postseason started today.

At 5-7 overall, the Bears only trail the Vikings by one game in the battle for the third and final NFC wild-card spot, but it seems like more than that.
These two teams have played five common opponents so far this season. Houston is 1-4 both SU and ATS against Minnesota, Tennessee, Green Bay, Detroit, and Indianapolis, while Chicago is 1-5 both SU and ATS vs. those five foes. Both teams’ only wins came against the Lions.

These two teams last met four seasons ago, a 23-14 Texans victory. But that was already a couple of coaches and quarterbacks ago for both.

On the personnel front Houston WR Will Fuller, who leads the team with 879 receiving yards and eight touchdowns this season, is out serving a suspension.

Houston is 4-4 both SU and ATS under interim Coach Crennel.

Totals are split 6-6 in Texans games this season, which are averaging 51 total points.

Unders are 7-5 in Bears games this season, which are averaging 44 points.

Houston is playing the better ball as of late. Led by QB Watson, who’s been just super over the last six weeks or so. Bears fans will drool watching him, thinking of what their team could be with a guy like that. The Texans’ defense can be moved, but Chicago just doesn’t have the tools to do it. We like Houston here. Question: Why are you still betting on games at -110 odds when you could be only having to lay -105? Start betting more wisely today at BetAnySports! Way better deal!