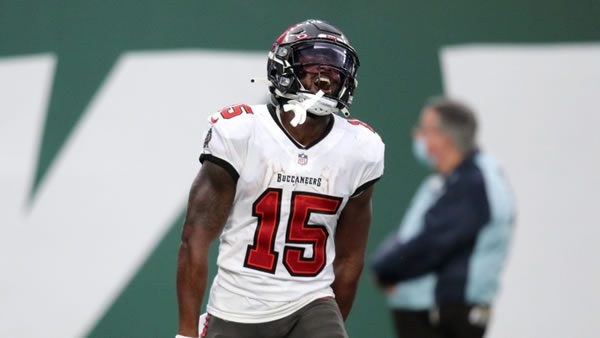 The Tampa Bay Buccaneers have been in the spotlight this week for all the wrong reasons stemming from WR Antonio Brown’s mid-game meltdown and unusual departure from the team in last week’s come from behind 28-24 victory over the Jets. Despite the mere controversy, the reigning Super Bowl Champions are still involved in a heated battle for the #2 seed in the NFC, which would guarantee the Bucs home-field advantage in each of their first two playoff games granted they survive the 1st-round. On Sunday, the Buccaneers will get a chance to keep their hopes for a #2 seed alive when they host the Carolina Panthers at Raymond James Stadium.

Though the Buccaneers will be 8 point favorites this week against a Panthers team that has completely derailed with on the heels of 6 straight losses, the Buccaneers will still need a loss from the Rams in order to clinch the #2 seed. More importantly, Sunday’s contest between the Panthers and Bucs has been moved to the afternoon time slot at 4:25 PM (EST), which is the same time the Rams will face the 49ers at SoFi Stadium. Needless to say, there will not be any opportunity for either team to sit back and watch to decide how they will approach their week 18 showdowns. As a result, bettors should expect a full effort from the reigning champs in Sunday’s finale.

Before last week’s meltdown that sent WR Antonio Brown packing, the Buccaneers had already suffered a significant loss with fellow WR Chris Godwin, who was lost for the season with an ACL injury. With both Brown and Godwin on the shelf combined with RB Leonard Fournette expected to miss another week with a hamstring injury, it is safe to say the Buccaneers are significantly depleted on the offensive side of the football. Obviously, QB Tom Brady remains the best asset in football, and WR Mike Evans will still see a massive share of the passing targets. Still, this Bucs team is far removed from the every-down dangerous threat they posed earlier in the season.

For this week’s match-up, I imagine Tampa Bay will look for solace in the play of their defense, which has one of their more promising match-ups of the season. The Panthers offense has been absolutely horrendous during the 2nd half of the season, averaging just 13.6 points per game over their last six games. The quarterback carousel between Cam Newton and Sam Darnold appears to have finally landed on Darnold’s shoulders for the remainder of the year. However, Darnold is completing barely more than half of his passing attempts with seven scores and 12 picks on the season. With the loss of RB Christian McCaffrey, the Panthers have failed to find any answers on the ground, and that is not helpful for a quarterback that is struggling with accuracy issues.

Tampa Bay’s top-rated run-defense will not be threatened from the Carolina backfield, and expect Defensive Coordinator Todd Bowles to dial-up relentless pressure. In the 32-6 blowout victory in week 16, the Bucs defense forced seven sacks and one interception as the Panthers’ experimented with a dual quarterback approach from Newton and Darnold. While Darnold is expected to get the majority of the snaps this week, I’m expecting a similar outcome from the Tampa Bay defense.

Jay’s Pick: Easy pick here. Tampa Bay -8. Question: Have you seen the live betting platform at Bovada Sportsbook? It’s freakin’ incredible! User friendly and all on the same page. LOTS of betting options too, unlike most other books! Click here to check it out! They’ll give you a 50% bonus on your first deposit!