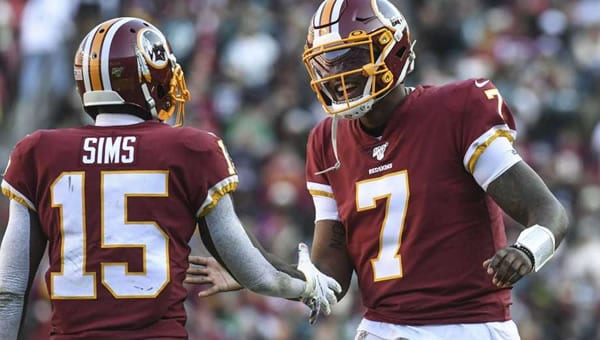 Two teams coming off nice upsets to open this season meet when the Cardinals host the Washington football team Sunday afternoon in Phoenix. Second-year quarterback Kyler Murray led a comeback for Arizona last week while second-year QB Dwayne Haskins did the same for Washington. Who do we like here for our free NFL Week 2 pick?

Week 2’s NFL betting odds opened Arizona at -7 over Washington, with an over/under of right around 46. Early betting action then bumped that total to 47.

Any bettors thinking Washington might win this game outright could get upwards of +235 on the NFL moneyline.

Washington opened its 2020 season and the Coach Rivera era with a 27-17 come-from-behind victory over Philadelphia last week. Washington lost one yard on its opening possession of the season, then allowed the Eagles to drive their first possession 62 yards to a touchdown. Following another Washington punt, it allowed Philadelphia to drive 76 yards to a field goal. And a little later, Washington gave up another 62-yard drive to an Eagles touchdown and a 17-0 deficit.

However, Washington got the break it needed when it picked off Philly QB Carson Wentz shortly before halftime and converted it into a Dwayne Haskins touchdown pass.

Washington then converted another takeaway into another touchdown early in the third quarter to pull within 17-14 and tied the game with a field goal early in the fourth. Washington then took the lead on Peyton Barbers’ second touchdown run of the day with six minutes left, tacked on a field goal, and held on from there for the outright victory as six-point home dogs.

On the day Washington got out-gained by the Eagles 265-239 but limited Philadelphia to just 57 yards rushing, recorded eight sacks, and won the turnover battle 3-0, resulting in a +14 points differential.

Arizona, meanwhile, also rallied last week to upset defending NFC champion San Francisco on the road 24-20. The Cardinals allowed the 49ers to drive the opening possession of the game 41 yards to a field goal, then punted on their first possession, then allowed a 76-yard catch-and-run San Francisco touchdown to fall down 10-0. But Arizona got the break it needed shortly after that when it blocked a 49ers punt, which the Cardinals converted into a touchdown of their own.

Arizona trailed 13-10 at the half, then took a 17-13 lead on Kyler Murray’s 22-yard scoring scramble early in the fourth. The Cardinals immediately gave up a 78-yard 49ers scoring drive to fall behind again, but immediately responded with a 75-yard scoring drive to re-take the lead. In the end, Arizona allowed San Francisco to reach the Cardinals’ 16-yard line late but came up with a defensive stop to secure the outright victory as a seven-points dog.

Arizona also got an outstanding contribution from newcomer DeAndre Hopkins, who caught 14 balls for 151 yards and one near-touchdown.

These former division rivals last met back in 2018, a 24-6 Washington win in Arizona. But that’s already a long time ago for these two teams.

Arizona pulled the better upset last week, beating a Super Bowl team on the road. The Cardinals also own the edge at QB with Murray, who already appears to possess a great on-field relationship with Hopkins. Meanwhile, Washington probably isn’t going to get the gifts this week it got from Philadelphia last week. And finally, Arizona’s in its second season under its new head coach, while Washington is still going through the learning process under Rivera. We like the Cardinals here for the win and the cover. Bet your Week 2 NFL picks for FREE by grabbing a 100% real cash bonus on your first deposit of $100 to $300 at MyBookie Sportsbook!