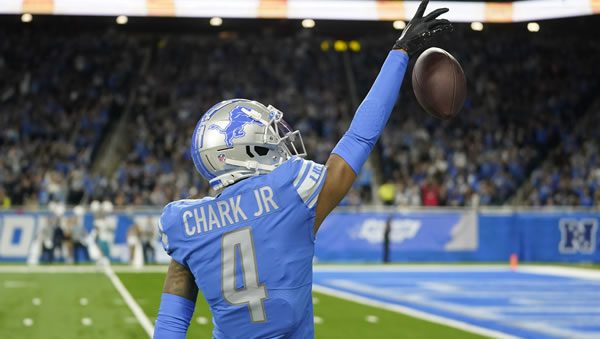 The 2022 NFL season has been strange. Both New York teams might make the playoffs, the defending champion is basically in last place, and the Detroit Lions are playing a meaningful game in Week 17. Not only are there stakes for this Sunday’s game between Chicago and Detroit, but the Lions are favored by six. Maybe there is some recent occasion when Detroit was a near-touchdown favorite in January, but I would also believe it if this is the first time that has happened since Barry Sanders was playing. Sorry, not sorry about not researching that item. I have used up my yearly quota on niche info nuggets to put in the opening paragraphs. Chicago is looking ahead to next season, but they have proved to be a pesky opponent even while losing, they dropped a one-point decision to Detroit in Week 10. Detroit survived a 1-6 start and enters the week in the playoff picture, but they need some help. Winning out against the Bears and Packers is their best shot, and their chances are nearly zero if they don’t avoid the upset this weekend.

Chicago is just 1-5 against the spread in their last six games overall and 1-8 ATS in the last nine against a division foe. They haven’t performed well on the road, with a 2-6 ATS mark in the last eight away from home, and have just one ATS win in their last seven games in January. Detroit has won eight straight against the spread inside the division, and they are riding a 4-0 ATS win streak at Ford Field. The Over is 8-1 in the last nine games for Chicago and 5-0 when on the road. The Over is 7-2 in the last nine Detroit home games and has hit in five of the last six against the NFC North. The underdog has a 5-1 ATS record in the last six meetings between these teams. About 63% of bets are on the Lions through Wednesday, with 58% of the public money on the Over.

Fading to the Finish

Chicago has been a tough out for even some of the best teams this season, but the fact is that they have lost eight in a row and aren’t likely to turn that around, considering a fresh batch of injuries. The big passing play has eluded this team all season due in part to Darnell Mooney hitting the IR in November, and now Dante Pettis, Chase Claypool, and Equanimeous St. Brown are all listed as questionable for Sunday. That leaves TE Cole Kmet (44-460-5) as the leading healthy receiver. This offense does lead the league in rushing at 179 yards per game, and much of that has been due to Justin Fields and his 1,011 yards. Fields rushed for 137 yards and two scores against the Lions in Week 10, and he should dominate again with Detroit sitting at 28th in run stopping. David Montgomery has not been dynamic, but he has 1,060 scrimmage yards and sits second on the team with six total touchdowns. The defense is giving up 26.2 points per game which is second-worst in the league, and MLB Jack Sanborn just hit the IR with an ankle injury. The Bears are last in third-down defense and sacks, with safety Jaquan Brisker leading the way with four. Eddie Jackson notched four interceptions in twelve games, but he hit the IR in November. Fields gives this team a lot of hope for the future, but they need some significant help in the draft and free agency this offseason.

There is no denying that Detroit is an up-and-coming threat in the NFC, but they have a lot of work to do on the defensive side of the ball before they reach the next level. The offense is 4th in total yards and 5th in scoring at 26.1 points per game, but the defense is bottom-5 in most major categories, including giving up a league-worst 26.7 points per game. Detroit gets a break, given Chicago is bringing the worst passing offense to town, but containing Justin Fields will be an issue. Jared Goff sits just shy of 4,000 passing yards and has a chance to set a career-high in that category. His 26 passing touchdowns are the fifth most in the league, and a remarkable 20 of them have come at home. Jamaal Williams hasn’t scored for three weeks, but his fourteen rushing touchdowns still lead the league, and his 850 rushing yards lead the team. DeAndre Swift is averaging 1.5 yards per carry more than Williams, but Swift is more often utilized in the passing game, and his 37 receptions are the third most on the team. Amon-Ra St. Brown (96-1050-6) leads the Lions in all receiving categories, and two more good weeks will likely put him in the top ten for the franchise single-season totals. Similar to their opponent this week, Detroit struggles on third down defense, they trail only Chicago in first downs allowed, and their 30 sacks are the sixth-fewest in the league. Aidan Hutchinson leads the team with seven sacks, and he did get Justin Fields back in Week 10. Hutchinson also set a career-high with eight tackles in that game.

Detroit Wins, but a Field Day means a Chicago Cover

Fans of the betting the Over are probably targeting this game more than any this weekend. These teams combined for 61 points in their first meeting, and a dome is as good as it gets for scoring potential in January. Both offenses found a groove in the second half after the first half ended with a 10-3 score, and the big play was there for Chicago, especially as Cole Kmet snagged a 50-yard score and Fields had a 67-yard touchdown run. I think the health concerns for Chicago are real, and they might not have much beyond Fields and Montgomery, but those two are going to be enough to get points on the board. I like Detroit to use Williams and Swift as they did in the earlier meeting, and St. Brown proved almost unguardable in that game. Goff is playing so well at home, and I think that continues with Detroit getting a 29-24 win. That is a close shave for a cover, with Chicago suffering another one-score loss, but they are the ATS winners on Sunday.

Pick to Cover the Spread: Chicago