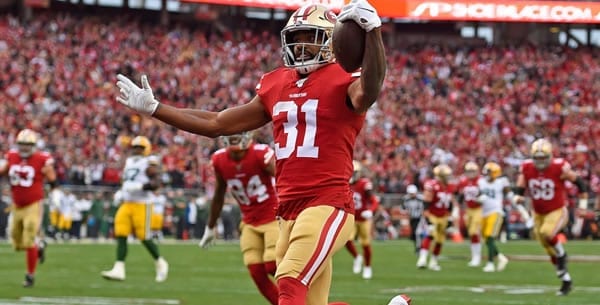 It’s Super Bowl time, and two of the three best teams in the league will face off in this one, as the 49ers romped through the NFC, and the Chiefs overcame a few slow starts to win the day in the AFC. For San Francisco, it’s their second chance to tie the Patriots and Steelers with six Super Bowls to their name, while the Chiefs are after their second and making their first Super Bowl appearance in 50 years.

A large part of that was because Kansas City refused to draft a quarterback (ironically, for years, the Chiefs’ strategy seemed to be to take San Francisco’s old quarterback, as no fewer than four quarterbacks went directly from San Francisco to Kansas City from 1992 through 2013), but the Chiefs finally hit paydirt with Patrick Mahomes and have built an explosive offense that nobody in the AFC was able to stop.

On the other side of the coin, San Francisco’s offense has been more about the ground game in the playoffs. The 49ers didn’t ask Jimmy Garroppolo to do much against Green Bay in the NFC title game, but he didn’t need to do much with how well the 39ers were running the football. With a quality offense that doesn’t care how it beats you and a first-rate defense, the 49ers became the class of the NFC and the latest from the NFC West to reach a Super Bowl. It’s appropriate that the 49ers are the NFC representative in the decade’s last Super Bowl because the NFC West has dominated this decade, as five out of 10 Super Bowls featured an NFC West team. Only Arizona (last appeared in 2009) failed to make it to the Super Bowl from the West in this decade. However, the West’s dominance has traditionally fallen apart at this hurdle, as six of the past seven NFC West teams to reach the Super Bowl watched the opponent leave with the Lombardi Trophy.

How the Public is Betting the Super Bowl

The line has held tight at Kansas City by a point, but the total has increased from 53.5 to 54 since the books opened.

This is an explosive offense, but it feels a lot like a college offense. Damien Williams only carried the ball 111 times this year, and while he was effective in yards per carry, he didn’t break 500 yards on the ground, and he was the leader for Kansas City. On the other side of the coin, Patrick Mahomes threw efficiently and lit up scoreboards by going for 4,031 passing yards this year, and nobody did more damage in the passing game than Travis Kelce, who hauled in 97 passes and gained 1,229 yards through the air. The Chiefs’ touchdowns were a bit hard to predict, as Mahomes likes to spread the ball around and hit five different receivers for at least three scores.

But this is not a great matchup for Kansas City, as San Francisco has stymied opponents through the air all season. Only New Orleans was able to move the ball consistently on the 49ers, who have frustrated teams time and time again with a fierce defense that pressures opponents and forces mistakes.

Don’t mistake Jimmy Garroppolo’s low totals in the NFC title game for a bad performance. Garroppolo could easily have done more, but the 49ers really didn’t need him to do more with their running game working as well as it was. Given that San Francisco ran all over the Packers, they’ll likely look to do the same thing to the Chiefs, who have an even weaker run defense than that of Green Bay. Look for either Raheem Mostert or Tevin Coleman to get the lion’s share of the carries as San Francisco tries to do the one thing that a team can do to stop Mahomes: keep him off the field. Given that the Chiefs don’t use a lot of clock, the 49ers can count on an exhausted Kansas City defense that already isn’t strong against the run in this matchup, which sets up the 49ers to control the clock and dictate the tempo of this game. There’s a lot to suggest that San Francisco will only throw when necessary and let the run game do the work for it, as the 49ers are equally comfortable doing either to try to win a game. If the Chiefs do slow down the ground game, Garroppolo can and will try to lead his team through the air, which he’s done multiple times this season.

This one will probably shock you, but it might be a good idea to play the under for the first quarter, a number that’s set at 10.5. But aren’t we dealing with two outstanding offenses that know how to move the ball? We are, but there’s also the fact that neither of these teams has been in the Super Bowl recently. Kansas City hasn’t been in this game in 50 years, and while San Francisco last played in the Super Bowl seven years ago, the 49ers are a completely different team than they were back then. The nerves that come with playing in the big game are real, and it takes time for teams to settle in. Three of the past five Super Bowls have not only gone under the total, but they were scoreless at the end of 15 minutes. I don’t anticipate the teams doing that, but I think 7-3 is a reasonable number at the end of 15 minutes, especially given that the second quarter is usually when they step it up.

By the same token, Kansas City is the best offense in the second quarter, and San Francisco is fifth in that department. The over is a little high at 16.5, but it might not be a bad idea to gamble on these teams finding their feet in the second, especially if you believe that the over is going to hit for the game.

As far as the full game total, I cannot stress this one enough: Do Not Bet an Underdog in the Super Bowl Unless You Think It Can Win The Game Outright. In fact, don’t bother to bet the underdog spread at all in the Super Bowl, take them on the money line.

Why? Simple: Only eight times in 53 Super Bowls has the favorite won the game and failed to cover the spread. Two of those were pushes, so the losing team is 6-45-2 ATS in the big game. The last time a team lost the game but covered was Arizona in Super Bowl 43 when it lost by 4 to Pittsburgh with the game at Steelers -7, and that took a late drive from the Steelers to seal the win. In fact, five of the six times where an underdog covered but lost, the game featured a score in the final two minutes of the game, with Super Bowl 30 marking the lone exception.

But that doesn’t mean you should automatically take the Chiefs. In fact, it’s a reason to believe in the 49ers. Over the past 18 Super Bowls, the underdogs are 12-6 SU. You’ll also probably want to look at the over, as the NFC West and AFC West have both been known for putting up points in the big game (last year’s 3-point disaster from the Rams notwithstanding).

If you like the Chiefs’ offense, Patrick Mahomes slinging it is a good bet to make. Mahomes has exceeded his projected total in eight of his team’s games this season, and he came five yards from doing so against Tennessee last week. The Chiefs need to throw the ball well to win this game, and Mahomes is very efficient with his yardage, so expect good numbers here. However, don’t count on him to throw it a lot. Mahomes only went over 38 passing attempts in five of his starts this season, and if he’s throwing a lot, that means Kansas City has fallen behind. If you like the Chiefs to cover, count on the under for passing attempts.

Now, if you like the 49ers’ defense, you should definitely consider going in the opposite direction, as San Francisco’s strength has been against the pass all season. The 49ers don’t allow many yards, and they’ve got the kind of pass rush that can make life very difficult for Mahomes and friends. You’ll also want to look at Raheem Mostert and his rushing attempts. Mostert is going to be vital for San Francisco to control this game because he’s going to be critical in the 49ers’ attempts to control the clock and keep Mahomes and company off the field. If he gets going, San Francisco can follow the same strategy that Bill Belichick used in Super Bowl 25, when the Giants held the ball for almost 2/3 of the game and kept Jim Kelly’s Bills off the field.

Odds are, you don’t remember that game, but the MVP of it was Ottis Anderson, the Giants’ running back. If San Francisco follows the same strategy — and given how poor the Kansas City rush defense was, there is good reason to believe it will, Mostert would be in line for the MVP. He’s going off at +700 for the MVP, which is excellent value for someone who figures to play a major role in whether or not his team actually wins the game.

Taking the fourth quarter as the highest-scoring quarter at +220 might also be a solid bet, as the fourth tends to be where the Super Bowl turns in one direction or the other as teams get desperate. The second quarter is where these teams have been their best, but with just above even money, it’s not worth the risk.

If you’re looking for a touchdown play, I’d look at Travis Kelce. He’s been a favorite target all year for Mahomes, and he’s paying at even money to score a touchdown at any point. If you want to be a little riskier, you could bet Kelce to score the first Chiefs touchdown of the game and not have to worry about a 49ers score. That’ll pay out at +410.

The temperature is set for 73 degrees at kickoff. Showers are forecast in the Miami area for Saturday night (which, honestly, is a little like saying the sun is going to come up the next day in South Florida). That could make the field slick, which would make it a lot harder to throw the ball.

I really don’t know why the Chiefs are favored here. Yes, Kansas City was a step away last season and has an explosive offense. But the Chiefs do not match up well with the 49ers. The thing they do best happens to feed into the 49ers’ defensive strength. The thing they do worst happens to match up perfectly with the way the 49ers bulldozed their way through Minnesota and Green Bay in the playoffs. Really, the only reason I can see for the public taking the Chiefs is because offense gets all the accolades, and Mahomes and friends can sling the ball.

But San Francisco’s got the defense needed to slow down Mahomes and the offense to keep him off the field entirely. The 49ers are the more balanced squad, and I like their chances to claim their sixth Super Bowl and move into that exclusive tier. Give me San Francisco to hoist the Lombardi Trophy.