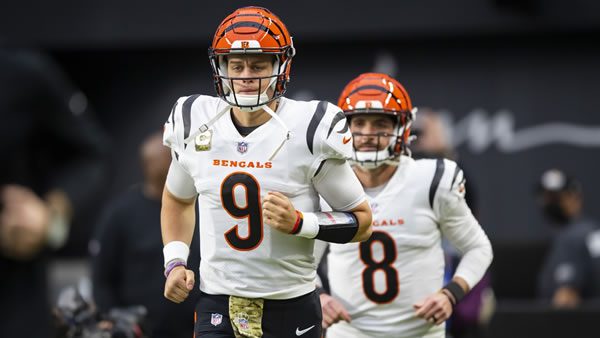 Bet your Week 18 NFL picks for FREE by scoring a 100% bonus at one of our many Top Sportsbooks!

The Bengals are headed to the playoffs while the Browns are headed for the golf course, heading into this AFC North rivalry game slated for Sunday afternoon in Cleveland. Cincinnati has already clinched a postseason berth and may yet have a shot at the No. 1 seed in the AFC. On the other hand, the Brownies are playing the last game of a lost season and will be without their starting quarterback.

The Bengals are favored by a field goal on the road; how are we playing this game with our free NFL betting pick?

The Week 18 NFL betting odds, for some reason, opened Cleveland as a 1.5-point home favorite for this game, with an over/under of right around 46. Early betting action then flipped Cincinnati into a three-point favorite and dropped that total five points to 41.

Cincinnati is 3-0 both SU and ATS its last three times out after coming from behind to beat Kansas City, which had won eight games in a row, 34-31 last week. The Bengals spotted the Chiefs the first 14 points of the game and trailed 28-17 at the half. But Cincinnati then scored the first 14 points of the second half to take the lead, let KC tie the game at 31-31, then won it with a short field goal at the buzzer.

With the victory, the Bengals clinched their first AFC North title since 2015.

Cincinnati out-gained Kansas City 475-414, although it also got out-rushed by the Chiefs 155-60. But the Bengals’ defense held KC to just 102 total yards and three points in the second half.

The Bengals have also played over their season wins over/under, which was 6.5.

At 10-6 overall, Cincinnati trails Tennessee and Kansas City by one game in the battle for the No. 1 seed in the upcoming AFC playoffs. The Bengals could still earn that top spot with a win and losses by the Titans and Chiefs because they would own the tie-breakers on both. However, if KC beats Denver Saturday, which is very likely to happen, Cincinnati would basically have nothing to play for Sunday.

Cleveland, meanwhile, lugs a three-game losing skid into Sunday after falling at Pittsburgh Monday night 26-14. The Browns, already eliminated from playoff contention, trailed 10-0 at the half and 13-0 in the third quarter, got within 19-14 with a minute to go but gave up an “oh-by-the-way” score to create the final losing margin.

So the Browns have now been out-gained and out-rushed by four of their last five opponents.

At 7-9 overall Cleveland will miss the playoffs this season after making it to the divisional round last season. The Browns will also play under their season wins O/U, which was 10.5.

On the personnel front, Cleveland QB Mayfield is headed toward shoulder surgery and will not play Sunday. The Browns may also play without a couple of their main running backs, who are also dealing with injuries.

Cleveland is 6-1 over the last seven meetings with Cincinnati and took the first meeting between these teams this season back in November 41-16. But we get the feeling Sunday’s game will play out a lot different than that one.

The totals are split 8-8 in Bengals games this season, which are averaging 50 total points.

The Under is 9-7 in Browns games this season, which are averaging 43 points.

The overs are 7-0-1 over the last eight meetings between these two teams, which have trended high-scoring.

Our pick on this game comes down to this; if Cincinnati has anything to play for, we’re betting the Bengals, big. But if they’re already locked out of that No. 1 seed, they’d be wise to sit many starters, and therefore we’d pass on this game. Want more picks? See what the Predictem Pros are betting this week!