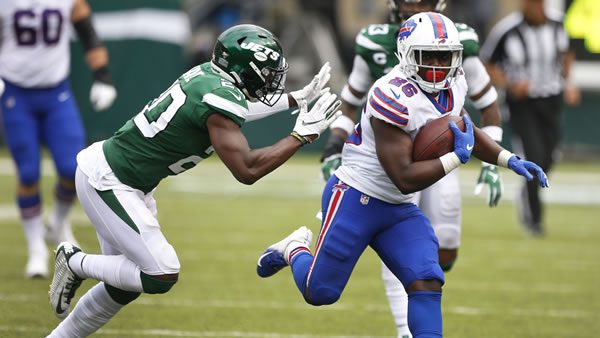 Point Spread: Buff -16.5 (Bovada - One of our favs! They offer a 50% real cash bonus, credit cards work there, you get rebates on ALL your bets even if they win and they pay FAST!)

The Bills shoot for another AFC East title while the Jets shoot for an upset when these
long-time rivals meet for the 122nd time Sunday afternoon in Buffalo. The Bills are already in
the playoffs, but they’d like to host at least one game, which they could do with a win Sunday.
On the other hand, New York would probably love to put a dent in those plans.

Buffalo is
favored by a huge number for this one; which way are we going here with our free NFL betting
pick?

The Week 18 NFL betting odds opened Buffalo as a 17-point favorite for
Sunday’s game, with an over/under of right around 45. Early betting action then dipped the Bills
to -16.5, and that total to 43.5.

New York just blew a shot at its first two-game winning “streak”
this season after blowing a late two-touchdown lead and losing at home to Tampa Bay last week
28-24. The Jets, playing as 14-point home dogs, led the Buccaneers 7-0 early, 17-10 at the half,
and 24-10 late into the third quarter. But New York then gave up the last 18 points of the game,
losing on a 33-yard Brady touchdown pass with 15 seconds left. The Jets did, however, cover that
spread easily, and that’s what’s important, right? New York had a chance to go up by seven late
but eschewed a short field goal, went for it on a fourth-down and got stuffed. Brady then led
Tampa down the field for the game-winning score. The Jets got out-gained by the Bucs 467-374 but
out-rushed Tampa 150-62. They just came up two yards short of clinching the victory. New York has
now been out-gained by eight of its last nine opponents, but it’s also out-rushed each of its
last two foes. Two weeks ago, the Jets beat Jacksonville 26-21. Three weeks ago, they lost at
Miami 31-24 but covered as 10-point dogs. So New York is 3-0 ATS its last three times out. At
4-12 overall, the Jets will miss the playoffs for the 11th straight season and will play under
their season wins over/under, which was six.

Buffalo, meanwhile, rides a three-game winning streak into Sunday
after beating Atlanta at home in the snow last week 29-15. The Bills spotted the Falcons an early
safety and trailed 15-14 at the half. But Buffalo won the second half 15-0 and garnered a push of
the spread as a 14-point favorite. Bills backers got really lucky late when Atlanta QB Ryan was
called down just short of the goal line, then got called for a taunting penalty. Buffalo then
kept the Falcons off the board to avoid the ATS loss. The Bills out-gained Atlanta 351-265,
out-rushed the Falcons 233-96, and won the time of possession by a 36:24 split. Buffalo has now
out-gained each of its last three opponents. Two weeks ago, the Bills won at New England 33-21,
and three weeks ago, they beat Carolina 31-14. At 10-6 overall, Buffalo has already clinched a
third straight playoff berth and is tied with the Patriots for the lead in the AFC East. The
Bills also own the tie-breaker on New England, thanks to the better divisional record. So with a
win, Sunday Buffalo clinches its second straight AFC East title and home-field advantage for an
upcoming AFC wild-card game.

Buffalo owns a three-game winning streak against the Jets,
going 2-1 ATS in the process. The Bills won the first meeting between these rivals this season
back in November 45-17, covering as 13-point favorites. Buffalo out-gained New York that day
489-366, out-rushed the Jets 139-70, and won the turnover battle 5-2.

Also, that game played over a total of 49.

Buffalo is going to win this game; the only thing that really matters is the margin of
victory. However, New York has actually been playing some decent ball over the last few weeks and
would probably love to give the Bills a good game Sunday. Also, playing at home means the line on
this game is probably inflated by a good four or five points. Also, 16.5 points is a ton in the
NFL. We’re going to take those points with the Jets. Want more picks? See what the Predictem Pros are picking this week!