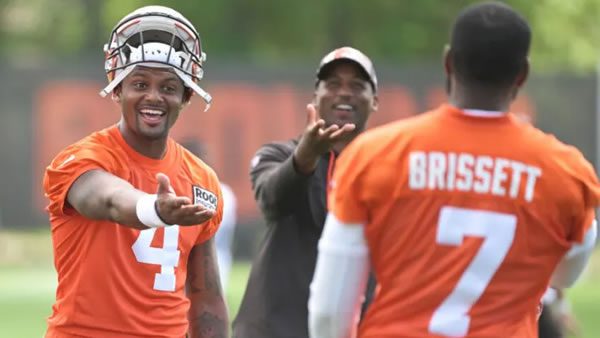 Could the Cleveland Browns have screwed up any more over the offseason? If you have been living under a rock, the Browns signed QB Deshaun Watson amidst a plethora of off-the-field issues. The Browns also let former QB Baker Mayfield walk, which ended in Mayfield signing with the Carolina Panthers. Now, Watson is suspended for 11 games, and the Browns have all but forfeited the 2022 campaign unless QB Jacoby Brissett and the running attack can salvage the majority of the season. Either way, the drama that is Cleveland Browns football will reach a fever pitch in the season opener when they travel to Charlotte to meet the Carolina Panthers and former quarterback Baker Mayfield.

While I understand the Browns’ offseason moves were focused on the long-term future, they could have still handled things much better to protect the imminent future. Regardless, former QB Baker Mayfield will get his shot at revenge after a bitter departure when he leads the Panthers in week 1. For Carolina, things worked out well. After making a move for QB Sam Darnold prior to 2021, which was a failed experiment, the Panthers get an immediate upgrade at the quarterback position to complement RB Christian McCaffrey and WR DJ Moore, which provides the offense with some balanced firepower for the first time in years.

While it would appear that the storyline favors the Panthers for this Week 1 showdown, I don’t think that assumption is as reliable as many may believe. The betting public has hammered the Panthers since opening as 4 point underdogs, and the line has consistently shifted in Carolina’s favor to its current position as two point favorites. However, the Browns still have one of the best rushing attacks in the NFL, and they will surely ride the ground game even more with Brissett behind center. So the question quickly becomes, do we really trust the Panthers defense that ranked in the bottom half of the league against the run in 2021 and gave up 24 points per game?

The Panthers went 0-7 ATS in the final seven games of 2021 but to be fair, RB Christian McCaffrey was hurt, and the quarterback play from Sam Darnold was pathetic. The Panthers’ offense is built around McCaffrey, and keeping him healthy is critical to their success this season. Defensively, Cleveland struggled to get pressure on opposing quarterbacks last year, even with DE Myles Garrett. Without any indications of improvement over the offseason, Mayfield will have opportunities to make plays down the field, and if he plays well, I believe the world will see just how good WR DJ More truly is.

The problem with that thought process is I don’t know why anyone would have high confidence in Mayfield. Mayfield had one of the best rushing attacks in the NFL and still consistently made mistakes when the offense needed him. So how much will this Panthers offense improve remains to be determined. For Cleveland’s offense, one of the few things they did correctly over the offseason was bring in WR Amari Cooper, and they did not allow backup RB Kareem Hunt to leave despite a trade request. As a result, the Browns have a lot of playmakers at the skill positions to help manage the storm until Watson returns. The question for this match-up with Carolina is will they find enough big plays to pull out the victory?

For transparency, I don’t like betting on highly inconsistent teams, which is what I believe is featured in this match-up. That said, it seems like the entire world is backing the Mayfield revenge narrative. However, Cleveland is the better football team, even with Brissett behind center. In fact, Brissett is not a bad backup option and is more than capable of putting together quality performances. I think the Browns have more paths to victory, so I am fading the public here.

Jay’s Pick: Take Cleveland +2. Bet all your Week One NFL predictions for FREE by taking advantage of a 100% real cash bonus up to $300 when you use bonus promo code PREDICT100 at MyBookie Sportsbook! Be sure to check out their season long handicapping contest and their survivor contest too! A season long of fun for cheap!