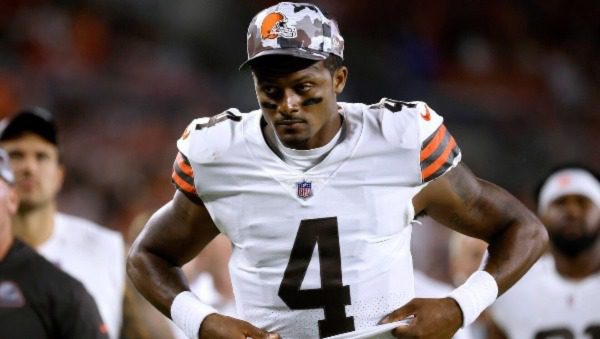 Point Spread: CLE -7/HOU +7 (STOP betting games at -110! YOU-ARE-WASTING-MONEY! Start laying only -105 TODAY at BAS Sportsbook! You’ll be so glad you made the switch!)

For the first time since 2020, QB Deshaun Watson will make his long-awaited return this Sunday when the Cleveland Browns travel to NRG Stadium for a date with the Houston Texans. As most are aware, Watson sat out the entire 2021 season amid off-the-field troubles that also resulted in an 11-game suspension for the start of the 2022 season. On Monday, Watson was officially reinstated by the NFL, and Head Coach Kevin Stefanski acknowledged that Watson would get the start this Sunday against his former team when the Browns meet the Houston Texans at NRG Stadium.

As a team, the Browns have dropped six of their last eight games despite pulling out a 23-17 overtime victory over the struggling Buccaneers last week. Needless to say, the team is in desperate need of better performance, and perhaps the Texans are the perfect team for Watson’s return. At 1-9-1 SU, the Texans have dropped six straight games, including an embarrassing 30-15 loss last week against Miami. In that game, the Texans actually trailed 30-0 at the half before the Dolphins benched their starters with a blowout secured. In many ways, last week’s blowout loss to Miami was a microcosm of Houston’s struggles in recent weeks, which featured a terrible effort on both sides of the football.

With Houston’s recent struggles, I can see why the betting public would be salivating at Cleveland in this spot. Before his absence, Watson was becoming one of the elite quarterbacks in the NFL. In fact, Watson completed 70% of his passes for 4,823 yards with 33 touchdowns and just seven picks in his last full season in Houston. Needless to say, Watson’s return definitely brings some optimism to an offense that has already produced solid results this season, ranking 5th in total offense by averaging 376 total yards per game.

Personally, I am more critical of Watson’s long layoff. I don’t expect the former star to come out of the gates gun-blazing this week. Instead, I think this will be a very concentrated effort by the Browns coaching staff to get Watson back into the rhythm of this offense. As a result, I expect Cleveland to rely on the running game with running back Nick Chubb against a Houston defense that has been shredded for 168 yards per game on the ground. Putting our best guesses on Watson aside, this is, by all means, a smash spot for Chubb and this Browns’ power rushing attack against the 30th-ranked DVOA run defense. Bet your Week 13 NFL football picks for FREE by scoring a 100% real cash bonus up to $300 when you use bonus code PREDICT100 at MyBookie Sportsbook!

On the other side of the ball, Houston’s offense has been a trainwreck in recent weeks. As a unit, the offense has been held to 17 points or less in 5 straight games. In last week’s loss to Miami, QB Kyle Allen provided minimal signs of hope in his first start replacing Davis Mills. Allen connected on 26 of 39 passing for 215 yards with one touchdown and two picks. The interceptions have been persistent among all Houston quarterbacks this season, and Allen was constantly looking for scapegoat routes underneath the coverage. Additionally, RB Dameon Pierce, who has been the only bright spot on the offense this season, has been held to just 16 yards on 15 attempts over the last two games, which is about as bad as it gets. Without any reliable way to move the football, Houston’s declining trajectory looks about as reliable as any trend you can pick this week.

While I’m skeptical of how Watson will perform in his return, I have 0 confidence in the Texans at this point in the season, especially on the defensive side of the ball against this Cleveland rushing attack. Give me the Browns and the points!
Jay’s Pick: Take Cleveland -7