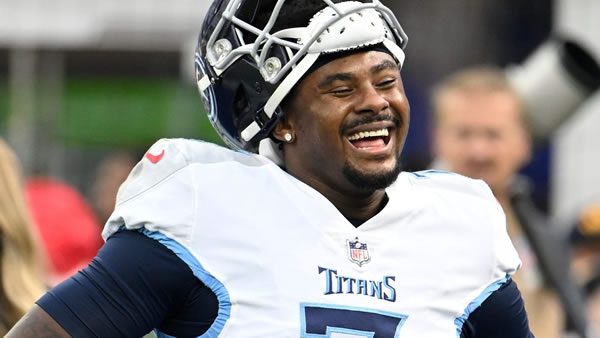 The Dallas Cowboys face the Tennessee Titans in a consequential week 17 Thursday Night Football showdown in Nashville. Last week saw the Titans unable to snap out of their freefall, recipients of a demoralizing 19-14 loss to the one-win Texans at home in a rock-bottom moment for this team. Still knotted with the Jags at 7-8 atop the dilapidated AFC South, they look to catch an off-guard Cowboys team coming into town on the short week. The Cowboys stormed back last week to beat the Eagles, 40-34, and aren’t letting up as the regular season comes to an end. Who can get us the cover in Tennessee on Thursday Night Football?

Can the Titans make a Final Stand?

Late-season issues are one thing, but to lose six straight, culminating in a home loss to Houston, is a damning indictment. Any ammo you’d use for this week could have just as easily applied last week, and it didn’t amount to anything. So, at this point, one hesitates to even entertain the urgency-card, the notion that the Titans can spin out of this and realize that unlike any other team in this state, they’re still in it somehow. And with Dallas showing so much fight as they make a push for a top playoff spot, it doesn’t make the outlook any rosier for the Titans. And while anything can transpire in a one-game window, they are out-manned across almost every area.

Derrick Henry has soldiered on as best he can, still providing good play even with opposing defenses knowing there’s little else the Titans can throw at them offensively. With Tannehill lost for the season and rookie backup Malik Willis showing he cannot throw at this level, it just leaves them with a narrow scope to offensive success. Even with Henry having big games here and there, they aren’t putting up many points. They could almost make it fly if their “D” were on-point, but it’s far from that. One could take solace in the notion that the formidable Titans’ front could curtain the 1-2 Dallas RB-punch of Ezekiel Elliott and Tony Pollard, but aerially, this looks to be a nightmare of a matchup against the Cowboys. Combined with a Tennessee offense that struggles against the league’s worst defenses, this doesn’t really look that great on the surface for Titans’ backers.

Possible Drawbacks for Dallas This Week

The Cowboys showed last week what it means for them to surge at the end of the season, get the best playoff slot they can, and also serve notice to their divisional rival and fellow conference contender. There is no such ax to grind this week in Nashville with a team with which they have no real connection. With three scoring drives in the final six minutes last week, it was a draining game against the Eagles in a 74-point shootout. Not that the sideways Titans are in any position to talk, but Dallas could be in a bit of a letdown spot. It also doesn’t speak well of the Titans that their best case is that maybe their opponent is off-form or looking past them.

While some of the results the Dallas run defense had this season have been up-and-down, they can be porous, and one could see Derrick Henry having one of those monster season-saving performances where he puts the team on his back and takes off. This would be his domain—at home, late in the season, with his team really needing him to bail them out of a bad predicament. It’s a situation in which he has delivered and doing it really big spots, to boot. It is a talented Dallas “D,” and the prospects of them making this Tennessee offense pay for mistakes looms large, but if there’s a way to get to Dallas, maybe this is the way. The guys on this “D” might not be used to what Henry brings to the table on Thursday, having not seen much of the Titans’ star back.

With five wins in six games, with their only loss being in overtime, Dallas has perhaps earned the benefit of the doubt. They’re fighting hard, and relying on a letdown now could be a mistake. While there is some overall margin for error, the way they fought last week, albeit against divisional rival Philadelphia, shows they mean business these last few weeks. With all of the juice Dallas has, aerially with QB Dak Prescott and his talented receiver crew, including what might be a peaking CeeDee Lamb, this Tennessee defense might be out of answers. And while they’re tougher up-front, can they really repel the Dallas two-headed running game working behind that offensive line?

We’ve seen the Titans do an about-face before during the Mike Vrabel regime, and while you can’t really count them out, it might be time to see the writing on the wall for a team that totally died on a vine in the second half of the season. Was there anything stopping them last week from dialing up a winning equation against a Houston team that couldn’t buy a win? Now they face a hungry Dallas team looking to end the season on a crescendo, and it just seems like a weird time for the Titans to get their act together. Even if the strangeness of the season almost suggests this is where the Titans pop back to life, I envision a thorough win for the Cowboys on Thursday.

Loot’s Prediction to Cover the Point Spread: I’m betting on the Dallas Cowboys minus 10 points.

Note: Check out this incredible offer! Deposit $100 to $300 and get a MASSIVE 125% real cash bonus PLUS get a FREE HALF POINT everytime you bet your favorite NFL, college football, NBA and college basketball team! All you have to do is use bonus promo code PREDICTEM when you sign up at GTBets Sportsbook! They have a cool player loyalty rewards program too!