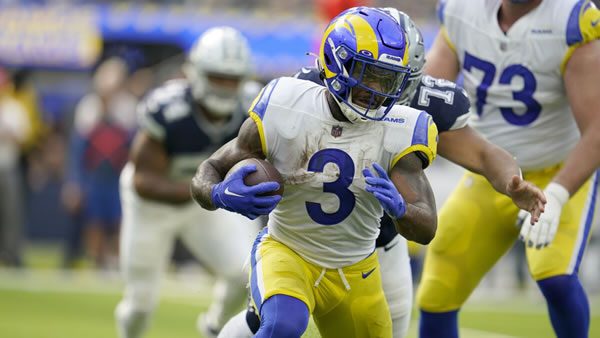 Point Spread: DEN-2.5/LAR +2.5 (Did you know that you could be betting on games at -105 instead of -110? This is SUPER important as it lowers your breakeven percentage! Find this huge money saving offer at BetAnySports!)
Total: O/U 36.5

CBS has to feel like it got a lump of coal in its stocking with this game, as there’s virtually nothing to get the casual fan excited about this matchup. The one saving grace is that neither team will be mailing it in for a higher draft pick because neither team actually owns its first-round pick. The Broncos sent their top choice to Seattle for Russell Wilson, while the Rams traded theirs to Detroit for Matthew Stafford. And while the Seahawks and Lions are battling for the last playoff spot, the Broncos and Rams would both currently own top-five selections if not for those trades. At least for Los Angeles, it got a Super Bowl out of the deal, while Denver’s deal has been filled with nothing but regret.

As for this game, only one of the aforementioned traded quarterbacks will actually suit up. Stafford’s out for the season with a spinal injury, which means Baker Mayfield gets another chance to continue his reclamation project. The Rams almost have to hope that he works out as the starter because Stafford is now 34 and likely doesn’t have a lot left in the tank after suffering his season-ending injury. With no first-round choice coming anytime soon, Los Angeles will use the remainder of this season to see if Mayfield can develop into their solution after Stafford calls it a career.

For Denver, there’s little reason to expect the offense will come to life. The Broncos won last week because their defense shut down the equally disastrous Arizona Cardinals, but Denver has been a defense-heavy team all year that wins in spite of its offense. The Broncos come into this game 0-6 on the road, and the return of Wilson isn’t exactly going to inspire much confidence that they can change that number anytime soon.

How the Public is Betting the Denver/Los Angeles Game

The sharps seem to think being eliminated from playoff contention last week by Green Bay means the end of Los Angeles caring about this season. Since that game, they’ve moved the line from Denver -1 to Denver -2.5, despite 64% of tickets coming in on the Rams. The total has increased from 35.5 to 36.5.

If Latavius Murray can run the way he did against Arizona last week, there just might be some hope for Denver after all. The Broncos managed to put away the Cardinals because Murray had an outstanding performance, rushing for 130 yards and a score on 24 carries. The Broncos’ defense did the rest, and that’s a formula that Denver can follow most games to success.

The problem is that it’s unlikely to work in this game. The Broncos are up against the Rams’ stout run defense, which ranks fourth in the league. To make matters worse, Sean McVay is almost certain to focus on stopping the run and letting Denver try to attack through the air. The secret’s out that Russell Wilson simply is not getting the job done through the air, and the Rams will be perfectly happy to let Russ try to cook and see what happens. At 34 years old, Wilson doesn’t have the physical abilities that made him such a threat in past years.

Ironically, Denver might be better served if Wilson’s concussion keeps him out because the offense looked better with Brett Rypien at the helm. But with coach Nathaniel Hackett announcing Wilson as the starter, it’s going to take a big change for Rypien to see the field.

The Rams got a dose of reality on Monday when they went up to Green Bay and struggled to keep Baker Mayfield upright. Losing Brian Allen didn’t help matters at all, as the Rams’ pass protection was questionable at best without their center on the field. Mayfield has to get better protection and make better decisions, because the Rams haven’t had much of a running threat all year and really aren’t likely to develop one here.

For all the things Denver does wrong on offense, the Broncos do a ton on defense and keep teams in check for the entire game. Only Kansas City, Las Vegas, and Carolina have gotten to 20 points against the Broncos, and the Raiders needed overtime to do it the second time. But the run defense is a bit weaker than the pass defense, so Cam Akers really needs to get established early as a threat. If Los Angeles can scratch out some early yards, Mayfield will have a much better chance of doing some damage to the Broncos’ stronger pass defense.

Up until the loss to Green Bay, the Rams had actually become a sneaky play on the spread, covering their past three games until the 12-point loss at Lambeau. The Rams have lost three of four at home, but they did get a home win as a six-point dog the last time they played at SoFi Stadium against the Raiders.

Meanwhile, Denver has covered in three straight games. That includes the Broncos’ most recent road game, a visit to Baltimore. But Denver has no wins on American soil outside of Colorado (the Broncos managed to win a “road” game in London against Jacksonville). The under had hit eight weeks in a row and 11 out of 12 for Denver, but the numbers might have finally been set too low for the Broncos. Denver’s now cashed the over in consecutive weeks.

SoFi Stadium’s roof takes weather out of the equation.

These teams should slow each other down, and I don’t trust either offense worth anything. Even though the over has hit in back-to-back weeks with the Broncos, I don’t trust that at all, and I think Wilson’s return actually backfires on the Broncos.

I don’t like either team in this matchup, but when you’re in that situation and need to make a pick, the intelligent thing to do is to take the points. When it’s the home team, even better. Give me the Rams. Bet your sports picks for FREE this week by scoring a 100% real cash bonus up to $300 by entering promo code PREDICT100 at MyBookie Sportsbook!)