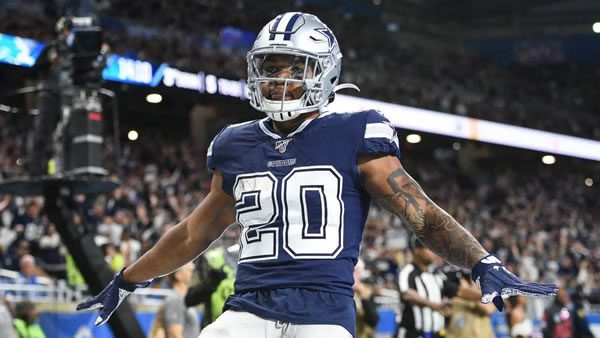 Point Spread: DET +7/DAL -7 (The Pokes should be able to run all day against Detroit’s crappy run D. Grab some Ezekiel Elliott props at Bovada! This wager becomes even more valuable if Dak Prescott doesn’t play!)

Just one week ago, the entire world was praising Cowboys backup QB Cooper Rush following four straight victories, and many were arguing that Rush deserved to be the starter moving forward. However, the Cooper Rush mania officially crashed last Sunday night in a 26-17 loss to the unbeaten Philadelphia Eagles. In the loss, Rush completed just 18 of 38 passes for 181 yards with one touchdown and three interceptions and officially ended any emerging quarterback controversy. On Sunday, star QB Dak Prescott will return from a thumb injury suffered in Week 1 to lead the Cowboys against the Detroit Lions at AT&T Stadium.

The visiting Lions are coming off a much-needed “Bye” last week. After playing in 4 really competitive games to start the season, Detroit suffered a number of injuries which led to a 29-0 blowout loss to the Patriots in week 5. The good news for Detroit is the bye week was timely, and that will help the “health” factor going into Sunday as the team will get several starters back in the lineup. With health a non-factor, the Lions will look for a better performance in week 7. One thing to note is the Lions have been more competitive than most expected going back to the end of last year, and that has helped produce a trend of 10 covers (ATS) in the last 14 games. For this week’s road test to Big D, the Lions will be getting 7 points to keep that trend intact.

While Rush’s performance last week ended any growing quarterback chatter in Big D, QB Dak Prescott is not exactly stepping into a savior role either. Prescott played awful in last year’s playoff loss to the 49ers and backed that up with an awful performance against the Buccaneers in the season opener. Against the Bucs, Prescott completed just 14 of 29 passing for 134 yards and an interception in the opener, which resulted in a 19-3 defeat for the Cowboys. In that same game, Prescott suffered a thumb injury which has kept him sidelined for five games. Therefore in many ways, Prescott has a lot to prove as the Cowboys’ franchise player as he returns to the lineup.

Aside from Prescott’s recent performances, I am eager to see if the Cowboys’ will make many changes offensively now that Prescott has returned. In the last few weeks, Dallas has run the football extremely well behind tailbacks Ezekiel Elliott and Tony Pollard. The control of the ground game, backed with strong defensive play, has made Dallas tough to beat. With Prescott back in the lineup, will Dallas stick to the heavy ground game and lessen the risk of mistakes? Or will Offensive Coordinator Kellen Moore open up the passing attack as he likes to do with Prescott behind center? I think that is something that should be heavily considered for this week’s match-up, as the two different approaches could play an important role in deciding the outcome.

If the Cowboys returned a heavy passing attack, I would be very surprised. Instead, I think the offensive strategy will remain the same, and I think that is especially true this week against Detroit. The reason is because the Lions have absolutely been shredded on the ground this season, giving up an NFL-worst 167 yards per game. As a result, the Cowboys will be best suited to attack with the 1-2 punch of Elliott and Pollard as the major offensive approach. By doing so, the Cowboys can also ensure that Prescott is not forced into any heavy passing game situations in an effort to protect the healing thumb injury. The Cowboys are typically at their best when they run the football well because it opens up the rest of the offense and puts Prescott in more advantageous passing situations. For those reasons, I expect the Dallas offense to have a strong outing on Sunday.

Unfortunately, I’m not so confident that the Lions will be able to keep pace. By all accounts, the Lions’ offense has been a force this season, especially when healthy. QB Jared Goff has played better, with 11 touchdowns and four picks on the season. WR Amon-Ra St. Brown has been one of the best receivers in the entire league. Meanwhile, RB D’Andre Swift and TE T.J. Hockenson have both had monster performances this year as well. For Swift and St. Brown, both players will return from injuries this week which will put Detroit’s offense back to nearly 100%. With that said, I still think the Lions will succumb to a better defensive front in Dallas. The Cowboys’ defense continues to be an under-rated group, but they have carried the team on its back this year with little help from the offense. I think that the Cowboys defense will be a problem again this week, especially upfront in the trenches.

I think this match-up really favors Dallas in a big way, and perhaps Prescott ignites some fire back into this offense with his return. The Lions’ offense will likely make enough plays to make the “over” a probable play. However, I think “the” play is laying the points!
Jay’s Pick: Take the Cowboys -7 Bet your Week 7 NFL predictions for FREE by scoring a 125% real cash bonus up to $400 when you use bonus promo code PREDICTEM at GTBets Sportsbook! You’ll also get a free half point when you bet your favorite NFL, college football, NBA and college basketball teams!