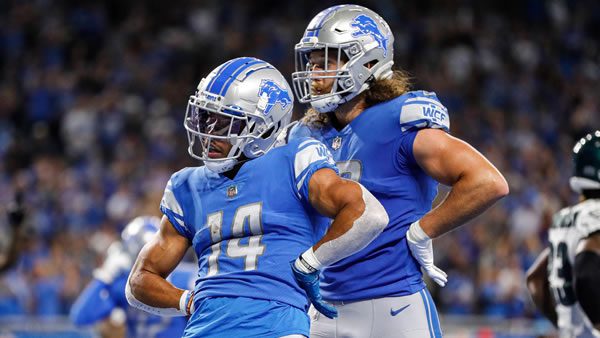 Point Spread: DET/NYJ Pick’em (Bovada – You gotta check these guys out if you live bet games. They’re platform is off the rails awesome and efficient!)

The Detroit Lions come to East Rutherford for a week 15 showdown with the New York Jets on Sunday. Both teams have surpassed expectations, and even with two straight losses dumping them to 7-6, the Jets are still in it. It didn’t work on Sunday against the Bills in a 20-12 loss in Buffalo, and after two straight on the road, they return home and look to get back on the winning track against a streaking Detroit bunch. Sunday’s 34-23 win over 10-2 Minnesota was Detroit’s fifth win in six games as they look to make the unlikeliest of playoff pushes. Who can get it done in East Rutherford on Sunday?

Can the Jets Bounce Back

Some harsh realities are setting in for the Jets now, many of them being injury-related. Word is QB Mike White will be ready come Sunday, but the setbacks have taken a toll, robbing them of a gem in the run-game, with the O-line getting hit hard, along with the D-line taking some hits, as well. They get this one at home but face a red-hot Detroit team whose only loss in the last six games was a close one with the Bills on Thanksgiving. We are starting to see the flip side to the Mike White coin, and while he can offer explosive performances on occasion, he can also struggle, as we’ve seen the last two weeks where White has failed to throw a TD.

One would think against a road Detroit defense would be an ideal time to lend some credibility back to a struggling Jets’ offense, but the Detroit defense has turned things around some. Sure, it has been their vital offense that has been doing most of the heavy lifting, but they’ve definitely picked up their pace. Young studs like CB Jeff Okudah and DE Aidan Hutchinson have started making big plays on a regular basis. A previously ramshackle secondary isn’t easy pickings like it once was, and you’re even seeing the once-maligned Detroit run-defense start to register some more-complete performances.

Possible Issues for Detroit This Week

Despite some better showings lately on defense, this Detroit “D” can still be a sore thumb on an otherwise improving young team with a bright future. It only materialized into 23 points last week, but allowing 425 yards to Kirk Cousins and a bonanza of receptions to Justin Jefferson once again showed what has been a Detroit defense that isn’t hard to exploit. With the Jets deep with running backs who can theoretically do damage along with a young and varied pass-catching crew that has a guy in Mike White who can spike on a given week, this home spot for the Jets shouldn’t really be looked at as being especially tough for this Jets’ offense.

Looking at some of Detroit’s recent opposition, one can maybe make more sense of the production Detroit has been getting on offense. Make no mistake. There is abundant talent on this unit—two good backs in Jamaal Williams and D’Andre Swift, along with a pass-catching crew that has a multitude of proven contributors. QB Jared Goff has reclaimed his prior form and even has some thinking the Lions might stick with him for the foreseeable future. At the same time, most of the defenses they have been beating up on lately have either been downright bad or had one fatal flaw Detroit was able to attack.

With the Jets, the Lions might be facing one of the tougher defensive units they’ve seen in quite a while. Recently, they’ve held Buffalo to 37 points total in two games while also allowing just ten to the Pats. Even when their offense isn’t firing, the “D” can hang in there and give it a go without the support. They found a top corner in Sauce Gardner that they look to use big-time this week, while also hoping sack-machine Quinnen Williams is back after being taken out of the last game.

More Picks: Get our suggested bet backed by analysis for the Pitt/Car Week 15 game >>>

Will Detroit Be Hard to Stop?

The Jets are heading in the wrong direction, taking on a team that has managed to completely reverse momentum after starting the season 1-6. When a team manages to flip the script like that, one can’t neglect their inner resource and toughness. It isn’t always easy to separate a team from that kind of positive inertia when they worked so hard and overcame so much to attain it. The Lions are almost reminiscent of what the Jets were doing earlier in the season when they kept winning against all odds, but maybe the mojo has come to an end, and the Jets are left with the wreckage. Their run-game just isn’t the same, that O-line is beat up, and they’re now relying on their “D” to keep them in games. And not that a team needs to be tip-top in order to beat the Lions, but you’d at least like to see a team near its full powers in this spot, and I’m not sure we can say that about the Jets.

Sticking a fork in the Jets might be premature. There is no question that Mike White and this offense can open it up on Detroit and win a footrace with a big assist from their defense. I think the variety of the Lions’ offense will be a big help this week, as the standouts on the Jets “D” won’t be able to hone in any one person. The Jets lack some of that same offensive variety, with their run-game in a bit of trouble and the form of White being something that is less-than-bankable, even in this spot. I’ll take Detroit.

Loot’s Prediction to Cover the Point Spread: I’m betting on the Detroit Lions in a pick-’em. Question: What odds are you laying when you bet college football games? There’s a 99% chance the answer to this is -110. Did you know that you could be betting at -105 odds? This would save you a TON of money! And it’s FREE! Start saving big bucks by making the switch to reduced juice betting (all sports) at BetAnySports Sportsbook! We’ve advertised them since 2007 with ZERO complaints!