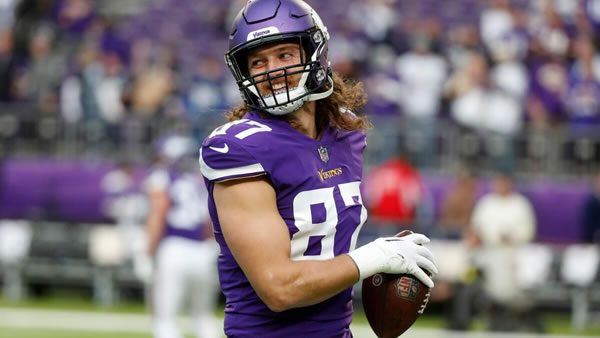 The New York Giants battle the Minnesota Vikings in the NFC Wild Card Playoffs on Sunday in Minneapolis. A routine 29-13 win for the Vikings on Sunday wrapped up a wildly-successful 13-4 regular season that included the NFC North title. They now host a Giants team that rested its starters last week with nothing to gain in a 22-16 loss to the Eagles. Both teams are imperfect but interesting teams no one is really taking seriously. Which of these teams can serve notice in the Wild Card round that they’re for real and get us the cover in Minneapolis?

What Week 16 Tells Us

A week 16 win for the Vikings over the Giants, 27-24 in this building might offer some clues as to the texture of this matchup. It rang true enough. The game wasn’t an anomaly, and it was recent enough to make it pertinent. We saw the Vikes get off to a good start, holding a 10-0 lead in the second quarter, but the Giants’ defense put the squeeze on them, keeping them off the board until the fourth quarter. Giants’ QB Daniel Jones was fruitful through the air, rode the back of Saquon Barkley, and the Giants were right in the game. In the end, some late Kirk Cousins connections to TJ Hockenson and Justin Jefferson were too much for the Giants to overcome, though it took a last-second 61-yard field goal to get the Vikings the win.

This game speaks to several things in particular. One is that for all their firepower, the Vikings can really be picked apart aerially. Jones was big with 334 yards and, even with a no-name receiver crew, was able to exact a lot of damage. Along with a rested Barkley, what prevents that from happening again? Also hidden within the whirlwind of league activity is the fighting spirit we’ve seen for the last month from a Giants’ team that was starting to really look the part of a team that was starting to fold after a fast start that a lot of people thought was a mirage. But even with the Giants playing well that day, they still came up short and showed that their so-so defense can be exploited by a Minnesota offense that can always hit a high gear. The Giants were impressive even with a bad run-defense, keeping the Vikings and Dalvin Cook (questionable) in check for much of the game. But they showed they could be gotten to aerially, as well, especially by Kirk Cousins and Company.

Are the Giants Deceiving?

The Giants started off with a record that was probably better than they really were and some people felt validated when the Giants went into a big swoon. But by the time it was all said and done, they probably went from overrated to underrated. Under Brian Daboll, we did see Daniel Jones become a more-viable weapon. They’re hoping Barkley has fresher legs than he showed at parts late in the season while hoping the collection of dicey receiver talent they have can register similarly to last time.

It’s just that you see the Minnesota embarrassment of riches, and it makes the Giants look underpowered. First off, the chance that guys like Cook or even Mattison can cut loose on this Giants’ run-defense is there. Combine that with guys like Jefferson and Hockenson, two guys who have already feasted on this defense, along with a still dependable red-zone presence in Adam Thielen and a growing force in KJ Osborn, and it seems daunting. The Giants pale in comparison in all areas, with the possible exception of a game-changing presence in Barkley, but one whose best days are probably behind him. The casts of the respective offenses make it seem like this is a big mismatch, along with the fact that it’s a 9-win team in the Giants taking on a 13-win team.

Perhaps the true separation between these two teams is overstated by what we see in these respects. The growth of Jones needs to be accounted for, and he was certainly dangerous in the first game between these teams. He doesn’t have the best stuff around him but has shown an increased ability to create. And despite a good season and a high-powered offense, the Vikings are just now getting a taste of the playoffs after a few years out of the postseason. They won some easy games this season and hit some low valleys along the way, showing they are perhaps more vulnerable than most 13-win teams. And while the Giants have some major defensive drawbacks and the best aerial Minnesota weapons have already delivered in this very spot, Minnesota isn’t in any position to talk with a defense that looms as a threat to undermine the entire operation at any given time.

This would be a spot where I’d be inclined to take the Giants. I think they would normally have some hidden value and might be slightly better than they look, while the opposite might be true about the Vikes. But alas, the books have opened with a standardized line as if it’s a totally evenly-matched game, with the Vikings getting a homefield allowance of points. So, the value component simply isn’t there, barring any line moves during the week. At 4.5, the Giants would be a nice enough pick, perhaps, but with zero cooperation on the point spread, the value that lies in taking a leap of faith on the Giants being a diamond-in-the-rough is gone. Almost out of principle, you have to figure the superior firepower of Minnesota is worth three points. I’ll take the Vikings.

Loot’s Prediction to Cover the Point Spread: I’m betting on the Minnesota Vikings minus 3 points.

Bet your NFL predictions for FREE this week by scoring a 100% real cash bonus up to $500 when you enter bonus promo code PREDICTEM at Betnow Sportsbook!