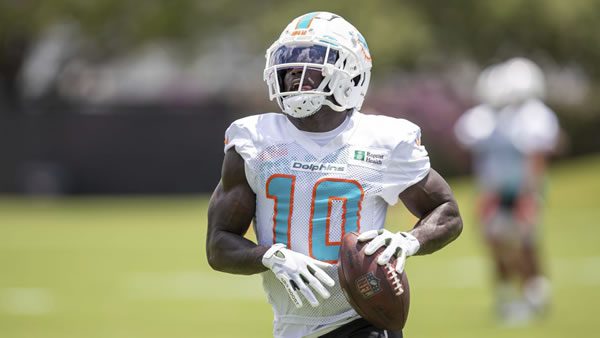 Point Spread: Green Bay +4.5/MIA -4.5 (Did you know that you could be betting on games at -105 instead of -110? This is SUPER important as it lowers your breakeven percentage! Find this huge money saving offer at BetAnySports!)

The end is near for the 2022 NFL regular season, and the playoff picture is coming into focus. Green Bay heads to Miami for a battle of playoff hopefuls, and just playing in Florida on Christmas Day will be a big gift for the Packers, considering the weather that’s about to hit Wisconsin. The Dolphins are clinging to the final wildcard spot in the AFC after losing three straight and sit just one game ahead of both the Jets and Pats, who they will face in the coming weeks. Green Bay beat the L.A. Rams on Monday to post just their second multi-game win streak of the season, and they improved their chances to make the playoffs from 6% to 9%. Those are still long odds, but winning out gives the Packers a 65% of seeing the postseason, and they have two home games to close the season. This is one of the more unique matchups in the league, with these teams playing for just the fourth time since the 2006 season.

Green Bay has been reliable to bet against this season, as Monday’s win was just their third cover of the season, and they are 3-7 against the spread in their last ten on the road. They are 6-2 ATS in the last eight games following an MNF appearance but just 1-4 against the spread following a straight-up win. Miami is good at home with a 20-8 record against the spread over the last three-plus seasons, but they are just 1-4 ATS in their last five immediately after a straight-up loss. The Over has hit in four of the last five Green Bay games, bringing the O/U record to an even 7-7 on the season. Miami has that same 7-7 O/U record on the season, and the Under has been the bet in five of the last six at Hard Rock Stadium. The public is all over the Dolphins, with 65% of bets coming in on Miami so far and 67% like the Over.

Somehow, Green Bay is still zombie-walking to the finish line, and there are plenty of nervous chuckles coming from folks that wrote off Aaron Rodgers a few weeks ago. The Packers haven’t really improved much of late; they still rank 20th in scoring and average just 219 passing yards per game, but they are getting big plays from their young skill guys, and that has opened up more opportunities for a run game that is showing up of late. Aaron Jones needs 63 rushing yards to hit 1,000 on the season, and his 52 receptions lead the team. A.J. Dillon has four scores over the last three weeks and cleared the concussion protocol after exiting the game early last week. Christian Watson saw his four-game scoring streak come to an end, but he remains the team leader with nine total touchdowns, and the attention he is bringing is helping others get open. Romeo Doubs got back on the field last week, and he led all GB receivers in catches (5) and yards (55) against the Rams. Allen Lazard, Randall Cobb, and Robert Tonyan give Aaron Rodgers some trusted complimentary options, and this offense is at least showing more diversity than earlier this season. The defense is still leaky against the run, ranking 29th and giving up nearly 150 yards per game on the ground, but they held the Bears and Rams under 20 points, marking just the second time they have done that in consecutive games this season. Preston Smith leads the team with 7.5 sacks, and Quay Walker has sprinted out to the team lead in tackles. Rasul Douglas is likely the team MVP on that side of the ball, as he is second on the team in tackles, interceptions, and passes defended.

The Dolphins’ season has been mercurial as they started out with three straight wins, then promptly lost three in a row, and then ran off five straight wins before dropping each of the last three. That has led to plenty of questions about what kind of team they actually are, and we will get some answers this week against a Green Bay team that Miami should probably beat. The Fins are 5th in total yards and 9th in scoring at 24.6 points per game, and they have the playmakers to stress Green Bay’s defense. Tua Tagovailoa was an early MVP candidate, and his 24 touchdowns are tied for 5th he has played in two fewer games than most. R,aheem Mostert ran for a season-high 136 yards against Buffalo last week, and he has hit the 100 scrimmage yard mark in five games this season. Tyreek Hill and Jaylen Waddle each have at least 1,100 yards thus far with Hill’s 1,529 trailing only Justin Jefferson. Both receivers have seven touchdowns a piece, and nine Dolphins have at least one receiving score on the season. Miami’s defense has been rather poor at times; they are 26th in points allowed and have the third-fewest takeaways on the season. Jaelan Phillips has seven sacks, and Bradley Chubb has 2.5 since coming over from Denver. The pass rush has benefitted from working in obvious passing situations on many occasions; Green Bay may be more committed to the run if this one stays close.

This could be a toss-up as Green Bay is 2-2 ATS this season when they are an underdog in this range, and Miami is 3-3 when giving up one to six havents. Miami is 2-0 at home in that scenario, but I think that Green Bay’s recent consistency on offense is going to pay off. It was the Aaron Jones show for much of the early season, but a few bumps and bruises to Jones has allowed A.J. Dillon to see more carries, and he has brought success with fresh legs and that punishing style. Green Bay is seeing fewer stacked boxes, with Rodgers making more plays in the passing game, and Watson is suddenly a threat that defenses have to scheme against or pay the price. That said, Miami has playmakers as well, and they have the kind that Green Bay struggles against. The volume of multi-depth crossing routes that Tyreek Hill runs will crack this Packers secondary at some point, and Mostert should be able to keep the Fins ahead of the sticks. Tua is taking care of the ball with just five interceptions on the season, and he should get something close to 30 points on the board. Green Bay can’t keep up, and they fall 30-27, but that is good enough for a cover.

Pick to Cover the Spread: Green Bay. Bet your sports picks for FREE this week by scoring a 100% real cash bonus up to $300 by entering promo code PREDICT100 at MyBookie Sportsbook!)