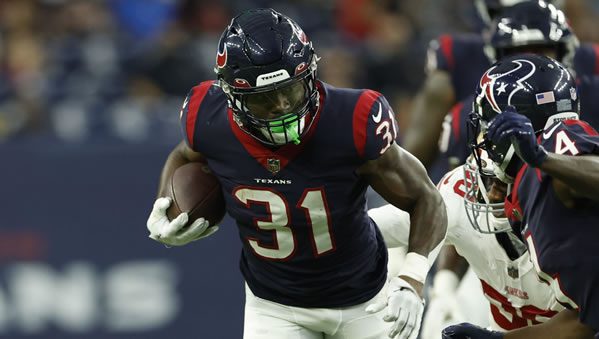 The Houston Texans meet the Jacksonville Jaguars on Sunday in AFC South divisional action. After a promising two-game win streak, the Jaguars ran into the unbeaten Eagles on Sunday, falling short in a 29-21 game on the road. They now return home to take on a plucky Houston Texans team that hasn’t won this season but has only failed to cover the spread once so far. On Sunday, they gave it a good go before falling to the Chargers, 34-24, for their third straight loss. Can they put up a good scrap in this divisional battle, or will the Jaguars illustrate their improvement this season?

Even a downright lousy 2021 Houston team twice beat Jacksonville last season, with Davis Mills showing his fangs behind center for the Texans. That might not mean much now. But the Texans are a winless team that has actually been tougher in spots than some thought they would be. The addition of Dameon Pierce gives them a conventional option in the backfield. They have a little more juice on defense that doesn’t make that side of the ball great, perhaps, but still makes them slightly more respectable than they’ve been recently. We’ve seen a higher level of resistance from a Houston team that really fights for Lovie Smith. Down 21-0 to the Bolts last week, they stormed back and made it 27-24 in the fourth quarter before the Chargers scored the decisive TD. To say the least, it’s not quite the slam-dunk it was last season, and even then, it was good enough for the Jaguars.

Will the Jaguars’ Upturn Resonate?

Even in losing to unbeaten Philly last week, the improvements are palpable with the Jaguars. We see Trevor Lawrence having elevated his game, enhanced with some better stuff around him. Receiver Christian Kirk has lent a new element to an offense that could do damage to the Texans’ secondary. Zay Jones (questionable) has given Lawrence another option. A new tight end in Evan Engram and the emergence of 2021 first-round RB Travis Etienne, combined with existing talent like James Robinson, Marvin Jones, and others, has the Jaguars offense looking like a group on the upswing. And the now two-headed monster at RB and the nifty legs of Lawrence could do damage on a vulnerable Houston run-defense and open up the air-attack, another area of the Houston “D” that can be exploited.

The Jacksonville defense could also have a chance to show its improvement this week. It didn’t work much last week against a really good offense in Philadelphia’s, but in their previous two games, they allowed a combined ten points. And even against the Eagles last week, with the Jaguars’ defense leaving them on the field a lot, they still didn’t completely fold. Josh Allen and Devin Lloyd are giving the Jags’ defense their playmaking aggressive edge once again. They’ve been decent against the pass and pretty good against the run so far, and a home spot for this “D” against Houston would seem like a good get-right spot after allowing damage last week to Philly.

The Texans have a combination of traits that make them scrappy. They have an old-school coach and a lot of young and old marginal NFL figures who are fighting for their careers. At their best, Mills can sling it around, Brandin Cooks makes an impact, and the complimentary pieces are playing over their heads a little bit. But at its worst, the run-game grinds to a halt, Mills is ineffective, Cooks seems mentally out of it, and the whole thing is just flat. Other than an aging Rex Burkhead whose fame comes more from being on good teams than being great himself, a forgotten receiver in Cooks, and a decent-looking low-round rookie back in Dameon Pierce, there’s not much with which Mills can work.

Still, there are subtle categories even within being bad, and maybe Houston is toward the higher end. They’ve made a few changes along both lines of scrimmage, with some boosts in the secondary. Still, this is a spot where you figure James Robinson or maybe Travis Etienne can do some damage after seeing a succession of big running back performances against the Texans in recent weeks. They were still decent against the Broncos and the Chargers in terms of sheer rushing, and nothing about the Jacksonville offense should be considered automatic after a few decent showings. But things like a 38-10 road win against a Chargers team that beat Houston by ten the following week sure has a way of gaining respect. That performance might end up being an outlier at the end of the season, but that could also be said for their failings on offense the following week against the Eagles. As with most things, the truth might lie somewhere in the middle.

I think Houston has a lot of fight in them and a certain spirit that makes them a difficult team to put away, particularly in a divisional context against a team just starting to crawl out of doormat status themselves. Even if one is a buyer in the concept of a Jaguars upturn this season, they still represent an imperfect team that will be prone to going through growing pains. It won’t be smooth sailing every game, and coming off a draining stretch of games in recent weeks, I think Houston will be able to match up well enough to hang in there a little bit. I look for a full sixty-minute effort from Houston, as they get a cover in a tough one from Jacksonville. I’ll take the Texans and the points.

Loot’s Prediction to Cover the Point Spread: I’m betting on the Houston Texans plus 7 points. You can make this point spread +26 by adding it into a massive 19 point teaser offered at Wagerweb Sportsbook!