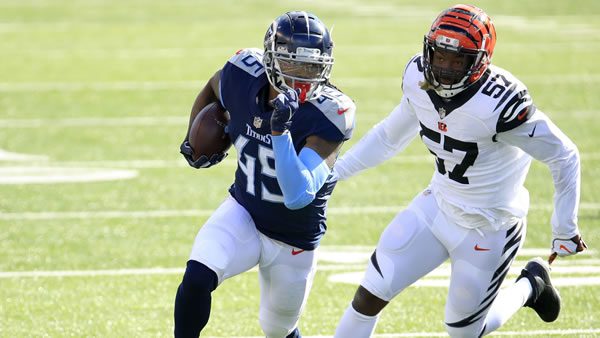 The Houston Texans make the trip to Nashville for a week 11 AFC South showdown with the Tennessee Titans on Sunday. The Texans are coming off a break, where perhaps some extra time helped them figure things out. Leading up to the bye, they lost to the Dolphins, 17-9, for their 8th straight loss after a week one win. A road spot to face a Tennessee team that won its sixth game in a row on Sunday, a tough 23-21 home win over the New Orleans Saints, might not be the best welcome-back for Houston. The Titans look to start building toward a premier playoff spot with what should be a winnable game on Sunday. Will the Titans keep rolling, or can the Texans provide some resistance?

Any Silver Lining for the Texans?

In the midst of this massive losing slide, it’s not easy to find sources of optimism. The offense was moving better under Tyrod Taylor at quarterback, and some corresponding hope was there with his return against Miami. But three picks by Taylor undermined the entire operation, and they came up short once again. But if looking at things with a larger view, it is true that the more-successful moments on offense this season have come with Taylor behind center. That just doesn’t mean that they’re any good with Taylor, just slightly-less terrible for the most part.

Not that the Texans were running the ball well with Mark Ingram in there, but trading him makes them that much more lacking on the ground. Taylor is left to work with a cast of ball-catchers, none of whom have really distinguished themselves this season. A good receiver in Brandin Cooks seems palpably deflated on the field just from his body language. The rest are guys more or less at the end of the line in Danny Amendola, Chris Conley, David Johnson, along with unimpactful youngsters like Nico Collins. The featured players on Houston’s offense would barely get a look in they were on the Titans. That type of firepower differential has a way of resonating.

The Texans will be pitting their last-ranked offense against a Tennessee defense that has been less exploitable over recent weeks. The Texans have nothing to lean upon, ranked near the bottom in the passing and rushing, averaging a league-worst 14 points a game. A better game from Taylor could help, but depending on anything from this offense, this season has proven to be a letdown. Taylor being a darkhorse candidate for production, perhaps offers a glimmer of hope.

While they lost their last game by allowing only 17 points, their three previous games saw them giving up 30+ to good offenses like the one they will face this week. You can’t really hang your hat on the Houston defense, either. The best part of their team might be their pass defense, and it’s still below-average. It is, however, one avenue where they could find some traction. The Houston run-stop is a ghastly unit, and theoretically, they would stand to benefit from the absence of Tennessee running back Derrick Henry. But even a diminished Tennessee run-game with no one really taking the lead could potentially see better returns this week in this cushy spot.

Without Henry, the Tennessee offense is undeniably diminished, but they’ve been able to show that there’s a lot for which to be thankful for on this team. AJ Brown leads the receiver crew, which has a lot of pieces that can produce. On Sunday, we saw a big game from Marcus Johnson, and maybe they’ll get Julio Jones back soon. So don’t expect this offense to fall off a cliff with so many good remaining pieces for Ryan Tannehill to use. And considering the strengths and weaknesses of the Saints’ offense, it in many ways feeds into the hands of a Titans offense that looks to get more-aerial in the absence of their main weapon.

Another sign of a good team is when other parts of the team come together in the face of adversity. With Henry going down, the Tennessee team prospects seemed dim with a defense that was struggling to really pull its share of the load. But that part of the team has tightened up, and recent results include allowing just 3 points to the Chiefs, 16 to the Rams, and 21 last week to the Saints. They’re on a little bit of a roll now, and on the other sideline this week will be a team dealing with quarterback issues, a lack of real weapons, and Taylor could be in a tough spot against an improving secondary that has seriously re-tapped into its vast big-play ability. After watching the Titans get the better of offenses that actually have good quarterbacks with many avenues to success, it’s not easy to picture a Texans team making it work against this “D.”

This could fall into the category of being too easy—picking the far-superior home team on a roll against its sagging road opponent. It’s just that I don’t think a reasonable point spread could be posted that truly captures the disparity between these two teams. And, of course, a Titans’ team with some margin for error could possibly ease up in this spot. I just don’t see that being the way coach Mike Vrabel and this team generally operates. I see things getting really rough for the Texans on both sides of the ball this week, as the Titans cruise to the win and cover at home.

Loot’s Prediction to Cover the Point Spread: I’m betting on the Tennessee Titans minus 10 points. Bet your Texans vs. Titans pick and ALL your week 11 NFL predictions for FREE by taking advantage of a 100% REAL CASH bonus on your first deposit of $100 to $300 at MyBookie Sportsbook! (Must use bonus code PREDICT100 in order to qualify for the special bonus). Click here to sign up now!