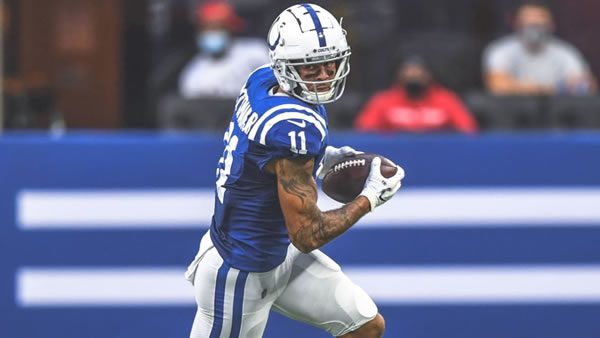 The Indianapolis Colts invade Upstate New York to take on the Bills in Orchard Park on Sunday. BETANYSPORT (They let you bet on football at -105 instead of -110) has set the line at Bills -7 and set the over/under at 50. Let’s grab the touchdown and roll with the Colts to keep this game close or maybe sneak out a win. Here is the handicap.

Indy Is Rounding into Form

The Colts limped out of the gate in 2021, losing their first three games and being on the brink of having their season washed away. The primary cause for the slow start was pre-season injuries that kept new QB Carson Wentz on the sideline, delaying his acclimation to the new system and developing timing with his receivers. There were also injuries to key offensive linemen and T.Y. Hilton that weakened coach Frank Reich’s squad in September. As those issues injury issues have resolved themselves, the Colts are moving up the ladder to the top half of the AFC. They have won five of their last seven, and their two losses have both been in overtime to Baltimore and the Titans. With the exception of a couple of bonehead plays against Tennessee in week 8, Wentz is becoming everything Reich hoped for. With Derrick Henry on the shelf, Indy now boasts the best running game in the league, with Jonathan Taylor carrying the load. He averages 5.8 yards per attempt and runs behind what is probably the best run-blocking line going. This week, Reich’s game plan will continue to be balanced and take advantage of play-action passing when the defense cheats up. The Colts will be up against a very stingy defense in Buffalo but look for continued success from Indy’s offense.

Buffalo came into the season expecting their defense would be improved, and all expectations have been exceeded. The Bills are the number 1 ranked defense in both points allowed and yards per play against. They have six times held their opponents to 20 points or less and only once given up more than 23. This will be a strength vs. strength battle as Buffalo boasts the number 3 run defense in the league, allowing only 84 yards per game. Buffalo definitely has an elite defense, but their stats have benefitted from playing some soft offenses. They have been fortunate to face five of the seven worst offenses in the NFL.

When their competition has been better, they still have been solid, but not the #1 defense. Good offensive lines travel well, and the Bills will face a good offensive line this week. The Indy run game has only been held under 100 yards twice this year, and I doubt the Bills will be able to accomplish that this week. Indy will be able to move the ball and put points on the board.

The Bills Offense Is Sputtering

“Josh Allen has accuracy issues” was the consensus opinion of the Bills’ QB prior to 2020, then he completed 70% of his passes, and it was widely believed the accuracy issue had been cured. After ten games in 2021, there is again concern about the accuracy. Allen has slightly regressed in 2020, completing only 66% of his passes this year. He hasn’t been able to connect on the long passes to Stefon Diggs on a regular basis, though they did hook up last week.

Buffalo shows little interest in trying to run the ball, as evidenced by having only 160 rushing attempts total by their backfield on the season and running the ball only nine times in their Week 9 loss to Jacksonville. So Buffalo will live and die with Allen, which over the past four weeks, has resulted in the Bills being shut down by the Jags and being to 10 points through 3 quarters against the Dolphins. Without a running game, they will be challenged this week by a solid Colts D.

Indy’s defense has also improved as the season has matured. Indy is ranked 13th, allowing 23 points per game, but most importantly for this week, they are 21st against the pass allowing 7.7 yards per pass attempt.

Indy will play a lot of zone and get pretty good pressure with their front 4. They have sacked opposing QBs 22 times on the season and should be able to pressure Allen in this one. Buffalo will probably not lay an egg as they did against Jacksonville two weeks ago, scoring only six points, but don’t expect them to score above 30 as they have done against the weaker teams they have faced this year.

This Will Be a Heavyweight Fight

The NFL takes on a different feel when we get into the double-digit weeks, and this Week 11 match-up will take on that feel. This is an important game as the playoff picture starts to take shape. Indy has fought back to being in the playoff hunt, while the Bills are in the hunt for the #1 seed in the AFC but have not been able to pull away from the Patriots in the AFC East. This game in front of the Bills Mafia will start to get us ready for December and January football. Both teams will be a little conservative and feel each other out while making sure not to make a big mistake. Both quarterbacks have the capability to lead a big drive in the 4th quarter, but both can also make a big mistake early in the game and put their team in a hole.
Both coaches will be willing to get deep into the games with chances to win, rather than making a high-risk move in the first half that could put them behind. The conservative nature of the game favors the team getting the points, so 7 points is a lot with this game script.

Take the Points With the Colts

This game has all the makings of the team that has the ball last having a chance to kick a field goal and bring home the victory. Let’s take the 7 points with Colts. Bet your Colts vs. Bills pick and ALL your week 11 NFL predictions for FREE by taking advantage of a 100% REAL CASH bonus on your first deposit of $100 to $300 at MyBookie Sportsbook! (Must use bonus code PREDICT100 in order to qualify for the special bonus). Click here to sign up now!