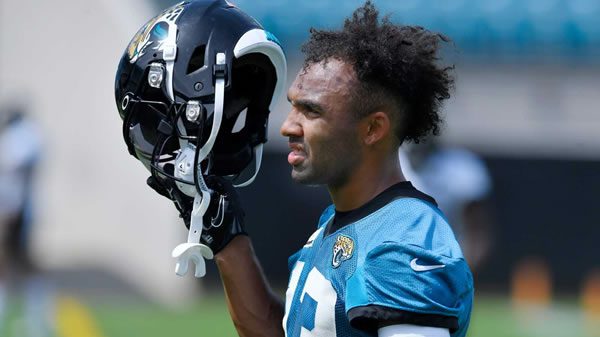 Point Spread: JAC +2/IND -2 (Bovada – 50% bonus from the football betting site with the BEST live betting platform on the planet!)

The Jacksonville Jaguars take on the Indianapolis Colts at Lucas Oil Stadium on Sunday in AFC South divisional action. Indianapolis is in a decent position to reverse an earlier-season loss to the Jags, getting this one at home, coming off the long week, and with a little wind in their sails after a hard-earned TNF overtime win over Denver, 12-9. The Jaguars, meanwhile, last played on Sunday, in a coming-down-to-earth showing against the previously winless Texans at home in an unsightly 13-6 loss. Jacksonville will now look to recapture the form they showed the previous several weeks. Who can get us the cover on Sunday in Indy?

Look Back at Part One

While conference teams that play twice a year provides some data that can be helpful, it isn’t always so with so many things on the playing field changing between the time teams play their first and second games. But when you’re in week 6 and those teams already played, it stands out a little more. When that result is a 24-0 shutout win for the Jaguars, it’s even more daunting for potential Colts backers. One could point out that the Colts get this one at home after the long week, with the Jags coming off a draining loss on Sunday. They will also have Michael Pittman for this one.

Both team’s relative trajectories are also worth mentioning. The Colts came back to beat the Chiefs before losing a one-score game to the Titans, leading up to their road-win last Thursday. They’re not knocking anyone’s socks off to be sure. But in a subtle way, they’ve managed to right the ship from the team that was playing to an ugly tie with Houston and getting shut out by the Jags to start the season. On the other hand, you might have a Jags team where less and less people are pointing to them as an up-and-comer. Not that two losses changes everything, but the Jaguars have more issues to work out than some may have thought and we’ve seen that illustrated the last few weeks. Losing to the Eagles was one thing, but to manage two field goals against Houston at home, both coming at the beginning and at the end of the game, was really shocking. Chalk it up as a one-week lapse if you wish, but there are some troubling signs.

Will Jags Bounce Back?

When a struggling team latches onto some success as the Jaguars did early this season and they lose it, the urgency is going to be high in order to not squander their hard-earned progress under new head coach Doug Pederson. We have seen an elevation in form from Trevor Lawrence this season. His aerial package is enhanced from last season. They added a lot of pieces and it was paying off—until recently. Their O-line is still a sticking point and while James Robinson and Travis Etienne are two good backs, it doesn’t always fire and there is a lack of continuity between the two young running backs. Lawrence can labor at times against pressing defenses and is still prone to showcasing that developmental form the Jaguars are eager for him to grow out of and become a more-reliable force behind center.

Still, we’re seeing a better Jacksonville defense this year overall. There was the week one foible against the Commanders and they didn’t hold up well against the Eagles a few weeks ago. Then again, not many defenses are going to look good against what we’ve seen from the Eagles early this season. Otherwise, they’ve been very steady. We saw them garner zero support from their offense last week, still able to hang in there almost the whole game against the Texans. They stymied a good Chargers’ offense. And of course, we saw them blank this very Colts team, with the pass-defense very active, while completely taking Jonathan Taylor out of the game. Can they do it again, this time on the road?

At 2-2-1, this is a fork in the road moment for the Colts. A win here will send them to 3-2-1, not a bad start considering not a lot of things going right early for the Colts. A loss against a team that shut them out sends them into week 7 with two wins on the year and what would have to be a pretty rotten feeling in their heads. They’re at home and in their division and they need to make it happen this week. It’s not as if the Jaguars were particularly adept at curtailing Taylor in their first game, but the Colts just had to go to the air, as they fell behind quickly. Without Pittman, it wasn’t easy and with Taylor getting eased out of the game with the Colts in a deficit, the options weren’t that plentiful. With a few players more warmed up in this offense since then, Ryan finding a little more of a stride in this offense, and the return of Pittman, maybe this offense can play more to its strengths this week. We will have to confirm that Taylor is OK after missing last week with a sprained ankle, but taking that game off and the long week should have him ready to go.

I don’t think this is just any game for these teams. Every NFL game is important for teams jockeying for position, but this is a crossroads for both of these AFC North squads this week. I look for the Colts to bounce back and show the Jags and everyone else that week 2 was an aberration. Sure, the Jaguars aren’t the same pushover they were the last few seasons, but I’d look for Taylor to put a bigger imprint on this game, with Ryan having his top option back with Pittman also paying off in this spot. I’ll take the Colts.

Loot’s Prediction to Cover the Point Spread: I’m betting on the Indianapolis Colts minus 2 points. Bet your Week Six NFL predictions for FREE by scoring a 100% real cash bonus up to $500 when you use bonus code PREDICTEM on the Special Offers page after your first deposit at the web’s oldest sports betting site: Everygame Sportsbook!