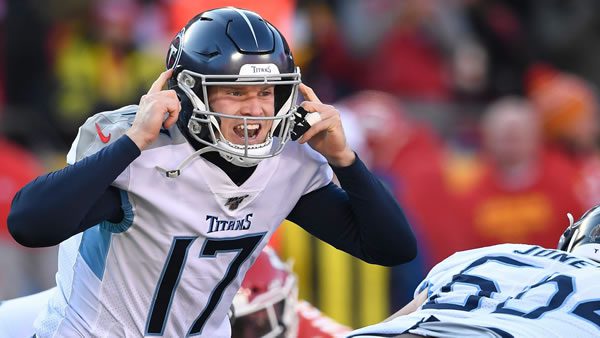 The Jacksonville Jaguars come to Nashville for a week 14 AFC South divisional battle with the Tennessee Titans on Sunday. Neither team had a good time of it last week and will look to get back on the right track on Sunday. For the Titans, a 35-10 loss to the Eagles last week was distressing, as it was their second straight defeat. While still holding a big lead divisionally, they look to get back to winning this week. A 4-8 incoming Jags team might offer some relief, and on Sunday, they were also on the bad end of a lopsided loss, as the Lions wiped them out, 40-14. Who can bring us home the cover on Sunday?

Are the Titans OK?

In this context, the answer is probably yes. This is their first matchup this season with their divisional rivals, and they’ve been solid in this context. Against recent opposition like the Bengals or Eagles, Tennessee’s lack of offensive options and the dicey state of their secondary seems to resonate on a higher level. While we’ve seen recent aerial flair from Lawrence, Jacksonville’s deficiencies on both sides of the ball would appear to make for some easier sledding for the Titans this week.

The prospects of a late-season Derrick Henry getting into gear is appetizing, but a couple of subpar games have him looking a little rough at a time when he’s supposed to be hitting his high notes. With Treylon Burks suffering a concussion last week, they might be even thinner offensively than normal. The options are not great, with Robert Woods having not really delivered, as the whole Tennessee aerial attack has really gone into the dumps. Opposing defenses can hone in on Henry, and you wonder if their inability to find answers will derail what was shaping into a nice season a few weeks ago. Still, let’s not forget what happened after they lost their first two games of the season, beating every team except the Chiefs in OT up until this recent two-week period.

What Can the Jags Do About It?

The question is impossible to answer, as a lot of what we’re getting out of the Jaguars lately doesn’t make a ton of sense. After coming back to beat the Ravens the previous week, we saw their offense grind to a relative halt on Sunday. With it coming in Detroit, where opposing offenses have not really been struggling to put up points, it was a bad look for Lawrence and Company as the Lions took over completely. To have a good running back like Travis Etienne, along with a good young QB in Lawrence slinging it to some talented receiving options, it was not easy to envision that outcome on Sunday. Sure, Detroit was a good choice to win, but most would have pictured a more back-and-forth affair.

There is a lack of bankability on this Jags’ team that makes it difficult for potential backers. Just as you think they’ve hit a groove, they reverse form. And when you think they’re finished, they spring back to life. And trying to gauge it from week to week has the same feel as betting on roulette. On the one hand, this is their second straight road game and third in four games. They could be a little ragged after a run of some tough games. Then again, they’re facing a Titans team that is on the rocks. Lawrence, theoretically, should be able to take it to this Titans’ secondary. Jacksonville’s own issues in pass defense shouldn’t really cost them this week, and they’ve been effective in spots against some pretty good running backs. It’s just that any sort of sensical analysis seems to somehow miss capturing the essence of this team.

While coach Mike Vrabel has found it hard taking this Titans team from contender to true Super Bowl threat, they’ve managed to remain a playoff presence for several seasons ongoing. During that time, they’ve faced different regular season issues and crises, usually responding well. When needing a gust of positivity, they usually get it. Granted, their overall status isn’t in the same peril as other teams who are starting to sag, as no other team in the AFC South has more than four wins. But the margin of error aside, a team like Tennessee isn’t looking to die at the finish line en route to another early playoff exit. They have an agenda, and I look for their coaching staff and team to work hard to get back on point this week. At home against a four-win team is a sort of line-in-the-sand moment for this team, and they will be in real trouble if they come up short in this spot. I think the last 3-4 Titans’ seasons has taught us to recognize that urgency can be a factor.

The prospects of Lawrence having a good day and taking it to this Tennessee defense is scary for Titans supporters, as is what appears to be a narrow path to offensive success. A struggling Henry and an aerial crew that is in peril is an offense that can certainly be flat on a given week. I just think one needs to look less at the individual parts of this Titans team, which might not paint a great image, and defer to their team-identity, coaching, and ability to respond to in-season crises such as this one. I’m going with the Titans this week.

Loot’s Prediction to Cover the Point Spread: I’m betting on the Tennessee Titans minus 3.5 points. Bet your Week 14 NFL picks for FREE by scoring a 100% real cash bonus up to $500 when you enter bonus code PREDICTEM at Betnow Sportsbook!