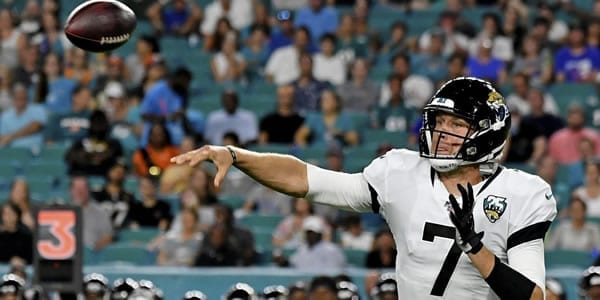 In Nick Foles’ first game back behind center in Jacksonville following a broken clavicle in the opening match of the season, the Jaguars were trounced by the Indianapolis Colts 33-13. To be fair, the loss had little to do with Foles, who completed 33 of 47 passing for 296 yards with two touchdowns and one pick. The storyline around the Jaguars loss was mainly the result of the Colts dominant ground game that amassed 264 rushing yards against the Jacksonville defense. This week the Jaguars attempt to snap a two-game losing skid as they look to rebound in a road trip against the Tennessee Titans at Nissan Stadium.

The battle for the division crown in the AFC South is completely wide open with just two games separating the entire division. The Colts and Texans are currently tied for 1st place but have failed to produce the consistency for anyone to believe they can hold onto the top spot. As a result, the 5-5 SU Titans are in the thick of the division race and enter week 12’s contest against the Jaguars in a must-win situation to keep their most probabilistic playoff hopes alive.

The Titans have won 3 of their last four games and are returning from a week 11 bye following an impressive victory over the Chiefs in their previous outing. The key to keeping the momentum going this week is to remain solid on the defensive side of the football. Tennessee currently ranks 7th in the NFL yielding just 19.7 points per game and will have the luxury of facing a somewhat predictable Jaguars offense that is producing only 18.9 points per game which ranks 26th in the NFL.

On paper, this particular match-up is pretty even with very few clear advantages on either side of the ball for either team. The Jaguars beat the Titans 20-7 in week 3 in Jacksonville, but it was one of the Titans’ worst performances of the year. QB Marcus Mariota was extremely inefficient, hitting just 23 of 40 passing and was sacked nine times. Obviously, Mariota is no longer the man under center in Tennessee as that role now belongs to Ryan Tannehill, who continues to play surprisingly well. Furthermore, where the Jaguars had most of the early season momentum, that pendulum has swung in favor of the Titans ahead of this week 12 showdown with the Jaguars fading.

As stated above, the Jaguars defense shined in their week three win over the Titans capturing nine sacks in a dominating effort on Thursday Night Football. However, the Jaguars’ defense has been shredded in each of their last two games against division opponents resulting in lopsided losses. The Colts amassed 264 rushing yards against the Jaguars in last week’s 33-13 defeat, and the defense will face another difficult test this Sunday against a similarly dangerous power rushing attack led by running back Derrick Henry. Before the bye, Henry had his best performance of the year carrying the ball 23 times for 188 yards with two touchdowns in the upset victory against the Chiefs. Henry has often become the focal point for Tennessee offense late in the year, and I expect Head Coach Mike Vrabel to feed their workhorse following the Jaguars’ struggles to stop the run. The question is, can Jacksonville turn things around with their run stop defense in nearly the exact same circumstance on the road against a divisional opponent? Personally, I have my doubts considering that these two teams are trending in opposite directions.

The Jaguars are just 2-4 ATS in the last six games and only 6-14 SU in their previous 20 games. The Titans are trending at the .500 mark on the season at 5-5 ATS. Tennessee has hit the “over” in four of the last five games and also hit the “over” in 7 of the previous 9 games at home. The Titans also hold the H2H advantage over their AFC South rival covering the spread in 4 of the last five meetings. Tennessee has also won 5 straight meetings at home.

Jay’s Pick to Cover the Point Spread: I like the way the Titans are playing, and this is a sweet revenge spot. Take Tennessee -3