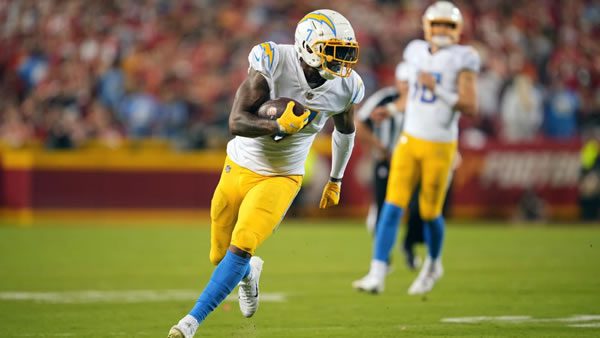 The Los Angeles Chargers take on the Atlanta Falcons on Sunday at Mercedes Benz Stadium. The Chargers are coming off their bye-week, which followed a tough 37-23 loss at home to Seattle. They look to have used the time well against a Falcons team that enters Week 9 an unlikely division leader, sitting atop the NFC South at 4-4 following a wild 37-34 win over Carolina on Sunday when a crazy series of events led to a win that surely pumped wind into their sails. Will the Chargers start looking like the team people expected to see? Or can Atlanta continue making the most of what they have and thrive in this high-stakes home spot?

On one hand, it’s early enough in the season to not overly consider fatigue. But when one team is coming off a draining overtime game where every facet of football drama played out, and the opponent is coming off a bye, it’s something to consider. The game with the Panthers was nuts. That’s the kind of game that can drain a team. In Atlanta’s favor, they won a game that shook out with them assuming first place. They are also home again, nice, and dug in to face these challenges.

Atlanta Being Made to Look Better Than They Are?

While the Chargers are far from immune in putting forth a total clunker against any level of team, maybe needing multiple things to go right against Carolina to win shows a Falcons team that isn’t really thriving. If not for DJ Moore’s untimely TD celebration, that game might have been over with an easier XP. But alas, it’s not just a gutty win over Carolina that justifies their standing. On the one hand, you see a retread QB in Mariota, someone whose rarely capable of drawing much from what isn’t a bad pass-catching crew with a nice rookie in Drake London and TE Kyle Pitts. Cordarrelle Patterson should be returning and has been a legit weapon in this offense, but the backfield is a mish-mosh. Still, with their depth of backs and Mariota being able to use his feet, they are very productive in their own way. The offense is nothing that is going to excite anyone, but it’s not as bad as it looks.

Getting cornerback AJ Terrell back should help what is a suffering Atlanta pass defense. It might not have shown last week, but it certainly did the prior week in a lopsided beating at the hands of the Bengals. To the Falcons’ credit, it was the only time they were embarrassed this season, while the Chargers have seen that happen twice in ugly fashion, including their last game. Still, against a rested Chargers’ offense that has been working on things to spring this thing loose, Atlanta’s pass defense looms as a major liability this week. Even though they’re on the road and in foreign territory in Atlanta, the thoughts of this Chargers’ aerial offense in this dome against this secondary should be a bit frightening for potential Atlanta backers this week.

Can the Chargers Bounce Back?

Chargers backers this season are going to have to accept the wide range of play we’ve seen and will continue to see. They could improve and start becoming the contender a lot of people envisioned. What we are seeing is a team that, while having excuses for being this way, is still underperforming on both sides of the ball. The offense doesn’t fire as often as it should. They can get some big games from Austin Ekeler, while it’s fair to say the Chargers can’t really run the ball well. Aerially, Herbert is doing fine, but his receiver crew has been bitten by the injury bug, as has most parts of the team. We’re seeing roles less spelled out. Mike Williams doesn’t fire every week, and now he’s out. Keenan Allen has missed time while getting others to step up has been hard. It went from a vital offense with clear roles last season to more of a displeasing cabaret approach that hasn’t taken hold this season.

By week 9, we need to acknowledge more of what we see and less of what we thought we’d see. Not that the Chargers can’t get on the right track. But with key losses across all areas, they’re in a diminished state from where they started the season. It was one thing to fancy the Chargers as a vital offense with star contributors and a defense packed with pro bowl talent. Take away their best pass-rusher, a left tackle, a top corner, and two of their top three receivers, and it’s not the same team, is it? Maybe we need to just wrap our heads around that a little more, especially for those of us who may have been hopeful about the Bolts from a fan point-of-view.

Offense dominates one’s thoughts when looking at these games, and it’s hard not to side with the Chargers on that front. That’s especially the case when the scenario doesn’t get much better for the Falcons when turning your attention to their defense. And truth be told, that Atlanta secondary is a major concern against Justin Herbert, but maybe a bit less so in this instance. With Terrell back, he could make a difference on a Chargers’ team without its number-one receiver. The Chargers are a bit thin in this area and can’t really run the ball much. All in all, I see a tough game where having points might feel good at the end of the game. I’ll take the Falcons.

Loot’s Prediction to Cover the Point Spread: I’m betting on the Atlanta Falcons plus 3 points. Bet your Week 9 NFL picks for FREE by scoring a 100% real cash bonus up to $300 when you use bonus promo code PREDICT100 at MyBookie Sportsbook!