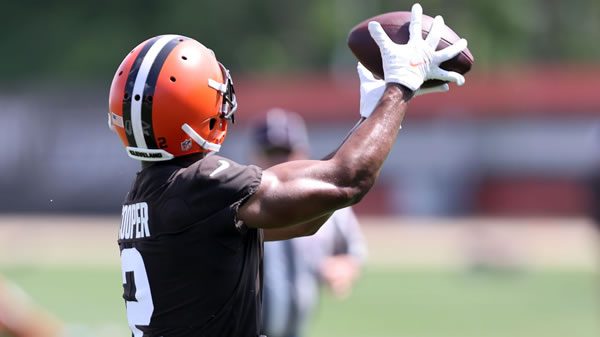 The Los Angeles Chargers come to FirstEnergy Stadium on Sunday to take on the Cleveland Browns in a battle of 2-2 AFC teams. The Chargers were able to even their record at .500 last week in a 34-24 win over the Texans on the road. They take to the road again this week to take on a Browns team that returns home after dropping a tough 23-20 game to the Falcons last week. Which of these two teams can nose above the .500 mark this week? Let’s break it down!

Both teams are already dealing with less-than-ideal scenarios. This wasn’t what the Browns had in mind this season, with QB Jacoby Brissett at the helm. While being a mobile quarterback who adds another ground angle to go along with Nick Chubb and Kareem Hunt, the aerial game is going to suffer more weeks than not. Brissett can work behind a strong line and employ a run game that is the envy of most teams, but that one-dimensional approach could suffer against a Chargers’ defense high on talent, especially in the secondary. And while one shouldn’t expect the Cleveland defense to melt without Myles Garrett, this is a spot where he really would have come in handy.

With Joey Bosa already missing time, a banged-up Keenan Allen and Justin Herbert, and an offensive line that has already taken some bad hits, it’s been hard for the Chargers to find their footing. We started to see a more characteristic showing last week, albeit against an exploitable Houston “D.” But seeing Herbert throw for 340 yards, with Austin Ekeler getting three TDs, and Mike Williams having a big day receiving is what we’re going to need to see more of if the Chargers want to break from the pack of conference also-rans. But even in victory, we saw a lot of issues. One is how the Chargers’ offense needs to be a better job in the second half or just when holding leads in general. After going up 21-0 on the Texans, they had to withstand a rally, with the Texans making it 27-24 with a lot of time left in the 4th quarter.

Hope for the Browns

Something about the Browns tends to make people low-rate them. That’s especially the case when the other team has a bright young QB, wide receivers with all-pro credentials, and a versatile running back, along with a “D” loaded with talent and big names. Brissett isn’t getting anyone’s blood pumping, nor is the pedestrian aerial corps of Amari Cooper, Donovan Peoples-Jones, and David Njoku. But with Brissett’s legs, the power-running of Chubb, and the key contributions of Hunt, it’s an offense that can do damage while not really providing a ton of highlights. And getting this at home against a Chargers team on its second road-spot in a row doesn’t hurt either.

Besides the game before last when the Browns came on strong to beat the Steelers convincingly, they’ve exclusively been in really close games. It’s hardly enough to warrant a pattern, but with their style of play, it makes sense that they’d be in a lot of close ones, something that would likely get their backers a cover if that repeated it this week. In games against the Panthers, Falcons, and Jets, it was back and forth, with little to separate the teams. One might say the Chargers are a cut above those teams, and that’s true, but the Browns’ ability to hang in there, combined with the Bolts seemingly always playing down to the level of their opponent, could give way to a tightly-contested game.

Granted, the Chargers looked good on paper to open the season, but maybe the recipe for success in an easily-disrupted one. Bosa being gone really makes that defensive front less-fierce. Ekeler scoring three times speaks loudest, but the Chargers still haven’t been able to really establish a run-game this season. And with the Browns being a little better against the pass, maybe this isn’t such a bad matchup for them. Maybe a Chargers’ front that has been compromised will allow the Cleveland defense to wreak some havoc, even without Garrett.

They may not have hit the ground running, back-to-back road spots aren’t ideal, and the Browns’ defense aren’t pushovers, but of all the aspects in this game, it’s the Chargers’ offense that is most poised for a spike in form. Presumably, Herbert should stand to gain from putting more time between himself and that rib injury. That line took some blows, but if Allen is back in there, they’re at pretty much full strength in the skill positions. The Cleveland defense has seen the likes of Mayfield, Flacco, Trubisky, and Mariota behind center this season so far. Herbert might be a different bowl of wax altogether.

On one hand, the Chargers have appeared anything but dependable this season, an underachieving team that might have some excuses but still hasn’t come close to rising to the level many thought. Then again, if they had been living up to that billing, you’d be laying a lot more than a FG going into this week. I’m prepared to take the leap of faith that the Chargers’ defense can roll with the punches of the Cleveland run-game enough while allowing the offense to do its thing—getting out of town with the win and the cover in week five.

Loot’s Prediction to Cover the Point Spread: I’m betting on the Los Angeles Chargers minus three points. Did you know that Wagerweb Sportsbook offers 19-point NFL teasers? Yes! You can move the line up to 19 points!