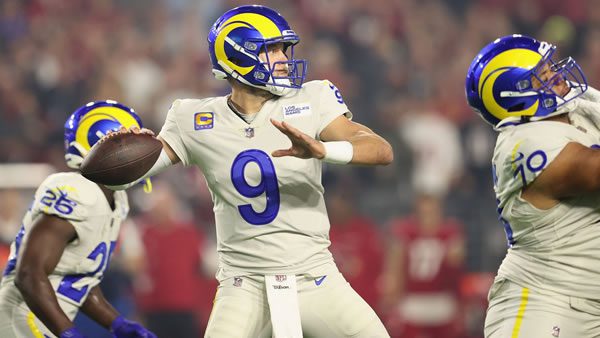 Sean McVay brings his NFC West-leading LA Rams across the country to battle the Ravens in Baltimore on Sunday. BETANYSPORTS (You can bet on games at -105 odds there!) has made the Rams three-point favorites and put the over/under at 45.5. This is a bad spot for the Rams, playing their second consecutive road game traveling through two or three time zones, coming off four consecutive straight up and ATS wins, and now sitting in first place in the NFC West. The Ravens, meanwhile, have been decimated with injuries and have lost their last four games to fall out of the playoff picture. Let’s look for John Harbaugh to rally the troops and keep this game within a field goal, and maybe sneak out a win to have a chance to make an appearance in the playoffs. Here are three reasons.

The Ravens Will Be Healthier

The Baltimore offense runs through Lamar Jackson, but Jackson has been off the field since early in the week 14 game with Cleveland. Tyler Huntley stepped in for Jackson and nearly beat the Browns and then the Packers in week 15. Last week, Huntley missed the game due to Covid leaving journeyman Josh Johnson to play under center, and he couldn’t keep up with the Joe Burrow’s career day. Jackson should return to action this week against LA, which will give the Ravens a huge upgrade at quarterback and instill some hope into the offense. Even if Jackson is not back, Huntley should be able to clear the Covid protocol and be in uniform. Jackson changes the game whenever he is on the field, but Huntley had the Ravens within a 2 point conversion of beating the NFC leading Packers 2 weeks ago. Sammy Watkins should also be back on the field, which will give another receiving weapon for Baltimore. The Baltimore passing offense has been solid over the past month, with Mark Andrews balling out to keep the offense functioning and putting points on the board.

The defense should also be healthier this week. Last week multiple Raven defenders missed the game due to Covid or other injuries. Last week Baltimore had six defensive players that missed at least some practice time due to injury issues and seven others that missed the game due to Covid. In the Bengals game, the Ravens defense often wasn’t lined up correctly and missed assignments. DC Don Martindale wants to run complex blitzes and confuse opponent QBs and offensive lines, but the only players confused last week were the Raven defenders. This week Martindale should have six starters that weren’t available last week, including veterans Calais Campbell, Justin Houston, and Jimmy Smith. The defense is still missing its best defensive backs, which continues to be an issue, but at least they will be able to run a defensive game plan. They should be able to create some pressure against Matthew Stafford that could lead to some turnovers.

The Rams Are Due For A Letdown

Sean McVay’s squad sprinted out of the gate to start the year at 7-1 and be one of the favorites to represent the NFC in the Super Bowl. They responded to that strong start by losing three games in a row against playoff teams before getting back on track to win four in a row – three of which were against teams that will not make the playoffs. In their losses, the biggest problem for the Rams has been QB Matthew Stafford not taking care of the ball. Stafford is a gunslinger that has never risen to the pressures of the big game and has thrown six interceptions in the Rams’ four losses. LA has a 3-4 record against teams that are expected to make the playoffs and are 2-5 ATS in those games. With the Rams coming off a very physical win against the Vikings while watching their division rival Cardinals fall last week, look for another letdown this week in Baltimore. Stafford threw three more picks last week in Minnesota, and the Rams were lucky to come away with a win. The second consecutive game traveling across the country, plus this game being outside in Baltimore, doesn’t bode well for the Ram offense.

The Ram defense has also been different squads against good and bad opponents. LA’s defense has superstars Aaron Donald and Jalen Ramsey, who can shut down offenses with 1 or 2 players to key on but have struggled when they face multiple weapons. Arizona with Kyler Murray has presented big problems for the Ram defense, and Jackson will do the same this week in Baltimore. LA won’t have an answer for Andrews, and if Jackson is even 80% healthy, he should be able to scramble to pick up first downs. LA’s defense looked great recently against the Jags and injury-riddled Seahawks, but don’t expect the same dominant performance this week in Baltimore.

Get the Zman’s Chiefs vs. Bengals Point Spread Bet >>>

Baltimore Has Everything On The Line

The Ravens are a proud team that expects to make the playoffs every year. If they win their final two games, that should be enough to put them in the playoffs. Harbaugh will have his team dialed in to make one final stand to get into the playoffs this week in front of the home crowd. After an embarrassing loss to the Bengals last week, the team will be focused on avenging that poor showing. After the Ravens got stomped by the Bengals in week 7, Baltimore responded with a win the following week against the Vikings. Harbaugh covers the spread at a 62% clip as an underdog, so he has proven he can motivate the troops when their back is against the wall. On the other hand, the McVay / Stafford combo is 3-4 ATS as road favorites this year. This will be the most hostile environment the Rams have played in this year, plus the worst weather they have dealt with, which should also tilt the scale to the Ravens.

Play the Ravens With the Points

The play in Baltimore this week is to take the points with the home dog Ravens. Look for the spread to move to 3½ before the kick-off on Sunday buy a Raven ticket. Kick 2022 off right by making the switch to a better sportsbook! Get a 50% real cash bonus, rebates on ALL your bets; win or lose, play poker, bet on ALL games live-in-progress and receive some of the fastest Bitcoin payouts on the web! Find all this and more at Bovada Sportsbook! (Credit cards work there too!)