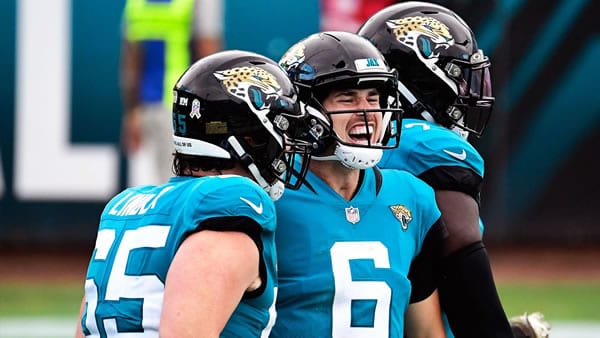 While one team is pretty much done with this season, the other is trying to get a measure of consistency. The Packers remain at the top of a relatively weak NFC North, but they’re struggling to play two quality games in a row. Since the bye week, Green Bay has dusted both Houston and San Francisco, but got drilled by Tampa Bay and couldn’t stop Minnesota’s ground game. Unsurprisingly, those two losses were the Packers’ lowest-scoring games of the year.

Points shouldn’t be a problem against Jacksonville, which has proven to be utterly inept on defense ever since its opening victory over the Colts. Since then, the Jaguars have lost seven straight and haven’t held anybody under 27 points in that stretch, with six of those seeing the opponent put up 30 or more. Of course, that number is a death sentence against the Packers: Green Bay is 6-0 when it gets to 30 and 0-2 when it doesn’t.

How the Public is Betting the Jacksonville/Green Bay Game

The public is going all-in on the Packers, as 68 percent of the tickets have come in on Green Bay despite the heavy line. The line hasn’t budged despite that number, but the total has fallen from 54.5 to 50.

With Gardner Minshew on the bench, Jacksonville has actually gotten more aggressive. That’s for two main reasons. First, Jacksonville really has nothing to lose and might as well throw caution to the wind, given that they’re now 1-7 and won’t be anywhere close to the playoffs. Second, Jake Luton actually has a fairly strong arm, and the Jaguars believe their best chance to win is to let him take chances, despite his lack of experience at the NFL level.

It ended up working out decently against Houston, as Luton only tossed one interception in 38 passes and ended up with 304 passing yards. The problem is that Jacksonville pretty much has to pass because the running game just isn’t getting it done. James Robinson ended up with 99 rushing yards, but he needed 25 carries to do it, which just isn’t good enough when you need to keep a potent offense like the Packers off the field. In order to have any hope of staying competitive, Jacksonville will have to throw it often, and that means that D.J. Chark has to have another big game. Against Houston, he caught seven passes for 146 yards and a touchdown and was a big part of Luton’s success.

Throwing this Jacksonville defense against Aaron Rodgers seems to be like throwing a steak to a starving lion. Rodgers looked like his usual self last week against San Francisco, tossing for four touchdowns against the 49ers’ patchwork lineup. Jacksonville doesn’t have the excuse of being banged up the way San Francisco is; this is just a weak defense that hasn’t been able to slow down anyone except Indianapolis.

That’s a recipe for disaster against just about anyone, but especially against Rodgers, who’s proving that he’s not slowing down even at age 36. He’s as good as ever this season, tossing 24 touchdown passes against just two interceptions. What makes Rodgers’ performance even more impressive is that virtually everyone on the field knows who the ball is going to and still can’t stop it. Davante Adams has more targets than the Packers’ next two receivers combined, and he’s still managed to go for 675 receiving yards and eight touchdowns on the season. With Aaron Jones in the backfield, the Packers do actually have a solid ground component to their attack, but having Rodgers means they don’t have to use it often.

Some underdogs tend to rise up and play to the level of their competition, making them excellent spread bets. Jacksonville is not one of those teams. The Jaguars have covered in just one of their past six games and appear pretty content to simply accept their destiny as one of the weakest teams in the NFL and the high draft pick that comes with that dishonor. To be completely fair, that applies mostly to the Jaguars’ defense, as Jacksonville has hit the over in six of its past eight games as an underdog.

Meanwhile, Green Bay tends to get its job done pretty regularly. The Packers have covered the number in five of their past seven games as a favorite and are 4-1 ATS in their past five games at Lambeau Field. The road team is 4-1 ATS in the past five games in this series, but seeing as how one of those games took place in 2001 when Jake Luton was in kindergarten, don’t read too much into that trend.

This could be an ugly day for football, as temperatures will be in the mid-40s, and wind and rain are in the forecast. Winds will be blowing west-northwest 14 miles an hour, with about a quarter-inch of rain expected.

This one looks fairly straightforward, as Jacksonville is a bad team going nowhere and doesn’t look at all capable of stopping the Packers’ offense. The Jaguars will put up some points here and there, but they’re not going to be able to keep pace with Rodgers and company, especially not in lousy Wisconsin weather. I expect this to be a comfortable win for the Packers, and I’ll take them to cover the number. Bet this game and ALL your Week Ten NFL Wagers at -105 instead of -110! Dumping your expensive bookie and placing your bets at reduced juice at BAS Sportsbook will save you THOUSANDS of dollars that you could be using to make more bets! Click here to start saving $ today!