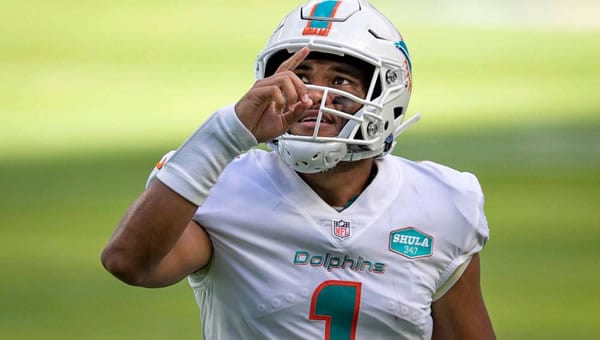 The Miami Dolphins take on the Detroit Lions on Sunday in a week eight matchup from Ford Field. A Sunday Night Football win over the Steelers, 16-10, restored some order with a Dolphins team that had dropped three in a row. They’re hoping Tua Tagovailoa can stay out of trouble and get this team back on the right track, and while the win over the Steelers wasn’t ultra-impressive, it got them back over .500 and ready to move on with the rest of the season. They might be licking their chops coming into Detroit to face the 1-5 Lions. A 24-6 loss to the Cowboys really had them looking bad, and they need to find answers quickly. Who can get us the cover in the “D” this week?

At least earlier in the season, we were seeing some offensive fireworks, which led to some exciting games and some covers for their backers. In the last few weeks, however, they have gotten in the end zone zero times. That’s quite the shift from the team that scored 140 points in their first four games, with Jared Goff connecting with his receivers with impunity, along with big running plays from D’Andre Swift (questionable) and Jamaal Williams. And sure, injuries have played a role, with Swift and top receiver Amon-Ra St. Brown missing time. But they were making it work before amidst injuries, and it’s like they just fell off a cliff. Before, they were a dangerous X-factor, adept at dragging opponents into shootouts where anything could happen. Now, they’re just getting their butts kicked and for that to occur against the Cowboys and Patriots makes it all the more concerning.

With guys like DJ Chark, Swift, and St. Brown banged up, among others, their offense is a little dinged up heading into the midway point of the season. Backers of the Lions have to brace for the occasional Goff clunker, and we’ve seen it the last two weeks. And even with two field goals worth of scoring in the last two weeks, it might actually be the Detroit defense that is the greater cause for concern. The Miami offense has been in the dumps for the past month with all their QB issues and having to dig deep into the barrel to try to make it work. With Tua having gotten a game under his belt and now going against a team where they can conceivably pound the ball with Raheem Mostert, maybe this is a spot where Tua can let it fly a little and really make it work against a team where opposing offenses have had their way more often than not.

Time for Another Miami Spurt?

With wins over the Bills and the Ravens, the Dolphins were looking good, and maybe their recent woes can be chalked up as stuff that wasn’t really their fault. Not that everything just picks up where it left off when Tua was hurt, and I think we saw that being the case in a muted offensive performance against Pittsburgh on Sunday night. Perhaps some caution will be exercised with Tua until he regains his confidence. The recent showings of Mostert have been timely and offer this offense another dimension on the ground. But when Tua starts hitting his stride aerially, he has mega-weapons like Tyreek Hill and Jaylen Waddle that he can wield on opposing defenses. And the notion of the air attack working in this spot is hardly far-fetched.

Just as we saw with a high-powered Lions offense accompanied by a defense spinning its wheels, one must acknowledge the valleys we’ve seen the Miami defense occupy this season. Their front hasn’t been bad, and even if they’re not creating enough pass-rushing juice, they’ve still managed to curb the opposing run game. Aerially is a different matter, and while it might not manifest against teams like the Steelers, the more-vital aerial offenses they face seem to be getting a lot of production. That’s hard to justify on behalf of a Detroit offense that is on sabbatical, but if the Lions were to find some renewed success through the air, why not this week at home against this defense?

Why Neglecting Detroit Could be Costly

Things have undoubtedly gotten shaky with the Lions the last two weeks, but it could be a time where it’s important to remember the context. So far at Ford Field, we’ve seen this Lions’ offense pouring it on—both aerially and on the ground. It happened when they were healthy and when guys were missing. So they go to New England and Dallas for two road games in consecutive weeks and hit a wall. Understandably, public confidence is at a major low. The books adjust. But maybe we figure that they’re back at home, where they’ve been nothing but productive on offense. Defense? Well, that’s another story. Nevertheless, it’s a chance for Goff and Co. to get back on track in a spot that looks somewhat advantageous.

On one hand, it’s not working out for Detroit. They haven’t covered the spread in a month, and despite the offensive fireworks we’ve seen, they’re still a 1-5 team going nowhere. But those offensive fireworks could resurface, and at home in this spot, I sense they might. Miami might be back on the upswing again, but they’re not what they were in the first 3-4 weeks of the season. I don’t doubt that Mostert and maybe even the aerial attack can get loose again this week, but with St. Brown looking like he’s going to play and all the options Detroit has on offense, I sense they can hang in there in this one and get the cover at home. I’ll take the Lions.

Loot’s Prediction to Cover the Point Spread: I’m betting on the Detroit Lions plus 3 points.