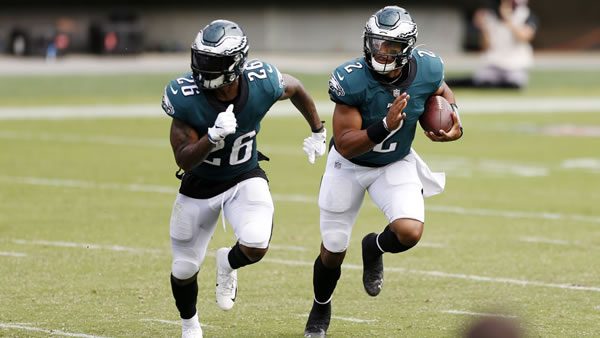 The Pittsburgh Steelers make the short trip to Lincoln Financial Field for a week eight showdown with the Philadelphia Eagles on Sunday. The Steelers are coming off a 16-10 loss to Miami on Sunday night, facing a tough turnaround road game against the unbeaten Eagles, who are coming off a bye, to boot. It’s a really tough spot for a Steelers team that has dropped five of six since a week one win. The Eagles last played two weeks ago in a 26-17 win over the Cowboys and look to keep it going against the Steelers this week. Let’s see if we can figure out who will get us the cover on Sunday!

Not a lot seems to shake out well for the Steelers heading into this one. They’re on a bit of a short week where they were on the road, again taking to the road this week against a rested, unbeaten team coming off the bye. That doesn’t bode well at all. The Steelers’ offense is in shambles, and taking on one of the more complete defenses in the league doesn’t seem to help. And even if the Steelers’ defense is a little better against the run than the pass, the Eagles have such a multitude of ways to create production that you can’t help but wonder if the Pittsburgh defense didn’t do that bad the last few weeks against Miami and Tampa will be able to have the same results this week.

It really seems like a particularly bad matchup for Pittsburgh. The Eagles are strong in the trenches, and the Steelers are not. The Eagles are seeing their QB thrive, along with a run game that can really deliver. Meanwhile, Pittsburgh is struggling to put anything good together. Their run game is in the toilet, they can’t get good QB play, and we see a talented crew of pass-catchers basically being wasted. On paper, they have a lot of the same things the Eagles have on offense—a back with a good track record, some talented receivers, and a rising force at tight end. But between poor QB play and a shoddy line, they just can’t make it work, whereas the Eagles are soaring as we approach the midway point of the season.

Now, with the bye week, the Eagles aren’t as likely to be caught sleeping with the notion of a massively-struggling team coming into town where Philly might be trying to sneak in a phone-in performance to preserve energy for bigger games. That can happen on a continuum where a team might take a sort of informal off-week in light of an inferior opponent coming into town. With the bye being a time to gather oneself mentally, that seems less likely this week. If Pittsburgh wants to hang in there this week, they’re going to have to rely on strictly football-related success and not whimsical thoughts of the Eagles not being fully present mentally.

Best Hopes for the Steelers to Cover

They are getting a nice amount of points, with the spread being ten as of press time. Against a Philadelphia team that has scored in the 20s in five of their six games, that offers a decent value. After all, the Steelers do have ample talent on offense, with guys like Najee Harris, Diontae Johnson, George Pickens, Pat Freiermuth, and others. Maybe they can string together a few TD drives, and they’d conceivably be in the mix against a medium-performing Eagles’ offense. And while the Steelers’ defense will never be mistaken as good, and a lot of their firepower and playmaking has been consumed by the injury bug, they still can get plays on this side of the ball with Alex Highsmith getting after the QB in a big way, with Minkah Fitzpatrick and Cameron Sutton having combined for five picks. A big play from this side of the ball could go a long way.

Can the Eagles Recipe Be Disrupted?

At this level of play, there is almost a certain automaticity with the Eagles’ formula for success. They have so many options on how to apply the run-game between Jalen Hurts and running backs Miles Sanders, Kenneth Gainwell, and others. If one source isn’t delivering, they have other options. The same applies through the air, where AJ Brown is growing in his first season in this offense, along with De’Vonta Smith showing improvement and the steady contributions of TE Dallas Goedert. With that offensive line playing the way it is, it might be one thing to anticipate off-days, but it’s not a recipe that is going to completely flop either, especially in this spot. The same goes for a defense that is tough all around. CB Darius Slay is shutting guys down. The line is applying pressure, and you just wonder how Steelers’ QB Kenny Pickett will fare in this environment against this defense.

Despite the Eagles’ success this season, it’s not like we’re seeing exaggerated point-totals or even blowouts, for that matter. When teams run the ball as much as the Eagles, laying a double-digit number can provide some rightful discomfort. But between the Steelers’ issues along both lines of scrimmage, the diminishing returns they’re getting on offense, and some key personnel losses, it’s hard to find much optimism other than hoping for a slow day from the Eagles, a backdoor cover, or some other unforeseen twist or turn that throws a different light on this. I think the matchup and stylistic elements shake out well for the Eagles this week. I’m going with Philadelphia this week.

Loot’s Prediction to Cover the Point Spread: I’m betting on the Philadelphia Eagles minus 10 points.