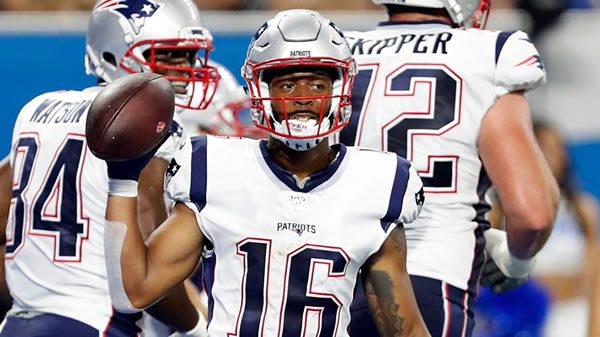 The New England Patriots come to MetLife Stadium on Sunday for an AFC East battle with the New York Jets. Standing out most is the Jets’ 5-2 start, coming off a 16-9 road win over the Broncos last week. They now look to keep building on that with a win over their longtime tormentors in the New England Patriots. On MNF, the Pats fell to 3-4 in an ugly 33-14 home loss to the Bears. After a decent run, they really hit a wall last week. Can they bounce back for this big divisional showdown, or will the Jets keep marching on? Let’s break it down!

It has to be upsetting for Jets’ backers to see rookie RB Breece Hall going down for the season with an ACL. They do have Michael Carter and just traded for James Robinson. On paper, that would give them a promising two-headed RB attack, but it’s hard to believe losing a big-play guy like Hall won’t come at a cost. Still, QB Zach Wilson looks good in his return. You see the Jets moving away from aerial frenzies and finding more balance team-wide. With the run game and the rise of the Jets’ defense, they’re starting to look like a real team. With abundant riches in the receiver category, solid remaining juice in the backfield, and rising elements of the team across other areas, maybe they can hide the loss of Hall or at least patch it up and carry on as they have been.

While banged up in certain areas, New England’s concerns are less along the lines of injuries and more about the identity of their team. They’re in a bit of a QB conundrum, with Bailey Zappe getting more out of this offense than Mac Jones. But it seems like there’s an issue establishing roles. RB Rhamondre Stevenson is doing great in spots, but with Damien Harris, it’s more of a mish-mosh. They have viable targets with receivers like Jakobi Meyers, DeVante Parker, Nelson Agholor, and Tyquan Thornton. They have good tight ends with Hunter Henry and Jonnu Smith. But it’s just too many mouths to feed with what this offense is realistically able to produce.

The Difficulty with New England

It’s easy to get down on the Pats when they blow it as they did on MNF. The real trouble comes when you try to lock them into any kind of concrete perception. They’re a team that can change forms on a dime. Heading into MNF’s disaster, they had just clobbered Cleveland and Detroit. While that might not mean a whole lot in the big picture, it does attest to their erratic form—both good and bad. At their best, they can run the heck out of the ball, even getting some aerial fireworks lately with Zappe behind center. Then it can fall flat all of a sudden, with bad QB play, an indecipherable mish-mosh on offense, and a leaky defense has them looking like one of the worst teams in the league. In this familiar divisional context, it’s not beyond Bill Belichick and his staff to make the right adjustments and have them looking different come Sunday.

It’s just hard for a bettor to determine what to favor. Do you look at New England and note what appears to be one of the worst rosters in the league, how they got crushed by the Bears at home, and how they can hit rock bottom without any reason or advance notice? Or do you look at how they’ve snapped out of it before already this season more than once? To acknowledge their floor means you have to accept their ceiling, and with the mid-week planning acumen of Belichick and their overall track record in the post-Brady era of reversing course when appearing to be nosediving, you can never bank on the Patriots being as bad as you thought they’d be.

Extra Motivation for the Jets?

It seems the tables may have finally turned where the Jets can possibly break their 12-game slide to the Patriots. You’d think it would carry at least a little extra motivation as opposed to just playing another team. There have been some woeful beatings and brutal come-from-behind wins over the years, and there are some guys on that Jets sideline who remember some of those. First, they want to show that losing who was their most valuable offensive player hasn’t left them diminished. And a win over their longtime rival could provide that little boost that the Jets could really use now. They’re at home, they’re doing well, and the Patriots appear to be in some trouble. What better time than now?

Beyond losing Hall, the Jets also lost another offensive lineman, and with the discontent of WR Elijah Moore, one can’t say things are unraveling, but this would stand out as a potentially vulnerable week for the Jets where we might start to see some gaps in their armor. I’d like to think Belichick would see the wisdom in going with the hot hand in Zappe and bring more out of what is actually a pretty deep aerial cast, albeit without a real number-one go-to guy upon which they can rely. I see the Pats running the ball well and getting out of MetLife with the win and cover on Sunday. I’m going with New England in this one.

Loot’s Prediction to Cover the Point Spread: I’m betting on the New England Patriots minus 1.5 points.