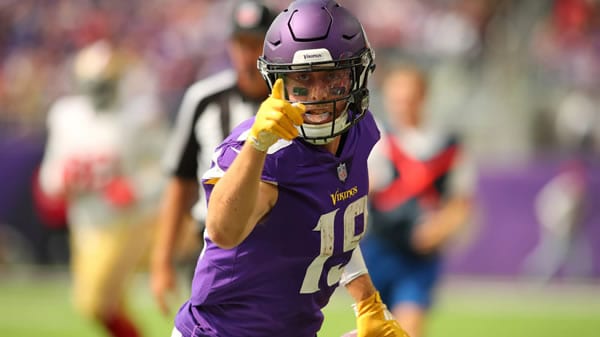 Point Spread: MIN -3.5/WAS +3.5 (Bovada – They have TONS of props for this game! Jefferson has a great matchup and is going to rip the corner a new butt!)

The Minnesota Vikings come to FedEx Field on Sunday for an NFC battle with the Washington Commanders. The Vikings kept things going in the right direction on Sunday with a 34-26 win over the Arizona Cardinals. They look for their sixth win in a row this weekend in a game thats suddenly not as easy as it looked a few weeks ago. On Sunday, the Commanders were able to nip the Colts at the wire when a late TD got them the 17-16 win on the road. At 4-4, Washington looks to keep the ball rolling this week in what would really be a validating win. Lets break it down!

The Vikes have won five in a row, while the Commanders win on Sunday quietly gave them their third win in a row. The Vikings are thriving under first-year head coach Kevin OConnell, sitting atop an NFC North where someone is going to have to go on a big run or the Vikes are going to need to fall on their faces to change things. They are getting some other aspects of their offense besides star receiver Justin Jefferson to start delivering, as Kirk Cousins is having a good season commandeering this Minnesota offense. Not impervious to taking damage aerially, theyve seen that part of their defense start coming along, in addition to an already stout run defense that has been thriving lately.

With Carson Wentz getting hurt, we once again saw Taylor Heinicke ascend to the role of starting QB for the Commanders. While not a star and incapable of some of the ceiling play Wentz would flash on occasion, he has a certain understated competence that at least doesnt undermine the entire Washington offensive operation. He also has some chemistry with guys on this offense that Wentz had yet to tap into when he was starting. We see RB Antonio Gibson getting some better results, with incoming Brian Robinson offering some additional upside out of the backfield. We also see a more-active WR Terry McLaurin, while WR Curtis Samuel continues to be used in some creative ways.

Can the Washington Defense Impact This Game?

Mild optimism on the Washington offense notwithstanding, theyre not going to be able to keep pace with anything resembling a peak-running Minnesota offense this week. Washington is at home, which can help, but theyre going to need a big assist from their defense this week. And the last handful of weeks have forced us to undergo a bit of a reappraisal after a troubling start for this “D.” After being exploited readily early on, weve seen a Washington defense allow a total of 64 points in their last four games. No one has been embarrassing them lately and that even goes for teams like the Cowboys and Eagles. We see that high-end front starting to pay off with the pass-rush and rigidity against the run. Meanwhile, a beleaguered secondary has been more respectable in recent weeks.

Lets also point out that there are a number of defenses in the league who would look good when taking on teams like Chicago, a sideways Green Bay team, and a Colts team starting a rookie at quarterback. Still, even within that context you can see them getting better. And that improved rigidity against the run could help this week against Dalvin Cook, the Vikings back who seems to be snapping into a higher gear as we get to the seasons mid-point. Even so, the Vikings are fully intact on offense and that means there are a number of different ways that they can get you. The run-game is strong and diverse, with Alexander Mattison capably spelling Cook. And other than Jefferson, the Vikings have a good tight end in Irv Smith (questionable), the veteran know-how of red-zone maven Adam Thielen, and other guys who can pop on a given week. Its a lot for a Washington “D” to contain, even if they are on a little surge and deserve just due.

When a team is seeing their offense take off, it can hide some shortcomings on the other side of the ball. Thats doubly the case when that team is successful as the Vikes have been with their 6-1 start and being in first place in the NFC North. And while you could definitely say their secondary is a drawback, their defense really hasnt been bad from an overall sense. In a few cases, weve even seen them step up with some big plays in critical situations, as we did last Sunday in their one-score win over a pumped-up Arizona squad. Weve also seen troubling sequences of things really hitting the rocks with this defense. They have both benefitted from playing some off-key offenses and getting bailed out, but these are the kinds of unsuspecting spots where that dicey Minnesota “D” can resonate.

Minnesota putting an end to Washingtons little surge with a big offensive showing wouldnt register much surprise in this spot. But given the road-spot, Washingtons newfound resourcefulness on offense, and a defense that has found its stride, I dont see this as being a cinch. I suspect Washington can see just enough big plays on both sides of the ball to keep this one close. Its a position that is taken with a fair amount of trepidation with there being little reason to question Minnesota heading into week nine, but Im going with the Commanders in this one. Ill take Washington and the points.

Loot’s Prediction to Cover the Point Spread: Im betting on the Washington Commanders plus 3.5 points. Bet your Week Nine NFL predictions FREE by scoring a 125% real cash bonus up to $400 AND get to bet your favorite teams with a FREE half point every week when you enter bonus code PREDICTEM when you register and deposit at GTBets Sportsbook!