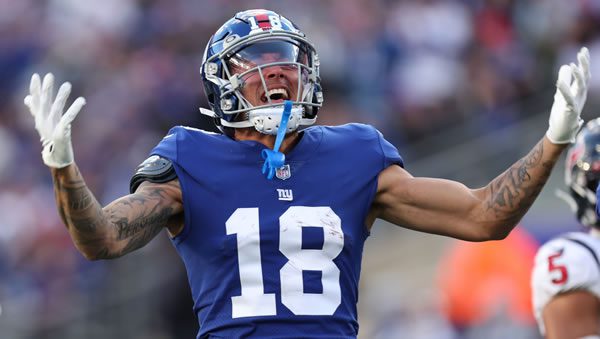 The New York Giants battle the Philadelphia Eagles in the NFC Divisional round of the playoffs on Saturday at Lincoln Financial Field. These familiar NFC East foes will meet for the third time this season, with the stakes being a lot higher for this one. The Giants took care of the Vikings in the wild-card round last week, winning a 31-24 road game. They again take to the road in this postseason, this time against the top seed in the conference with the Eagles. It won’t be easy, and in two recent games, in week 14 and week 18, the Giants lost to this team. Granted, the Giants were resting their starters in week 18, so that result doesn’t count for much. But in week 14, the Eagles hammered the Giants 48-22. The Eagles ran the ball down the Giants’ throats, with Jalen Hurts connecting well with AJ Brown and DeVonta Smith. Can the Giants reverse that equation this week, or are we looking at another routine win for the Eagles here? Let’s break it down!

A Different Giants Team This Time Around?

The last time the Giants played the Eagles in a game that meant something, they were in that period of the season where they had started fading after a fast start. The thought was that reality had caught up to a Giants team that may have benefitted from some good fortune and easier opposition. But what got the Giants here was that they refused to stay down, fighting hard to get here and get their team pointed in the right direction again. I think the Giants will get more credit for this late-season about-face after beating the Vikes on the road last week, but maybe in an overall sense, people aren’t quite making enough of an accommodation for the Giants’ fighting spirit. How better coaching turned Daniel Jones and the team around, and how they bounced back after looking like it was probably curtains on the season.

Whether this is enough to shield the Giants from some harsh football realities this week remains to be seen. The multi-pronged run game of the Eagles can really do damage on this Giants’ defensive front. The strength of the Eagles’ offensive line takes a little punch off that Giants’ front. The run-game is applied differently than what the Giants have been seeing. And there’s not one thing the Giants can focus on, as the Eagles can get you with a variety of running possibilities, along with the fine receiver and tight end play they get. For a dicey Giants’ defense, the sheer variety of the Eagles’ attack could be potentially overwhelming. So while the Giants possess a certain Cinderella mojo and could be a team whose heart lifts them above, there are certain football-related realties that might be too immense to overcome.

Red Flags for the Eagles?

For the Eagles, they might be the best team in the league for all we know. But as they are just starting this run of being a really good team, it’s not so cemented that it’s impossible to imagine a problem. Other than the two other playoff teams from the NFC East, the Eagles faced only two other teams that made it to the postseason this year. Injuries notwithstanding, the season ended in somewhat ragged fashion, with two losses in weeks 16 and 17, followed by a one-score win over a Giants’ team that wasn’t really trying, as their postseason slot was already locked up. Getting Hurts back in the last week was beneficial, as he was able to shake loose any rust, then get a week to rest. Still, it’s not like the Eagles come into this spot with their best head of steam of the season. It’s possible that the status of left tackle Lane Johnson plays a bigger role than some think, as things up front tend to erode quickly without their hallmark O-lineman in the fold.

If there is a way to get to the Eagles, it might be on the ground. This is an area where the Giants can get some success, first with the resurgent Saquon Barkley hungrily running, with Jones chipping in with his legs. And if they have success on the ground, it could open things up a bit aerially, where the Giants have a receiver crew that might be no-name but is deceptively effective. Either way, it’s not impossible to picture the Giants applying some of the same tactics the Eagles favor and hanging in there—running their QB, relying on the bell-cow back, and attempting to get over the hump with some fine receiver play. While the Eagles have a pronounced edge aerially with their talent at receiver, just maybe the Jones/Barkley ground package can surpass what Hurts and Miles Sanders can deliver on Saturday.

More Picks: Get our Cincinnati at Buffalo predicted point spread winner for their AFC Divisional game >>>

Even a Giants apologist would admit there is some uncertainty in this matchup, where a Giants team in the first year of their uptick period could hit a big wall in the form of the top-seeded Eagles. This is a spot where the shakiness of the Giants’ defense could shine through a bit more this week. Still, the Giants faced a team last week that had ample aerial and ground weaponry, and they were able to hold it together. While a win might be a bit of an overly-optimistic view for the Giants, I find it perfectly reasonable to forecast that they give Philly a little sweat, hang in there, and cover the spread on Saturday. I’ll take the Giants.

Loot’s Prediction to Cover the Point Spread: I’m betting on the New York Giants plus 7.5 points. Bet your NFL playoffs predictions for FREE this week by scoring a 100% real cash bonus up to $500 when you use promo code PREDICTEM on the special offers page AFTER you register and BEFORE you place your first bet at the web’s oldest (In business since 1983) and most trusted sportsbook —-> Everygame! (Formerly known as Intertops)