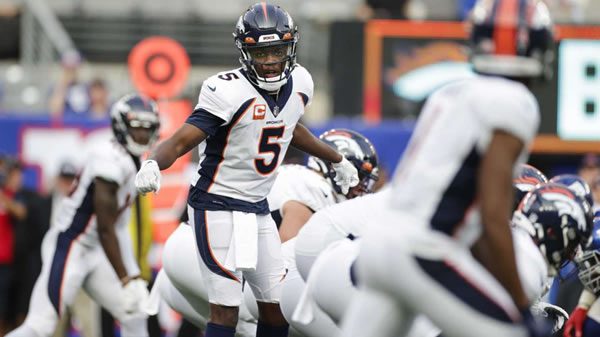 I was extremely confused when the Jets were getting just 4 points in their Week 2 match-up against New England. The Jets’ offense is just a complete mess. The offensive line cannot protect, there is absolutely no threat of a running game, and QB Zach Wilson is still just a rookie at the end of the day. After urging bettors to lay the points with New England last week, the Jets completely imploded in a disastrous 25-6 loss. A lot of casual fans will point to rookie Zach Wilson’s performance as the reason for the lopsided defeat, and there is some justification in that rationale as Wilson forced four interceptions in the Week 2 dud. However, the Jets simply do not have the talent around Wilson to succeed, and that is why we are seeing a more realistic betting line this week with the Jets getting 11 points on the road in Denver.

At 2-0 SU and 2-0 ATS, the Denver Broncos are currently standing atop the AFC West in a tie with the Raiders, who are also still undefeated. However, the jury is still out on this Broncos team. Despite the undefeated record, the Broncos have opened the season with the easiest schedule in the league, thanks to technical layups against the Giants and Jaguars in the opening two games. To be fair, the Broncos did go on the road to capture both of those victories and will return home this Sunday in a more advantageous pairing against the Jets. However, I’m not quite convinced this Broncos team deserves to be double-digit favorites over anyone, and perhaps that leads to a potential betting opportunity in Sunday’s Week 3 pairing against the visiting Jets.

For transparency, I think the Jets are a terrible football team. By rule of thumb, we should not make a habit of placing money on bad football teams. However, I am going to make an exception this week because I think the betting line has overreacted to last week’s loss against the Patriots. Furthermore, I’m not convinced Denver deserves to be double-digit favorites over anyone due to their relatively conservative offense. The Broncos just posted rather mundane scoring totals of 27 and 23 against the subpar defenses of the Giants and Jaguars. Additionally, those point totals were also a product of multiple turnovers coughed up by their opponents in each game.

Now I understand that many are going to point to Wilson’s four interceptions last week as a cause for concern, and I would agree with that sentiment. However, there are very few teams in the NFL that disguise coverages like New England. If we take away another disastrous turnover affair, Wilson has the pure passing ability to keep the Jets’ competitive. Receivers Corey Davis and Braxton Berrios are going to improve as Wilson improves throughout the season. Denver’s main defensive problems were in the secondary last year, and while they made several moves this offseason to address those concerns, there are still concerns. More importantly, Denver’s offense is nothing to fear from a scoring standpoint which is why you see the total listed at just 41 points. Teddy Bridgewater is a game-managing quarterback, and the Broncos will continue to put heavy emphasis on the ground game. Both characteristics provide more value to the underdog here, and as much as I hate to say it; the Jets are the more reliable play in this game!

More Picks: Ravens vs. Lions Pick Versus the Point Spread

Jay’s Pick to Cover the Point Spread: This game is far from a sure thing, but I believe the value here is with the Jets. Take NYJ +11. You can make the Jets a +30 underdog by adding them into a 19 point NFL teaser at BetAnySports! Even better, this bookie offers -105 reduced juice betting! This may not sound like much to you, but it’s HUGE! Betting at -105 odds instead of -110 saves you $5 per hundred your trying to win. This affects small betters the same. You’re literaly risking 5 cents less per dollar you’re trying to win. It adds up to THOUSANDS of dollars over the long haul. PLEASE, for your sake and ours (they pay us and that is what allows us to continue to provide free articles to you) dump your bookie and get with this place! You’ll be so much happier! Click here to start enjoying reduced odds betting today!