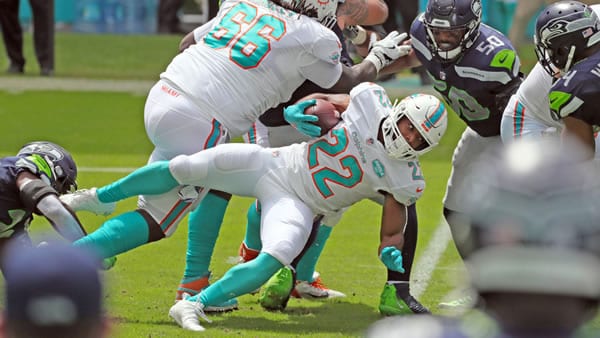 Coming off a huge upset victory last week the Miami Dolphins look to avoid a letdown and reach .500 when they host the hapless Jets for an AFC East divisional bout Sunday afternoon down in South Florida. Miami’s favored by a touchdown-plus for the first time in three seasons. Can the Dolphins cover the big number? Can the Jets show some life? And how are we playing this game with our free NFL pick?

Week 6 NFL betting odds opened the Dolphins at -8.5 for this game, with an over/under of right around 49. Early betting action then dipped that spread to -8 and dropped that total to 47.5.

New York remains one of the last three winless teams in the League this season, after losing at home to Arizona last Sunday 30-10. The Jets, with Joe Flacco at quarterback in place of an injured Sam Darnold, managed just one first down on their first three possessions of the game, trailed 7-0 seven minutes in and 17-3 at the half. New York pulled to within 17-10 late in the third quarter but faded from there, as the Cardinals tacked on the last 13 points of the game.

New York also whiffed against the spread as a seven-point home dog.

The Jets had chances to keep things closer but got stuffed on 4th-and-1 at the Arizona 13-yard line in the second quarter and shortly thereafter settled for a very short field goal out of a 1st-and-goal situation.

Miami, meanwhile, is 2-3 on the season, after drilling the defending NFC champion 49ers in Santa Clara last Sunday 43-17. The Dolphins, playing as eight-point underdogs on the other side of the country, drove their first two possessions of the game 79 and 56 yards to touchdowns and a 14-0 lead. Miami let the 49ers get within 14-7 early in the second quarter, then used a 16-0 run to take a 30-7 lead into halftime and cruised from there.

In the process the Dolphins cashed in on the NFL money line at a price of around +315.

Still, it was the first time this season the Dolphins out-gained an opponent.

Miami opened this season with a 21-11 loss to New England, although that was a one-score game well into the fourth quarter. The Dolphins then gave up a fourth-quarter lead and lost to Buffalo 31-28 but covered as six-point dogs. Miami then won at Jacksonville 31-13, then lost at home to 5-0 Seattle 31-23. So the Dolphins are 3-1 ATS their last four times out.

Miami is 6-2 SU, 6-1-1 ATS over the last eight meetings with the Jets. Last year these teams split their two meetings, the Dolphins winning at home 26-18, then New York winning in New Jersey 22-21.

The Dolphins just pulled off a big upset on the other side of the country, which normally would set them up for a letdown the following week. But it probably won’t come against the Jets, who remain in the running for the worst team in the League. Miami can reach .500 with a victory while New York’s struggling just to stay in games. We like the Dolphins here, minus the points. Note: When you bet on football or basketball, is your bookie charging you -110 odds? (or higher?) Did you know that you could be wagering at only -105? This saves you 50 bucks for every thousand that you wager. That really adds up! Dump your overpriced bookie TODAY and start saving big bucks by betting at -105 odds today at BetAnySports!