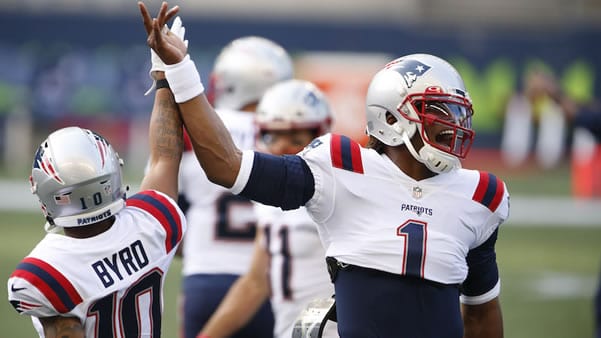 The Denver Broncos head East to Massachusetts to take on the New England Patriots in a Sunday afternoon matchup at Gillette Stadium. The Broncos have the historical upper hand in the series with a record of 30-23 against the Patriots, but that has not been the case of late, with New England having won seven of the last ten matchups, including five straight at home by an average of over 20 points per game.

After suffering through Brian Hoyer costing them a winnable game against the Chiefs, the Patriots are expected to get Cam Newton back at quarterback after he missed time due to COVID. Newton had the worst game of his season last time out and against Oakland and will be looking to get things back on track against a Denver defense that ranks a respectable 14th in scoring and 16th in yards allowed despite missing some key players.

One central area of concern for the Broncos is their defense, which has been ravaged by injuries to start the season. Linebacker Von Miller, cornerback AJ Bouye, and lineman Jurrell Casey make up over $43 million of the Denver salary cap. All are gone for the year, though they are far from alone as they have eleven players now on IR, making up $53.4 million of their cap, which is just over 25% of it. The defense has allowed 82 points over their last three games, including 28 to a clown college Jets team in their previous match out that had scored that many points just three other times in the past 29 games.

If there is any sort of hiccup with Cam Newton’s health, Jarrett Stidham will be relied upon as the teams’ backup now that Hoyer showed he is incapable of playing effectively at the professional level. Against the Chiefs, Stidham threw for the first touchdown of his NFL career and certainly looked light years better than anything Hoyer was able to feebly attempt thru the first three quarters. The second-year quarterback from Auburn did display some happy feet in the pocket, which is something. However, any further experience will help improve on as he gets more acclimated to the professional pace of the game. And while he did throw for two interceptions in the game, one was due to having to force the issue with time running out, and the other was the direct result of yet another Julian Edelman drop.

Julian Edelman will forever go down as a Patriots legend, mostly thanks to his incredible performances in Super Bowl victories against the Seahawks and Falcons. Unfortunately, his later-in-career play is starting to resemble that of the player he essentially replaced in the Patriots lineup, Wes Welker. Concussions were the biggest cause of Welker’s career-ending as it did, and it is starting to look like the slot receiver beating Edelman has received over 154 career games may have finally taken its true toll. His career is certainly not over, but relying on Edelman to be the elite option he once was would not be wise when game planning going forward, especially considering he has now gone eight straight games going back to last season without a touchdown reception.

There were definite promising signs for the Patriots against Kansas City especially considering they had a chance to win and reasonably should have if not for Hoyer shooting themselves in the foot along with egregious errors by the officiating as they did nothing to hide the NFL’s agenda of pushing the Chiefs and protecting Patrick Mahomes like a porcelain doll. Second-year players Damien Harris and N’Keal Harry both looked on their way toward proving why the team used such high picks on them in the first place, and if their play continues as is, could end up being starters for the team for years to come.

The Patriots aren’t the only team dealing with disarray at the quarterback position, as expected starter to begin the season Drew Lock was knocked out of their week two matchup against Pittsburgh in the 1st quarter and, much like Cam Newton, wasn’t expected to go if the teams had originally played when expected. Thankfully for Broncos fans, Luck is probable to go on Sunday, but if he is somehow unavailable to play, the team will again turn to Brett Rypien, who led them to their first win of the year in week four against the hapless Jets, and if called upon would be the 5th different Broncos quarterback to get a start in their last 20 games (Joe Flacco, Brandon Allen, Drew Lock, Jeff Driskell).

Whether it is Lock or Rypien that goes on Sunday, they will both be dealing with the same issue of who they will have available to throw to. Leading wide receiver Courtland Sutton was already lost for the year with a knee injury, and both KJ Hamler and top tight end Noah Fant are questionable at best to play against the Patriots. Thankfully for the Broncos, all hope is not lost, as rookie receiver Jerry Jeudy has already shown why Denver chose him with their first-round pick, and along with Tim Patrick, gives the team at least two quality options at their starting positions. The issue is who else is there, especially if the Broncos were to further fall victim to injuries, with wide receiver Daesean Hamilton and tight end Jake Butt the next up on the depth charts. Butt has only ten receptions since being drafted by the Broncos in 2017 due to the fact that his ACL’s are seemingly made of scotch tape, while Hamilton has just three catches this season and has only caught three touchdowns over 23 career games.

To offset the expected pressure that Bill Belichick and the Patriots are expected to bring against either Lock or Rypien at quarterback, the Broncos were hoping to depend on running back Melvin Gordon. Their biggest offensive free agent signee from the offseason, Gordon, was coming off of the best game of his Denver career. Still, after getting cited for DUI on Tuesday evening, his availability is undoubtedly in question this weekend, with a multiple game suspension on the way. If he is unable to play, the Broncos would likely go with a committee approach of Royce Freeman and Phillip Lindsay.

The expected return of Drew Lock to the Broncos lineup is a definitive boost, but it’s who is not in the lineup that is the major issue facing Denver this weekend. They have already suffered significant losses on defense and to their skill position players thanks to injuries, and now the possible loss of Gordon to an already depleted offense may be too much for them to overcome. That is one major reason why I am going with the Patriots this weekend, and the other is the motivation factor. If there is one thing that New England has done exceedingly well in the Belichick regime is respond well when they feel as though their backs are against the wall or us, especially if they have a ‘us against the world’ mentality. Word out of Foxboro this week was of a team furious with the NFL’s complete mishandling of their COVID situation and the feeling that the league was essentially ignoring player safety by forcing them to play against the Chiefs despite positive tests and then nearly doing the same a week later against Denver. Against a decimated Denver roster and ignited with angry inspiration, I expect New England to take no prisoners on Sunday and get a decided win and cover at home against the Broncos.

Mike’s Pick to Cover the Point Spread: New England -10. Attention small bettors! Deposit $25 and get a FREE $50 bet at Intertops Sportsbook when you sign up through this link and use bonus code ROOKIE200