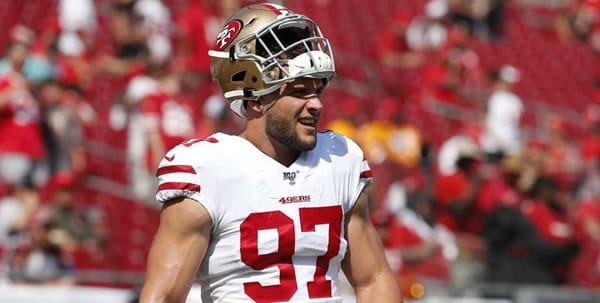 The AFC playoff draw has had some wild upsets leading up to the AFC Championship, but the NFC side has mostly gone the chalk route with the 2-seed Packers headed to San Francisco to take on the 1-seed 49ers for the right to go to the big game. The Niners dropped the Pack by a 37-8 margin in Week 12, but Green Bay hasn’t lost since winning five straight to finish up the regular season and outlasting Seattle in last week’s Divisional Round. San Francisco looked like the best team in the NFC while eliminating Minnesota last week. The 49ers racked up 47 rush attempts and pushed the Vikings around at will with those optics surely informing the opening line that has SF as 7.5-point favorites against Green Bay. Can the Packers 23rd ranked rush defense slow a San Francisco running game that is three deep at running back and ranked 2nd in the league in yards per game?

I have a hard time remembering last week on some occasions, so let’s take a look at some nuggets from the last time these two met. San Francisco shut out Green Bay in the first half and continued the defensive dominance in the second half, holding Aaron Rodgers to 104 passing yards while Aaron Jones was only able to net 38 rushing yards. Jimmy Garoppolo threw for 250 yards and two scores, finding George Kittle for 125 yards and a touchdown while Raheem Mostert and Tevin Coleman each had a rushing score. The San Fran defense rounded out a shutdown effort with five sacks, and it was all the more impressive considering Green Bay was coming off a bye week. The only thing that GB could look to from that game is that Za’Darius Smith was able to notch 1.5 sacks.

Green Bay has done remarkably well in close scenarios this season as nine of fourteen wins saw their opponent have the ball in the fourth quarter with a chance to win or tie. The Packers seemingly willed their way to victory in those contests, but the real key was this team having the 2nd-fewest giveaways while notching the 8th-most takeaways. They somehow managed the 6th-best time of possession mark despite a third-down conversion rate that ranked 23rd in the league, and a defense that was 26th in yards per rush allowed survived as Preston and Za’Darius Smith accounted for 25.5 sacks in the regular season. Aaron Rodgers (26 TD, 4 INT) was able to do just enough even as GB failed to find a consistent secondary target to go alongside Davante Adams. Adams led the team in catches and yards in the regular season despite missing five games, and it was a familiar tune against Seattle with Davante’s 160 receiving yards representing 66% of what Rodgers put up against the Seahawks. There is no such thing as 14 lucky wins, but Green Bay has a seemingly narrow set of options to get things done. If Rodgers underperforms, they are likely going home. The same will be true if Aaron Jones (19 TD in the regular season) is held in check again or if the Niner secondary can take away Adams. A Green Bay upset almost surely includes some big contributions but secondary performers.

San Francisco could have been the best overall team in the playoffs at the start and surely are now that Baltimore has been dispatched. The 49ers are second in points per game on offense with a top-5 conversion percentage on third down and are also top-5 in time of possession. Their defense is 8th in points allowed, second in total yards allowed with the best pass defense in the league. The raw stats alone are impressive, but the manner of accruing them is even more noteworthy. All four defensive linemen have at least 6.5 sacks as part of a team total of 48 while nine different defenders have at least one interception, and five players have a defensive score. Nick Bosa and Richard Sherman standout as big names, but the entire defense has proven capable. The offense features a similarly diverse approach with three running backs able to shoulder the lead role. Raheem Mostert (5.6 YPC) has taken over in the later going and has seen at least ten carries in each of the last six games, but Tevin Coleman is tied for the team lead with eight rushing scores and Matt Breida finished the season north of five yards per carry. All are alive in the passing game, and the trio hit 2,400 scrimmage yards in the regular season with 19 total touchdowns. George Kittle (85/1053/5) gets a lot of media attention, but Emmanuel Sanders has 502 yards, and three scores since coming over from Denver, and Deebo Samuel finished off his rookie season with six total touchdowns. The cupboard has been rather full for Garopollo, and he has done quite a bit with those weapons, hitting on 69% of his throws with 27 touchdowns against 13 interceptions.

In my opinion, the danger stat for Green Bay is their 36% conversion rate on third down, which ranked 23rd. The Packers were rolling against Seattle when they were converting and extending drives, but the Seahawks were able to get back in it when Green Bay regressed to their mean and struggled with some three-and-outs. San Francisco is 2nd in third-down stops, allowing conversions on just 33% of attempts, and they held Green Bay to 1-of-15 on third down in Week 12. That is a huge problem for Green Bay in general, and it will be even more troublesome if the Packers are trailing and have to abandon the run as San Fran can get rush with four and still get pressure while still manning a full coverage secondary. I don’t think this is going to be the blowout that we saw a couple of months ago, but San Francisco is better up and down the roster outside of the Aaron Rodgers/Davante Adams connection. I think Green Bay will keep it close through the half, but the Niners are as classy as their numbers suggest and can leverage their strengths in the run game against the Packers’ weaknesses on defense. Kittle went for 125 yards with one TD in the first meeting, and Green Bay does not have a good cover option for any TE, much less one of the best in the game. It feels like a large number of points to swallow, but I think SF is the right call as they get out with a 28-17 win.

Ted’s Pick to Cover the Point Spread: San Francisco minus the points. This is also a good game to tease down. Did you know that 5Dimes offers teasers all the way up to 20 points? More importantly, they offer -105 odds pricing on all sides and totals! You pay -110 at your book. You only lay -105 odds when you register for an account and start betting at 5Dimes! The better way to bet!