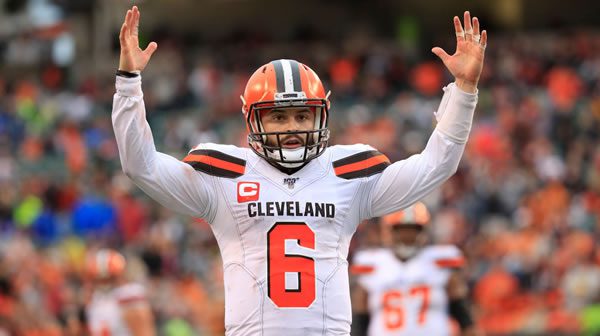 Picking a team to win their division is a safer alternative than betting a team to win the conference or Super Bowl. In this bet, you can focus on just the regular season, which has some advantages. It’s easier to fathom than also trying to forecast the entire postseason. This bet allows you to capitalize off any insight you have on how a team will do without having to hope everything goes smoothly in the playoffs for your observations to stick. The concept of betting value can be a hard one to negotiate. When looking at bets like this, there will likely be two thoughts—who you think will win the division, as well as teams that are getting better odds than they should be. That doesn’t mean the favored team can’t have good value, but as we know, the bigger betting carrots that get dangled are usually with the teams where finding people to bet is more difficult. In this piece, we will go over which teams have the most value to win their division. It might be who we think will win the division from a straight-up perspective, but it can also be the team being offered at the best value to do so. Let’s get started!

Analysis and Pick: The Bills have established themselves as the top dogs in the division, a rising team that missed the Super Bowl by one game last season. And while they would be most reasonable people’s choice to repeat as the division winner, a -140 return is not going to get bettors’ blood pumping, nor should it. The best value might actually be with the team that has won 17 of the last 20 division races—the New England Patriots. At +300, there is more value there, and one figures the Patriots will find some answers sooner than later. A lot of offseason moves and some promising incoming QB talent, combined with some bad breaks for Buffalo, could conceivably have the Pats back in a familiar position. At the very least, it’s a rare time in recent memory where it makes sense from a value standpoint to bet on the Pats in this spot.

Analysis and Pick: It’s really tough to hash through the AFC North. You have a team that has been a solid contender the last few years in Baltimore, a rising squad in the Browns coming off a big year, and a Pittsburgh team that looked like the class of the conference before evaporating late last season. Then there is a rising Bengals team that can’t be discounted, with the young Burrow getting some nice pieces with which to work. I just think out of this bunch, it is Cleveland that has stumbled onto something potentially big. With some incoming talent and injured guys like Odell Beckham returning, I think they set up as the team most likely to make a surge and take down the AFC North at a decent +145 return. BET YOUR NFL FUTURES PICKS FREE BY TAKING ADVANTAGE OF A 100% REAL CASH BONUS ON YOUR FIRST DEPOSIT OF $100 TO $300 AT MYBOOKIE! (YOU MUST USE BONUS/PROMO CODE PREDICT100 TO RECEIVE THE BONUS!)

Analysis and Pick: A division of the haves and have-nots, with the Colts and Titans knotted as -110 choices, while the Jags and Texans lag far behind. It’s one of those divisions where a bet can be justified on at least three teams, as Houston just seems hopeless. I just can’t get away from the fact that it is the Titans who appear to be a click ahead of the rest. After the last few seasons, for them to be getting the same odds as Indy seems a little off-kilter, I think longer odds on the Titans could be justified. I’ll take Tennessee.

Analysis and Pick: This division really tests the notion of value, being that it takes a lot of nerve to pick a team other than the Chiefs. But the rewards are there for potential dissenters. To win $10 on the Chiefs, you have to pony up $25, whereas a $2 bet on the next most-favored team would yield the same payoff. The Chiefs are rightfully favored, but is the gap that far? While all three teams have a lot of ground to cover, the jump in value would seem to warrant it on some levels. Incoming Brandon Staley looks to whip the Chargers’ defense into shape, with a rising offense that could take form in 2021. I think all three teams under the Chiefs could be justified, with the Bolts using their strong finish to last season to hit the ground running in 2021.

Analysis and Pick: Last season was a free-for-all, where winning the NFC East seemed to come down to happenstance and who stunk less late in the season. And while Dallas does have a lot of problems, injuries really set them back, and with some better luck on that front, they might be hard to derail. Being that it might not take a ton to win this division, a healthy Dak Prescott should have the Cowboys at the head of the standings come season’s end. And a +135 return isn’t too shabby for something that really should happen. The only other team where it would seem worth a gamble is maybe Philly, with Washington and the Giants a little too short on potential return.

Analysis and Pick: If Rodgers and the Packers get back on the same page, they’re the obvious pick, but something about that situation makes one hesitant to lay the chalk. Not a ton of value there. I think the best value in this division might lie with the Bears at +375. Improved QB play should resonate throughout the whole team and could have the Bears playing closer to their 2018 form than what we’ve seen the past few seasons. Coach Nagy is on the hot-seat, which could hasten Justin Fields getting on the field should Andy Dalton falter. And that defense is still tough. Worth a whirl.

Analysis and Pick: One of the most simplified equations in the divisional races, this one essentially comes down to whether the Bucs are worth it at -175 or if the Saints can maintain without Drew Brees. The Saints’ record without Brees the last couple of seasons inspires confidence. The Buccaneers are coming off a Super Bowl, and though Brady isn’t still in this for the heck of it, one wonders if the hangover quotient will rear its head. To win $10 on the Bucs, you have to bet $17.50. To win $10 on the Saints, you’d have to bet a little over $3. So do I think the Bucs will win? Sure. Do I think the Saints are almost six times less likely to win the division? No.

Analysis and Pick: On paper, it’s the most competitive division in the NFL, with all choices going at +200 to +500. It’s one of those divisions where the value isn’t bad across the board. But with personnel and coaching shifts in Los Angeles, so many questions in San Fran, maybe the true value lies with the bottom two choices. With sweeping changes made on both sides of the ball, maybe year three of the Kyler Murray/Kliff Kingsbury union can produce some better results at an appetizing +500. They’re not far off, and if some of these changes resonate, it could give them that extra gear they’ve been missing. Bet your NFL futures picks live throughout the season at Bovada Sportsbook! An online sportsbook where credit cards work for depositing, where you’ll receive a 50% bonus up to $250 FREE and where you’ll receive rebates on ALL your bets; win, lose or draw! (Fast payouts too!)