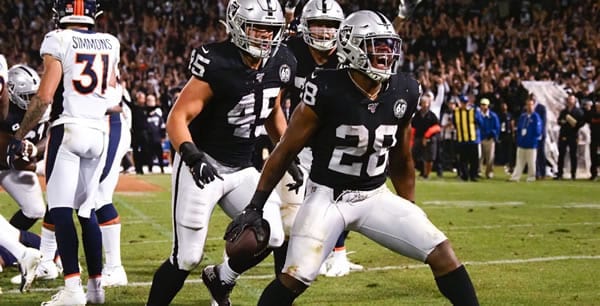 The Oakland Raiders come into NRG Stadium on Sunday for an AFC afternoon showdown with the Houston Texans. With Oakland at 3-3 and Houston at 4-3 and both coming off losses, this is a game both teams need. On Sunday, the Texans lost to the Colts, 30-23, and after back-to-back road games, look forward to returning home this week. The Raiders also lost some momentum last week, falling to the Packers at Lambeau, 42-24. They weren’t very competitive, failing to build on two straight wins, followed by the bye week. Can they come up with better in their second straight road game? Or is this the wrong week to catch the Texans sleeping?

Will the Real Texans Stand Up?

Back at home, this would appear to be a good week to see an excellent performance from Houston. After beating KC on the road, they weren’t able to keep it going last week against the Colts, staying close, but never leading against Indy. They had a lot of penalties, and Deshaun Watson didn’t have his best game, as he threw two picks. They got 100-yard games from DeAndre Hopkins and Kenny Stills, but Will Fuller had to leave the game with a pulled hamstring, and they got the bad news that he will be out indefinitely. And they continue to get dicey results from the run-game, led by Carlos Hyde. Sometimes, it works, and sometimes it doesn’t. Against Oakland at home would appear to be a time where it works, but that’s what the Texans are right now—a dangerous team and even a darkhorse contender in a lot of ways, but not a completely-bankable commodity.

The Wide Range of the Raiders

We’ve seen Oakland all over the place this season. They beat the same Indy team that beat the Texans last week in a big road win a few weeks ago. They followed that up with a surprising win over Chicago in London. But we’ve seen them stall out before this season and against Green Bay on Sunday, it never really came off. Derek Carr was typically accurate on 22-for-28 completions with 293 yards and a pair of TDs, but a pick and a fumble while trying to punch in a TD that led to a Green Bay safety didn’t help the cause. At their best, despite all their issues, they’ve shown that their ceiling is a little higher this season than last.

Say what you will about Derek Carr, but he is pretty efficient and can get this offense moving. A few players emerging have given this side of the ball some hope. Rookie back Joshua Jacobs had another big game on Sunday, running for 124 yards. Whether he can thrive against the robust Houston defensive front is another matter, but he’s emerging as a real threat. With 126 yards and two TDs, tight end Darren Waller continues to shine in this offense. But still, an offense needing star-power still looks for the return of top receiver Tyrell Williams. And that also goes for left tackle Trent Brown. Getting closer to full power would go a long way this week.

Matchup Quirks for Both Teams

With Watson working with a dangerous cast of ball-catchers, that looms as a trouble-spot for a Raiders’ defense that gave up a passing bonanza last week to Green Bay and has generally been pretty soft this season. On Sunday, they gave up 429 yards and five passing TDs to Aaron Rodgers. With Watson and Company capable of major explosions, what answers will Oakland have? And with Oakland now developing a dependency on Jacobs and the ground-game, how will that manifest against a stiff Houston front with JJ Watt, DJ Reader, Whitney Mercillus, Benardrick McKinney, and others who can still bring the heat in the form of the run-stop and pass-rush.

But Oakland is not without hope here. Heavily-reliant on the aerial attack, perhaps Carr and Company can take advantage of a leaky Houston pass-defense. If Jacoby Brissett can throw for 326 yards and four TDs, maybe Carr can put forth a similar performance. It just hasn’t been a very productive part of the Houston team, and Carr could make some noise this week with his cast. Houston was so concerned, and they traded a draft pick early this week to the team they’re playing this week for CB Gareon Conley. That should be a little awkward. Also, Oakland has been pretty adept at stopping the run, which might make the Houston offense a bit reliant on taking to the air. If they can stop Hyde, Duke Johnson, and even Watson, it would be a big help toward covering the number this week.

Houston is going to have to convert more positive-looking drives. Too often, they trot out kicker Ka’imi Fairburn with varying results. That really cost them against Indy. You would think against an Oakland defense that couldn’t stop Rodgers that this would be a good week to do that. But it’s hit and miss with this bunch. And will the Raiders get the most of what they can do on offense, or will they continue to undermine their efforts with miscues? Will they be able to establish more of a pass-rush to put some pressure on the quarterback or let Watson pick apart a not-ready-for-primetime secondary?

I see another Oakland performance where there are flashes of a winning effort, but just without the consistency to make it stick. The Raiders really need this one, but so do the Texans who can’t afford to let Indy pull too far ahead in the AFC South. Oakland might get off to a good start before the most compelling mismatch of this game materializes, and that’s the Houston pass offense against the Oakland pass defense. I see the Houston air-offense picking up steam as the game carries on, with the Texans creating enough late separation to get the win and cover at home.

Loot’s Pick to Cover the Point Spread: I’m betting on the Houston Texans minus 6.5 points.