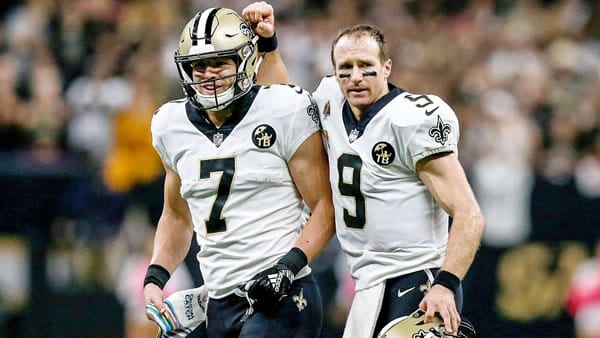 NFC South rivals clash for the first of two times this season when the Saints host the Panthers Sunday afternoon at the Superdome. New Orleans is 3-2 on the season, which comes as little surprise, but the Panthers are 3-3, which comes as a pleasant surprise. The Saints own the upper hand in the recent rivalry with Carolina and they’re favored by a touchdown-plus for this game. How are we playing this one with our free NFL pick?

Week 7 NFL betting odds opened New Orleans as a seven-point favorite over Carolina, with an over/under of 51. Early betting action then added a hook to that spread.

Carolina, in its first season under Coach Rhule, is 3-3, after falling at home to Chicago Sunday 23-16. The Panthers turned the ball over on the opening possession of the game, handing the Bears a short field and a subsequent touchdown. Carolina trailed 13-6 at the half, then allowed the first seven points of the second half. The Panthers got back within one score and got the ball back with a minute and a half to go but QB Teddy Bridgewater threw his second interception of the day on the first play, and Carolina was done.

The Panthers lost outright as two-point favorites and the game played under a total of 45.

On the day Carolina actually out-gained Chicago 303-261 and out-rushed the Bears 112-63. So the Panthers have out-gained five of their six opponents this season and out-rushed two of their last three foes. But Carolina lost the turnover battle last week 3-1, resulting in a -4 points differential, twice settled for very short field goals from 1st-and-goal situations and came up empty on a big 4th-and-2 from the Chicago 38 with two minutes left.

New Orleans, meanwhile, is 3-2, after coming from behind to beat the Chargers two Monday’s ago 30-27 in overtime. The Saints then enjoyed last week off.

New Orleans spotted the Chargers the first six points of the game and trailed 20-3 just before halftime. The Saints scored a key touchdown just before the half, then scored the first 10 points out of the locker to forge a 20-20 tie. New Orleans then fell behind 27-20 with four minutes to go, re-tied it at 27-27 with a minute left, then survived a Chargers game-winning field goal attempt at the buzzer that hit the upright. The Saints then drove the opening possession of OT to a field goal, then made a defensive stop to secure the victory.

However, New Orleans couldn’t cover as a seven-point favorite.

On the night the Saints out-gained the Chargers 408-350. So New Orleans has out-gained each of its last four opponents.

The Saints opened this season with a 34-23 win over Tampa, then lost back-to-back games to the Raiders and Green Bay. Two subsequent wins puts New Orleans at 3-2 overall, a half-game behind the first-place Bucs in the NFC South.

On the injury front Carolina is still playing without RB Christian McCaffrey, although it’s 3-1 both SU and ATS since he went down. Meanwhile, Saints WR Michael Thomas has missed the last four games and is listed as questionable for this one.

New Orleans is 6-1 SU but only 3-4 ATS over the last seven meetings with Carolina, as the Panthers have kept most recent games close as underdogs. Last season the Saints swept two games from Carolina by scores of 34-31 and 42-10.That Panthers covered that first game as 10-point dogs but New Orleans covered the second game as a 13-point favorite.

Also, both those games played over their totals, at 45 and 46.

The Saints are not quite the team that played 26-6 SU, 21-11 ATS in 2018-19. They got lucky to beat the Chargers a couple Mondays ago and got out-played by the Raiders and Packers before that. The Panthers, meanwhile, despite what happened last week, are responding well to their new head coach. Carolina’s been in every game this season, playing well even without McCaffrey, and we expect them to keep this one close, too. We’ll take the Panthers and the points. Are you a small bettor that wants a big bonus? We’ve got a good one for ya! Deposit $25 and get a free $50 bet at Intertops Sportsbook!