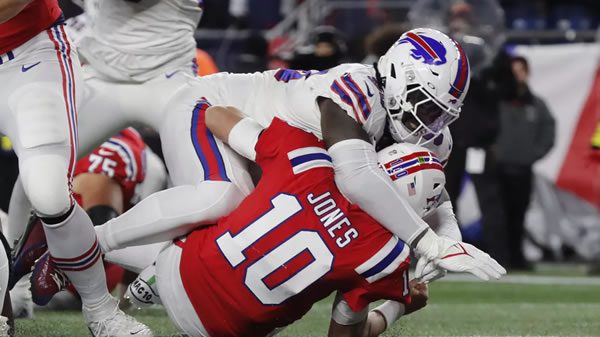 The Buffalo Bills welcome the New England Patriots to Western New York for a week 18 AFC East battle. This will be a challenging afternoon in Buffalo as the Bills continue their emotional roller coaster around the well-being of injured Safety Damar Hamlin.
The game has playoff implications, as the Patriots will get into the tournament if they can upset the Bills, while the Bills can get the No. 1 seed if they win and the Chiefs lose to the Raiders. BOVADA.LV has made Buffalo 8.5 point favorites and set the Over/Under at 43. The play is to lay the points and back the Bills to come out and dominate their division rivals. Here is the handicap.

Buffalo Can Overcome The Adversity

It would be impossible to overstate the devastation the Bills have gone through this week, as they have watched their teammate fight for his life after the in-game injury on Monday Night. The practice schedule was already altered because it was a short week, and it was no doubt thrown into chaos as the team deals with the issues of their teammate. It’s hard to imagine that all of the players have been able to be 100% focused during practices and the rollout of the game plan. If this were a bad team or a poorly coached team, we would expect them to come out and get steam-rolled, and no one would blame them. But Buffalo has been laser-focused on getting to and winning a Super Bowl since Patrick Mahomes stunned them in the last 13 seconds last year in Arrowhead. Sean McDermott has had his squad gearing up for the playoffs this year since training camp opened in late July.

I look for Buffalo to come together as a team and rally to throttle the Patriots and cover the spread. We all know the Bills Mafia will be all-in backing their Bills, and the stadium will be electric. If this game was on the road, it might be more difficult for the Bills to maintain their focus for the full 60 minutes, but in Orchard Park, the fans will keep their attention on the task at hand. Also, it will help them that this is week 18, and they are playing a familiar foe. Buffalo is one of the most disciplined teams in the league and has been practicing together for five months, so they should be able to execute the playbook with minimal practice this week. Since they are familiar with the Patriots’ personnel and scheme, they won’t have to learn what their opponent is going to do. There aren’t a lot of teams that I think could get focused to play this game, but I think the Bills in Week 18 rise to the occasion.

Buffalo Is The Far Superior Team

These teams met in Foxboro in week 13 in a game that the Bills controlled from the opening kick-off to the final buzzer. Buffalo won the game by two touchdowns as a 4-point road favorite, but the game really wasn’t as close as the score sounds. The Bills outgained the Pats 355-242, with 48 of the Patriots’ yards coming on their only scoring play early in the game. Buffalo held the ball for 38 minutes and converted 60% of their 3rd downs compared to 25% for New England. Since that game, the Bills are 3-0 while the Patriots have won only 2 out of 4, but that includes the win last week against the Dolphins when they were gifted a pick six while trailing and a win against the Cardinals in the game Kyler Murray got injured in.

The Patriot defense is not fast enough to deal with the Bill attack. Josh Allen only ran for 20 yards in Week 13 but will be much more willing to run this week. The Pats have been roasted by other mobile quarterbacks this year, and their linebackers can’t keep up with Allen. On the offensive side of the ball, New England’s attack and Mac Jones look worse every week. In the last three weeks, they have only averaged 280 yards of offense and failed to reach 200 passing yards in 2 of those weeks. Their running game was strong early in the year but averaged only 69 yards in each of the last two games. The Patriots’ coaching has kept them competitive in some games, but their players will have to do that this week, and I don’t think they have the talent.More Picks: Get Keith Allen’s NYG/Phi Week 18 betting analysis and recommended bets >>>

There Is Line Value With The Bills

As stated above, Buffalo was a 4-point favorite in Foxboro 5 weeks ago. Since then, the Bills have played at the same level while the Pats have struggled. With home-field flipping, the Bills should be closer to a 10-point favorite and would be if it weren’t for the Hamlin situation. The Books and other bettors are betting that the Bills will not respond to the situation and are shaving the line by a couple of points. The Patriots are only winning and staying close in games where their opponents are giving them defensive or special team touchdowns. Look for the Bills to take care of the ball and New England not to be able to generate points with long scoring drives.

Lay The Points And Join The Bills Mafia

There will be no better week to join the Bills Mafia and back the Buffalo Bills to come together as a team and play the game of the season, dedicated to their teammate Damar Hamlin. Play Buffalo -8.5. Bet your Week Eighteen NFL football predictions for FREE by scoring a 100% real cash bonus up to $300 when you use bonus code PREDICT100 at MyBookie Sportsbook!