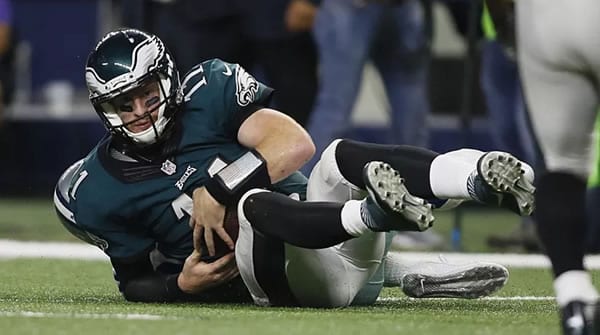 Playoff hopefuls clash when the Eagles battle the Browns in an interesting inter-conference match-up Sunday afternoon in Cleveland. Philadelphia, despite a sub-.500 record, leads the NFC East, while the Browns are part of a six-team scrum for wild-card berths in the AFC. The Brownies are only favored by the standard home-field advantage for this game; who do we like for our free NFL pick?

Week 11 NFL betting odds opened Cleveland as a two-point favorite over Philadelphia, with an over/under of right around 46. Early betting action then bumped the Browns to -3 and dipped that total to 45.5.

Philadelphia continues to muddle its way through this season after losing to the rival Giants last week 27-17. The Eagles allowed offensively-challenged New York to drive its first two possessions of the game 85 and 75 yards to touchdowns and trailed 14-3 at the half. Philly pulled to within 14-11 early in the third quarter and only trailed 21-17 into the fourth but came up empty from there to lose outright as a five-point favorite.

Philadelphia has now been out-gained and out-rushed in four of its last six games.

The Eagles started 1-4-1 this season, then it looked like they might have something going with back-to-back wins over the Giants and Dallas. But now, once again, we can’t figure out what the hell these guys are up to or if they’ve got any betting value.

And still, at 3-5-1 overall, Philadelphia leads the pathetic NFC East by one game over the second-place Giants.

Meanwhile, Cleveland is 2-2 SU, 0-4 ATS over its last four games, following an underwhelming 10-7 victory over Houston last week. On a blustery day in C-Town, the Browns drove the opening possession of the game 52 yards to a field goal, added a Nick Chubb touchdown early in the fourth quarter, and held on from there for the W. However, they missed out on the cover as 4.5-point favorites when Chubb unselfishly ran out of bounds at the Texans’ 1-yard line in the final minute, rather than scoring.

The Browns have now out-gained only three of their nine opponents this season, but they’ve also out-rushed seven of their nine foes. And Cleveland is 6-1 when it wins the ground battle.

Three games ago, the Browns lost WR Odell Beckham for the season to a knee injury in the first quarter against Cincinnati. The Browns went on to win that game 37-34, but since then, they’ve scored a total of 16 points.

At 6-3 overall, Cleveland trails division-leading Pittsburgh by three games in the AFC North, but it also trails Miami by just a tie-breaker in the battle for the second AFC wild-card spot.

These teams last met four seasons ago, a 29-10 Eagles victory.

Unders are 5-4 in Eagles games this season, which is averaging 48 total points against an average over/under of 45.

Overs are 5-4 in Browns games this season, which are averaging 51 points against an average O/U of 48.

Cleveland owns the better running game and the better run defense, and by our accounting, teams that win the ground battle in the NFL cover the spread about 65 percent of the time. So we’re betting the Browns, minus the points. Bet your Week 11 NFL picks for FREE by taking advantage of a 100% real cash bonus on your first deposit of $100 to $300 at MyBookie Sportsbook! Must use bonus code PREDICT100.