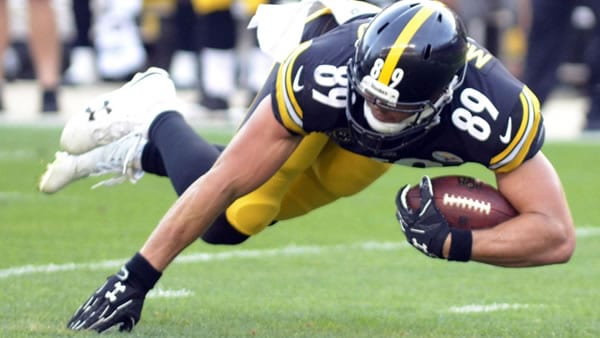 Point spread: Steelers -7 (BAS - 5Dimes has left the US market but you can bet on games at reduced odds -105 here! Same betting platform!)

It’s a battle between division leaders when the Steelers and Eagles meet for the latest edition of the Keystone State NFL rivalry Sunday afternoon at Heinz Field. At 3-0 on the season, Pittsburgh deserves its first-place perch in the AFC North; Philadelphia, on the other hand, at 1-2-1 in the NFC East, does not. Can the Steelers cover a touchdown? Can the Eagles pull an upset? And who do we like here for our free NFL pick?

Week 5’s NFL betting odds opened Pittsburgh as a seven-point favorite for this game, with an over/under of 47.5. Early betting action then shot that total down three full points, to 44.5.

Philadelphia just picked up its first victory of the season last Sunday, upsetting the 49ers out in Santa Clara 25-20. Philly, playing as a nine-point underdog, hit the scoreboard first on a Carson Wentz touchdown run late in the first quarter, then converted a two-point conversion for an 8-0 lead. The Eagles took an 8-7 advantage into the half, then fell behind 14-8 early in the third quarter. But Philadelphia scored the next 17 points of the game to go up 25-14, aided by a huge pick-six with five minutes left and hung on from there for the W.

The Eagles opened their season with a 27-17 loss to Washington, then fell at home to the Rams 37-19, then tied Cincinnati 23-23. But amazingly, at 1-2-1 overall, Philadelphia now leads the pathetic NFC East by a half-game over both the Redskins and Dallas.

Meanwhile, Pittsburgh just enjoyed an unexpected week off after its game at Tennessee scheduled for last Sunday got postponed. So the Steelers should be well-rested for this Sunday.

Pittsburgh opened its season with a 26-16 win over the Giants, covering as a six-point road favorite. The Steelers then held off Denver 26-21 but couldn’t quite cover again at -6. Pittsburgh then came from behind to beat Houston two weeks ago 28-21, covering at -3.5.

At 3-0 overall, Pittsburgh leads the AFC North by a half-game over Baltimore and Cleveland.

These in-state rivals, who first met back in 1933, last met four seasons ago, a somewhat shocking 34-3 Eagles romp in Philly. The Steelers were favored by 3.5 points that day, but Philadelphia dominated as a fired-up home dog.

Pittsburgh has out-gained and out-rushed each of its three opponents this season. The Steelers are averaging 140 yards per game on the ground, while the defense is allowing just 290 total YPG. Plus, Big Ben is back and looks good. Meanwhile, Philadelphia just pulled a nice road upset, but in the NFL, what’s up one week is often down the next, and our guess is that’s the Eagles’ fate for this week. We’re giving the points here with Pittsburgh. Bet your Week 5 NFL picks for FREE by taking advantage of a 100% REAL CASH bonus on your first deposit of $100 to $300 at MyBookie!