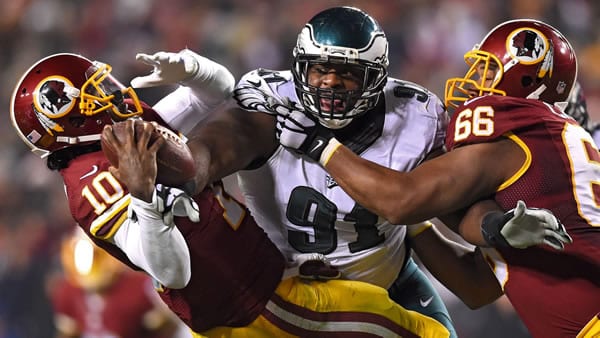 The team formerly known as the Redskins, is now the Washington Football Team is looking to forget 2019 as much as their now-defunct moniker. Washington finished 3-13 SU overall, finishing in the basement of what was classed as one of the weaker divisions in the NFL, the NFC East. Washington closed out their season with an abysmal four-game losing streak where they failed to cover the spread in their last three outings.

The Eagles finished 9-7 SU in the 2019 regular season usurping the Dallas Cowboys for the NFC East crown. The Cowboys were expected to be the team of the East, but Philadelphia found a way to find its way back to the post-season. The Birds rattled off three straight both against the spread and straight-up before exiting in a sloppy 17-9 loss to the Seattle Seahawks in the Divisional Round. Philly incidentally closed as a one-point favorite against the 12’s before Seattle ousted them from the post-season.

How the Public is Betting the Philadelphia-Washington Game

There are several trends that will undoubtedly entice action on Philly in this spot; I will cover those below. As a result, 72% of the consensus, like Philadelphia, must be described as an underdog-conducive number. The Eagles are laying less than a converted touchdown, which again sells a lot of appeal here given Philly won the last meeting between both sides by a margin of 10 points when the two rivals last met in December.

Philadelphia and Washington last met in December of 2019, where the Eagles defeated Washington 37-27. Though the margin of victory looks comfortable from a box score perspective, Philadelphia had to work for the win. It was only in the fourth quarter that the Eagles managed to pull away as Washington had held the lead late until Philly scored the go-ahead touchdown and generated the cover on a game-ending scoop-and-score.

The Birds have now won six straight against Washington. Over this span, the Eagles have been equally kind to backers as they have gone 5-1 ATS. Both of these narratives sell the Philly stock hard. In addition, the Favorite has also gone 6-1 ATS in the preceding seven contests, which once again reinforces the appeal of Philadelphia in this spot.

Eagles standout wide receiver Alshon Jeffery will be unavailable for this divisional contest as he nurses a foot injury that has placed him on the Injury Reserve.

If one looks back at the Philadelphia-Washington series in 2019 from a betting perspective, both games could be characterized as bad beats. In Round One, Philadelphia was spotting double-digit points to Washington before they snuck through the backdoor and covered with a late touchdown in the final minute of play. There were plenty of ripped tickets on the many that backed the Eagles in that 32-27 win for Philly. The same kind of freak occurrence happened in December as Washington takers ripped their tickets on the game’s last play to push them out of the cover zone. I don’t think either one of those two scenarios will unfold in this affair, but I think Philadelphia is supremely overvalued. Philly is priced lower than it was in either of the two games of 2019 (-10.5 and -7, respectively), and Washington only ended up winning three games last year while Philly overachieved and won the NFC East. Plus, the number that is Philly is laying in particular (-6) speaks volumes as it suggests that the market is not even comfortable giving Washington a converted touchdown here. This signals to me that Washington is primed to be a live dog.

I expect Washington to show up and offer a lot of resistance to Philadelphia. You know what they say, with a new season, comes new hopes, and it is only Week One. There isn’t a tremendous amount of optimism surrounding the Washington football team this year, but that can all change with a statement victory against a divisional foe that has seemingly bullied them as of late. No matter how this game goes, it will be a nip-and-tuck affair with the feel of being settled on a field goal. Take the points. Also take some free loot! Deposit $100 get $100 free! Deposit $200 get $200 free! Deposit $300 get $300 free! Grab any one of these red hot offers a MyBookie Sportsbook!