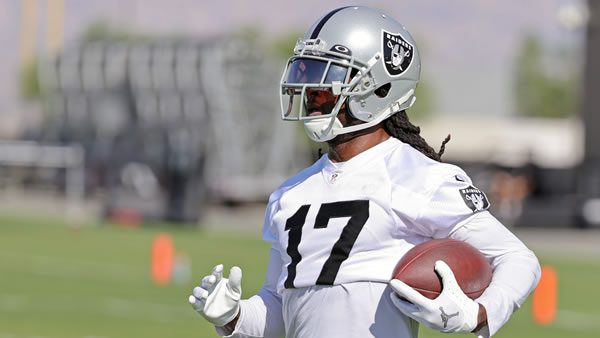 The Las Vegas Raiders come to Inglewood on Sunday to take on the Los Angeles Chargers in an AFC West week one showdown. These division rivals split their two games last season, and a lot has changed since. Both teams have taken strides to upgrade their status, namely the Raiders, who shook up the NFL landscape with the acquisition of Davante Adams, who reunites with old Fresno teammate Derek Carr. Meanwhile, Justin Herbert enters his third season, a time when we generally see young QBs take that next step. Which team can get their season off to a good start when these two squads tangle at SoFi on Sunday?

Already, with some good stuff in place, the Raiders look to give their offense a new dimension with Adams. They already have a good tight end in Darren Waller (probable), a dependable receiver in Hunter Renfrow, a reliable back in Joshua Jacobs, and of course, Carr. The addition of Adams gives them a more dynamic presence in their receiving corps. Lower-key additions like Keelan Cole and rookie RB Zamir White could also give this unit a little boost. Getting Adams, however, is the game-changer. It takes a unit that was more a competent type of offense and makes them more dangerous. And in this division, with some of the offenses they’re tangling with, they could use the extra little pop.

The stacked Chargers were a little quieter in the offseason, though they did acquire Khalil Mack, which could help. Right now, they’re just plugging in the gaps with all the pillars of strength they’ve already established on this team. On offense, the core is solid with Herbert, Austin Ekeler, two top receivers in Keenan Allen and Mike Williams, and a cast of contributors that is really coming around the last few seasons. The defense is littered with stars, as Mack now joins a group that features Joey Bosa, Derwin James, and a group of youngsters who have already started showing their teeth. They add JC Jackson as they look the strengthen their secondary, and some good health could make this one of the better units in the conference.

Who Shined Last Season in This Matchup?

We have a fairly-nice background of data with these two teams with their two games a year. And without getting too hung up on the past, we have seen certain players thrive in this matchup on a consistent basis. For the Bolts, Herbert has fared well in his matchups with the Raiders, getting good performances from Austin Ekeler and Mike Williams. Carr, meanwhile, hasn’t been so bad himself, developing a nice rhythm with Renfrow and Waller. We’ll see how the addition of Adams throws a new light on things, but the total suggests one of the more higher-scoring games of the week where a lot of different people from both offenses should eat.

Edges for the Chargers

In the interests of fairness, these things might not surface in a one-game window, but the Chargers have a few team advantages that should help, particularly as they are at home. And maybe with continued success, their home games can stop seeming like road games. In any event, while the Raiders have made gains on defense, the Chargers have more horses across all phases. Their secondary is developing into a real monster, and up-front, they can really bring the heat on opposing quarterbacks. All around, they’re a little better in the trenches. The Adams addition throws the equation on the other side of the ball into a different category, but with a more-promising QB, a better RB, and two top receivers, the Chargers match up pretty well.

What Can’t Be Calibrated

With the Raiders, maybe a different lens should be used. They’ve overcome an awful lot. For them to even do what they did last season with all the Gruden drama, the deal with Henry Ruggs, III., the injuries, and the wastefulness stemming from several years of squandering high draft picks, was quite impressive. Normally, that status report would result in abject failure, and we didn’t see that at all. Now, as the Raiders shake off a terrible season, they enter this period with a new resolve, the knowledge that they can overcome the things that would topple a lot of other teams. It’s just food for thought, as similar teams can really take off once they remove the shackles.

For the Raiders, it seems like there are more legitimate inquiries. Adams, off a nice run where he had great chemistry with Aaron Rodgers, now reunites with his old friend Carr, but how sure can we be that his excellence will translate seamlessly with a new team? Josh McDaniel moves into town, and we’ll see how fast the offense picks up his new system. We’ve seen it work well, and we also saw it hit a wall with McDaniel before, but one would figure he smoothed out a lot of rough spots after a prolonged run in Belichick’s system. Will the additions of guys like Chandler Jones give the Raiders more completeness up-front and add to the pass-rush they’ve been trying to improve? Can the Raiders’ offensive line hold up to guys like Bosa and Mack, or is this a sore spot on the team that will hold them back this week and beyond?

I like the Chargers this week at home. Granted, the acquisition of Adams could really pay off, and even if Davante doesn’t go nuts this week, he could open things up for Waller and Renfrow, two guys who have done damage in this matchup previously. However, I see a fresh-legged Ekeler doing his share of damage aerially and on the ground, with guys like Mike Williams and Keenan Allen making some big plays downfield. I see the Chargers’ defense as being the more-likely unit to cause a true level of disruption this week. That looms as potentially being the difference, with the Chargers getting out of week one with the win and cover at home.

Loot’s Prediction to Cover the Point Spread: I’m betting on the Los Angeles Chargers minus 3.5 points. Bet your Week 1 NFL picks for FREE by scoring a 100% real cash bonus up to $300 when you use bonus code PREDICT100 at MyBookie Sportsbook! They’re also offering some KILLER football handicapping contests with HUGE prizes!