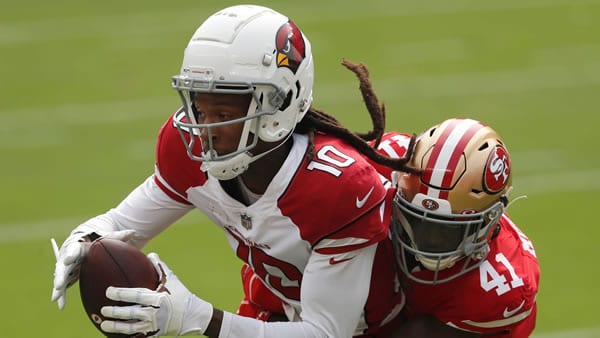 The San Francisco 49ers take on the Arizona Cardinals on Saturday in NFC West action from State Farm Stadium. The Cardinals have gotten back on the right track, with their 33-26 win over the Eagles on Sunday being their second straight win, as they try to right the ship after a late-season slump. They now take on a San Francisco team that has fallen on hard times, their 41-33 loss to Dallas being their third loss in a row and their sixth in their last seven. Can the defending conference champions give the Cardinals a sweat, or will Arizona win handily and cover the spread? Let’s break it down!

It’s hard to remember a prominent team befallen by such misfortune as the 49ers. The injuries are an old story but suffice to say, there has been no let-up for the injury-bug, and its effects have been devastating. It’s not often you can say a team that went to the Super Bowl the previous season has over-achieved in a season where they are 5-9. But they actually hung in there longer than many teams would have under similar conditions. But with just one cover since October 25, the resistance is waning.

As if all their injuries weren’t enough, covid restrictions have now made it, so the last time they were in their home stadium was on November 5 against Green Bay. This will be their sixth game away from their home stadium. With State Farm Stadium becoming a temporary home away from home, being here probably helps, as they have been in Glendale two of their last three games. It’s just another layer of difficulty for a team that has been forced to endure more than their fair share of it. And over the course of the last month, it has really begun to show.

San Francisco still has some individual players who can do damage on both sides of the ball. But they’ve been robbed of what truly makes them effective. One of those things is depth, as the proven producers still in the fold are few and far between. Quarterback play has become a problem. With Nick Mullens’ turnovers on Sunday, a key part of the losing recipe. They are just a shadow of what they once were, and it’s not really even their fault. No team can hope to be a reasonable representation of what they were with most of their major contributors sidelined.

Luckily, for a team that was in a funk that threatened to derail what looked to be a promising season, their schedule allowed for some growth. Arizona got served two NFC East teams and now a spiraling San Fran team. In week one, the Cardinals put a 24-20 win on the 49ers, but so much has happened since that it might not even matter. The Cardinals won’t be facing the same level of resistance that they faced in week one. And playing these types of teams allows the Cardinals to come around to speed.

Good Signs from the Cardinals

As a whole, the Cardinals’ defense has been up-and-down as of late. And allowing a fruitful day to Jalen Hurts and the Eagles and just winning narrowly was a bit distressing, with turnovers almost ruining the entire team effort. But we have seen a pressuring Cardinals’ defense really start to find its bearings in the last few weeks. In their last two games, the Cardinals have 14 quarterback sacks. Haason Reddick alone has six in the last two weeks. Against the 49ers this week, that type of disruption would certainly go a long way, whether it’s Mullens back there for the Niners or more likely CJ Beathard.

The Cardinals need their offensive stars to shine more consistently. Kyler Murray is a big part of this team coming this far in such a short time, but turnovers have dogged him in recent weeks, as has inconsistent play. But 406 yards through the air on Sunday was big, as he connected well with most of his targets. Getting more big days out of DeAndre Hopkins lately has been big, and he had nine catches for 169 yards and a TD on Sunday. When Murray and Hopkins are clicking, the Cardinals’ offense can be hard to stop.

At times this season and especially in the last few weeks, we see the Cardinals able to overcome. Sometimes things aren’t going their way, and they’ve found a way to make it work. Time and again, they do what they need to do late to stay on top. Anyone who has bet them the last few weeks has seen them first stifle any attempts at a Giants’ comeback a few weeks ago, before stifling some late drives from an Eagles’ team whose offense has found some new wind with Jalen Hurts. And that type of late-game mettle goes a long way when you’re betting on a team.

Whether or not there’s something just off about Arizona might not even matter in this context. And if the Cardinals were to revert to peak form, why not here? The 49ers have to at least subconsciously be wanting this season to end on some level, while Arizona is still hopeful for the future. I just don’t see the 49ers having the same success they had last week against the Dallas defense. The Cardinals’ defense could control this game in stretches while Murray and Company pounce on a SF defense that gave it a good shot this season but has maybe hit a wall. I’ll take the Cardinals.

Loot’s Prediction to Cover the Point Spread: I’m betting on the Arizona Cardinals minus 3.5 points. Did you know you could make the Cards +16.5 by adding them into a massive 20 point football teaser offered at BetAnySports?