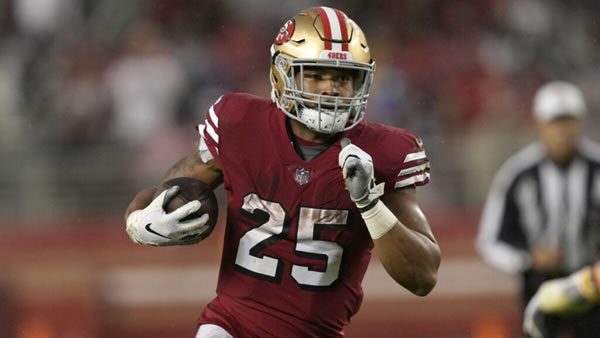 The San Francisco 49ers battle the Los Angeles Rams in a high-stakes NFC West battle on Sunday at SoFi Stadium. The Rams took care of business on Sunday, narrowly defeating Baltimore, 20-19. They were able to move to 12-4 on the season. It was their fifth win in a row, as they are getting into postseason form. The Niners also won last week, mauling the Texans, 23-7, to give themselves a chance to reach the playoffs. Who can get the upper hand in this divisional battle in Inglewood?

What is at Stake Playoffs-Wise?

The Rams are already in, with San Fran still needing some things to happen. A win here would do the trick and get the Niners in on the wild-card. A loss by the Saints would also result in the Niners getting to the playoffs. For the Rams, the situation is a little murkier yet clear-cut in the sense that they’re in with 12 wins, looking to maybe win the division with a win this week or a Cardinals loss to Seattle on Sunday. The top seed in the conference, however, is not on the table.

What Week 10 Tells Us

In the interests of full disclosure, the Rams were at a funky part of the season when they were beaten in Santa Clara by the Niners, 31-10. In the midst of a three-game slide, it was the period that came right before this latest surge of five straight wins. However, in that game, we saw Matthew Stafford and Company hit low depths. Two picks, including a pick-six, no run-game, and a lack of defensive support was key, and I’m not sure it was a total fluke, either. The fact is that the Rams are prone to putting forth the occasional clunker, and the Niners might be adept at bringing that about, especially considering the urgency they face this week.

The Niners saw a lot of things come together against the Rams that week. Deebo Samuel scored a TD on the ground and through the air, George Kittle caught a TD pass, and Eli Mitchell ran for 91 yards. Nick Bosa had a sack and was getting after Stafford all night, while Jonathan Ward recorded the two big picks. A few things put that in a different light this week, namely how the Rams have snapped back into better form for the most part. And with Garoppolo nursing a fractured thumb, the early-week consensus seems to indicate he will play, but we still don’t know for sure or if he will be compromised with the thumb.

For the Rams, the urgency of winning this game is a bit subdued from what is on the table for the 49ers. Sure, a win and a division win would conceivably give them a more-advantageous playoff position, but that doesn’t resonate as clear as what the 49ers have on the table. And for a team that has endured untold bad fortune this season as the 49ers have, being in a win-and-in position should strike anyone as a dangerous spot to bet against. But for the Rams, I’m not so sure we don’t see home pointed urgency here, as they look to lock in a home spot against a team that had to scrape its way into the postseason. They want to come into the playoffs with some pep and atone for a massive loss to their divisional opponent.

The Range of the Rams

Perhaps it misses the spirit of the point to go out of one’s way to pick apart the Rams, as they are 12-4 and on a streak of five straight wins, But the calamity against San Fran wasn’t the only time they’ve been subdued this season. Last week, they pulled out a one-point win late against a Ravens team that had been on the slide. A lot of recent games have been grinds. Still, other than that bizarre 3-week patch and an earlier-season loss to the Cardinals that they later avenged, it’s been all wins for the Rams. It might not be the aerial free-for-all every week, with Cooper Kupp going wild, with other dangerous receivers busting loose, but they can find other ways to win, such as grinding it out and finding a way to pull it out at the end. While their versatility is commendable, those betting on them are often left wanting as they have laid points.

Question Marks for the 49ers

Theoretically, the 49ers have the offensive weaponry to make this work. There is an identity shift that occurs within the offense without Garoppolo that might not work well this week. They need a close-to-well Jimmy G. to commandeer this offense, with the run-game doing its thing, as he efficiently gets the ball in the hands of his playmakers, who are among the tops in the league in yards after catch. Should he at least be able to sling it around in close quarters with some effectiveness, with Eli Mitchell having another good game against this Rams’ front, maybe they can get it done. Still, a San Francisco defense that has continued to see pieces drop all season will have to deter Matthew Stafford and a deep cast of difference-makers with less than what they had the first time around.

Whether or not they’re successful, one can expect a peak effort from the 49ers this week, as simply getting to this spot was a herculean task. A Rams team getting into playoff gear could be a tough task, and an LA offensive free-for-all is something that is on the table. I just see a back-and-forth game where neither team gets away from the other, and something within tells me the Niners will find a way to gut this out or come really close trying. I’ll take the 49ers and the points.

Loot’s Prediction to Cover the Point Spread: I’m betting on the San Francisco 49ers plus 4.5 points. Be sure to check out our college football National Championship game preview and pick!