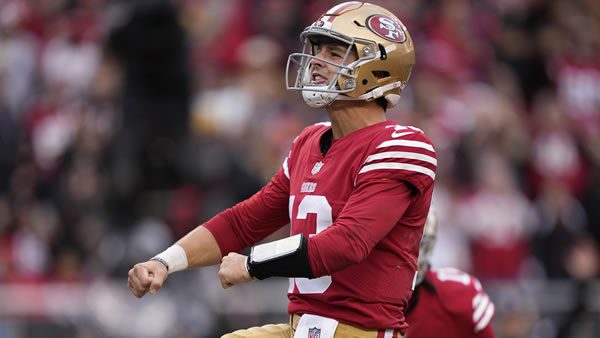 Kyle Shanahan brings his NFC West Champion 49ers to Las Vegas for a New Year’s day battle with Josh McDaniels and the Raiders. San Fran is red hot while the Raiders have been spinning their wheels all year, prompting BOVADA.LV to make the Niners 6-point road favorites and set the game total at 45. The play is to lay the points and ride with San Francisco. Here is the handicap.

Brock Purdy Will Continue To Shine

Purdy will start his 4th game since taking over for the injured Jimmy Garoppolo. We keep waiting for the clock to strike midnight for Purdy, but he continues to look like he belongs, leading his club to an average winning margin of 17 points and easily covering all 3 of his starts. Purdy is completing 67% of his passes for over 8 yards per attempt, and the Niners are averaging over 30 points in his starts. Shanahan has leaned into the running game just a little more than usual as Purdy gets up to game speed, riding Christian McCaffrey to 273 yards over the last three games. With Deebo Samuel recovering from a high ankle sprain, Purdy has been peppering TE George Kittle with targets. Kittle has pulled in 14 of 18 targets over the last three games and converted them into 241 yards and four touchdowns. The San Francisco offense has looked better in the last three weeks than during any other stretch this year. The first 2 of Purdy’s starts came against weak defenses – the Seahawks and the overrated Buccaneers. Everyone thought last week against a stout Commander D – especially the front 7 – Purdy might have turned into a pumpkin, but it didn’t happen. This week’s defensive foe will be the easiest of Purdy’s short tenure.

The Raider defense has underachieved for most of the year. They are 24th in the league allowing 23 points per game, and 21st in opponent’s yards per play. They have looked a little better the last three weeks against bad Ram, Patriot, and Steeler offenses but suffered two devastating injuries in Pittsburgh last week. Edge rusher Chandler Jones had been playing better over the last month but was lost for the year with an elbow injury while leading tackler linebacker Denzel Perryman injured his shoulder and is unlikely to suit up this week. Maxx Crosby is playing at a Pro-Bowl level with 11.5 sacks but will mostly line up across from Trent Williams on Sunday, so don’t expect to hear Crosby’s name very often. The Raider defense is equally bad against both the run and the pass, so look for the Niner attack to have a lot of success. There is no reason to believe the 49ers will score anything less than 24 points this week and probably top 30.

While Shanahan’s offense is getting noticed, it is the defense that is dominating games. Since getting roasted by the Chiefs in week 7, the SF stop unit has tightened the screws. The Commanders scored a garbage time touchdown last week to get to 20 points, which was the first time SF’s defense has allowed 20 since week 7. Since the Niners’ Week 9 bye, the defense has taken the ball away 15 times from opposing offenses and now ranks 2nd in the league in takeaways. They have allowed the fewest points and first downs in the league and are equally effective against both the pass and the run. Nick Bosa is making a case to be Defensive Player of the Year with 17.5 sacks and will wreak havoc with Derek Car this week. The Niners are deep at all levels of their defense and will show no mercy to a struggling Raider offense this week.

The Raider offense started to get on track with McDaniel’s scheme when Josh Jacobs became the focal point in week 11. This led to 3 wins in a row but has come crashing down as the offense has only averaged a total of 270 offensive yards per game, and last week, Jacobs managed just 44 yards on the ground. Carr had all of his weapons available last week – Darrin Waller, Hunter Renfro, and All-Pro Davante Adams, but managed just 174 yards through the air, and to make matters worse, he also threw three picks. The task for Carr and company will not be any easier this week, and the results probably won’t be any better. The Raiders will have little success rushing the ball, and Carr will have to shoulder the burden. SF can rush four and create pressure. Carr has not proven all year he can put the team on his shoulders, including nine interceptions over the last five games. I expect another dominating performance by the Niner defense and the Raider attack to be overwhelmed.

SF Is A Covering Machine

The 49ers are riding an eight game straight up winning streak, covering the spread in 7 of those games. They have been favored in their last six games and covered each one. They have been on the road in 3 of those games and covered each one, and been more than a field goal favorite in 6 of those games and covered 5. San Fran’s team boasts elite offensive and defensive lines that travel well and will show up and dominate the trenches in Vegas. SF can prevent back door covers because they can run the ball and drain the clock, while their defense can stay aggressive because of their deep defensive line that puts relentless pressure on QBs throughout the game.

Lay The Points With The 49ers

San Francisco is prepping for a deep playoff run while the Raiders are just playing out the schedule. Jump on the Niners’ wagon and count on them to win and cover the 6-point spread.