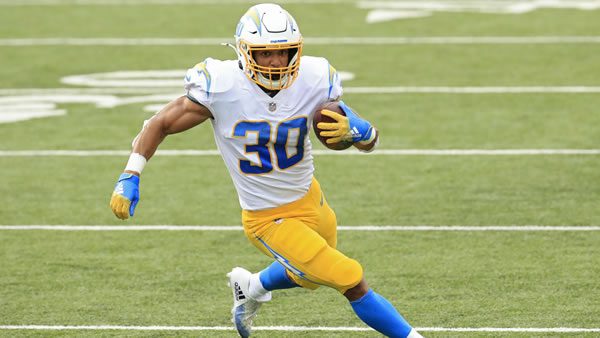 The Seattle Seahawks come south to face the Los Angeles Chargers in a Week 7 showdown at SoFi Stadium in Inglewood. The Chargers are back at home for the second straight week on Sunday, coming off the short week after a 19-16 OT win over Denver. Short week and long overtime game aside, they got the win to move to 4-2 and seem to have a decent spot at home against a 3-3 Seattle team coming off a nice 19-9 win over the Cardinals on Sunday. Flipping the script as an all-offense/no-defense squad, the Seahawks showed a different side and look for a nice boost on the road this week against their former division rivals. Who can get us the cover in week 7? Let’s break it down!

Will the Chargers’ Offense Fully Come to Life?

Coming off one TD and three field goals on MNF in nearly five quarters of football showed a Chargers’ offense still off-key. We have seen protracted struggles from the run game, even if Austin Ekeler has been finding the end zone. Coming into the season with two top receivers, we’ve seen muted performances from Mike Williams and an oft-injured Keenan Allen. Some hits on the offensive line have made Justin Herbert less protected. All in all, we see fewer defined roles on this side of the ball and a lot of games where you’re waiting for something that never happens.

But with 64 combined points in their last two games heading into their game against Denver on MNF, maybe the performance of the Chargers’ offense is more related to the condition of the opposing defense. For all of Denver’s issues, their defense has remained surprisingly resolute, and there aren’t going to be a ton of teams in full-flight against that group. I think it’s easy to see things like how hard it is for the Bolts to run the ball and how their top guys don’t have big numbers yet. But all in all, there might not be much cause for alarm other than not shining against the better defenses they face. And Seattle has generally not been that in 2022. They flummoxed a Cardinals team that looks decent on paper on Sunday, but that’s still an offense mired in complete frustration. This might be a little different.

The X-Factor Appeal of the Seahawks

One of the harder teams to define, we’ve seen weird about-faces from this Pete Carroll team over the years, and that seems to be holding true this season. Even with Wilson, we’d see the Seahawks switch on a dime from all defense and no offense to a shootout team looking to bombard opponents with offense. Already this season, we’ve been forced to undergo a few different perception overhauls on Seattle. First, they were just out there taking up space before coming out on the good side of a few shootouts, leading up to their “D” holding the Cardinals to only a field goal on Sunday. That was highly unexpected after allowing 84 points in consecutive weeks to the Lions and Saints. Some weeks, we’ve seen Geno Smith slinging it all over the field. Other games, he’s quieter. They are just a team where it’s tough to get read on them.

The Seattle defense has been bad, and that would conceivably set up well for Justin Herbert this week, in addition to Austin Ekeler, who could have some big yardage totals to complement his touchdown stats. But then again, just as soon as you think you have the book written on Seattle, they flip it on you. Running back Kenneth Walker had a nice first game as a starter last week and looks to give Seattle a boost on offense, with Smith slinging it to DK Metcalf and Tyler Lockett. They have a lot of weapons to wield on a Chargers’ defense that has seen injuries and inconsistent play undermine their form. In recent weeks, we’ve seen this Chargers’ defense give up production to teams like Cleveland, Houston, and Jacksonville. The Seattle team we’ve seen at points this season should be able to do some damage in this spot.

More Picks: Get Loot’s Pitt/Mia Week 7 prediction against the spread >>>

Holding it down at home against an Arizona offense on the rocks and thinking that’s going to transfer in this cross-conference matchup against the Chargers could be too much of a leap of faith. Granted, the Seahawks play here against the Rams once a year, so that’s not likely to throw them off, especially in a stadium where the Chargers’ “home-field advantage” is probably the weakest in the league. But unlike last week and in some other spots this season, this Seattle defense will be going against a defense with some major talent across all areas, even without Joey Bosa. They can get to Geno Smith, make plays aerially, and be generally very disruptive to a Seattle offense that depends on flow on rhythm. Ekeler has been used very conservatively. Isn’t this a spot where you can picture him being turned loose? Will someone like Khalil Mack force Smith into some mistakes against an opportunistic secondary?

Taking a stance against Seattle isn’t as easy as some thought it would be before the season started. They are the perfect example of a flawed but ultra-dangerous team that, on a given week, can render all sensible analysis moot. You don’t really know what you’re getting. Combine that with a Chargers team that, despite being 4-2 and having performed well against the spread, seems a bit muted overall, and it’s easy to see why taking nearly a TD in points could have some appeal. I just can’t help but think that Seattle won’t be able to stop all the things that the Chargers do well. And whether it’s a huge game from Ekeler or an aerial bonanza from Herbert, something is going to get Seattle at the end of the day. I’ll take the Chargers.

Loot’s Prediction to Cover the Point Spread: I’m betting on the Los Angeles Chargers minus 6.5 points. You can bet the Chargers at +12.5 by inserting them into a massive 19 point NFL teaser at Wagerweb!