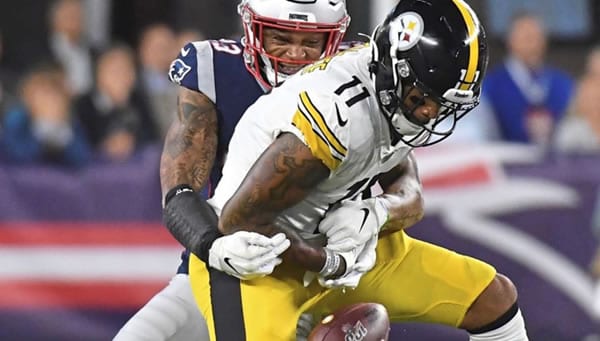 The Baltimore Ravens head north to Foxboro to take on the New England Patriots for a Sunday Night Football matchup on NBC. The Patriots hold a 10-4 edge in the series, but after going 7-1 through 2012 against the Ravens, things have started to even out with a 3-3 split over their last six matchups. This includes a 37-20 win for Baltimore in their most recent matchup a season ago.

In that win against the Patriots, Ravens quarterback Lamar Jackson threw for one touchdown while rushing for an additional two. Jackson’s success on the ground has directly correlated to Baltimore’s success in the standings, as the team is 11-1 when he rushes for a touchdown and a perfect 10-0 in regular-season games when rushing for 90 or more yards. His passing stats have had a reverse effect, as the team was just 2-6 when Jackson completed 54.2% of his passes or less. The Ravens quarterback has only lost seven games as a starter, and in all seven losses, he attempted 28 or more passes and has gone 5-7 overall when having to throw that much in a game.

Jackson leads a Baltimore ground attack that ranks first in the NFL in yards per game. The quarterback tops the team with 469 yards on the ground, and with Mark Ingram hampered by injury of late, the backfield duties have been split between Gus Edwards and JK Dobbins. Both have had double-digit carries in the past two games, with Edwards riding a three-game scoring streak and Dobbins more of a threat in the receiving game and looking to get in the endzone himself after not having scored since week one of the season. Ingram returned to practice this week after missing time since Week 6 due to an ankle injury suffered against the Eagles. If he is able to return this week, it is anyone’s guess how the usage will be dispersed amongst the Ravens weekly game of running back roulette.

Wide receiver Marquise ‘Hollywood’ Brown is the leader of the pack for the Ravens in receptions and yards but hasn’t been as happy of late about his usage in the offense and made it known publicly on Twitter after their loss to the Steelers. Marquise is cousins with behaviorally troubled Antonio Brown and is listed as a possible witness in one of the lawsuits currently pending against the former Patriot/Steeler/Raider receiver. Similar to Lamar Jackson, Marquise’s usage has seemed to have a positive effect on his teams’ chances of being victorious, as Baltimore is 6-0 this season when Brown has more than two receptions but 0-2 when he has two or less.

Topping out his team in touchdowns is tight end Mark Andrews, who has five on the season but has seen a slowdown statistically of late with just eight catches for 75 yards and zero scores over the past three weeks. Willie Snead and Miles Boykin are next up on Lamar Jackson’s target list, with Snead putting up nine receptions over the past two weeks after having just 11 in the first six games, while the second year wideout Boykin is still hoping to make the sort of impact his similarly sized former teammate at Notre Dame Chase Claypool is having with the Pittsburgh Steeler offense. There are only so many targets to go around for a passing attack that ranks second to the last in the NFL, so it remains to be seen on a weekly basis who will top the team. The group, in general, looks to have a better chance of success through the air on Sunday, with the Patriots Stephon Gilmore still unable to practice due to a knee injury and his status looking doubtful at best.

The Patriots come into this week’s game with at least a bit of upward momentum after ending their four-game losing streak with a last-second victory against the Jets last Monday night. There is only so much excitement though you can get out of needing the entire 60 minutes to beat a winless team, but in a wasted season, like they are experiencing now, the Patriots will take any positivity that they can get.

The New England passing game ranks just 28th in the league in yards per game, and this week faces arguably its toughest test of the year going up against a Baltimore defense that is in the top ten in every major defensive category, including first in scoring. They are also back-ended by one of the best cornerback duos in the league in Marlon Humphrey and Marcus Peters, which definitely provides an additional strategic challenge for a Patriots offense that has only three passing touchdowns on the season.

Despite not throwing for a score for the fifth straight game, Cam Newton at least showed some improvement in the passing game and finished with his highest QB rating of the season since week 1. His completion percentage of 77.1 was his best mark in a game since November of 2018, and even though he didn’t get into the endzone, he at least made it two straight games without an interception. Another good look for their depleted passing game was the connection he has been able to establish with second-year receiver Jakobi Meyers, which, to give Newton credit, is something his predecessor was never able to accomplish. This is a welcome sign as they enter the second half of their schedule with Julian Edelman season probably over, N’Keal Harry still fresh off of a concussion, and the Patriots tight end group as a whole decimated by injuries.

Who will be part of the Patriots backfield remains to be seen, with breakout RB Damien Harris suffering a chest injury against the Jets and currently listed as questionable to play on Sunday. Sony Michel could be activated from the injured list, but he hasn’t played since week three and will undoubtedly have some rust to go along with his general underachieving. Rex Burkhead will get an increased workload if Harris and/or Michel is unable, but whoever is handed the ball will certainly have their work cut out for them going up against a Ravens run defense that ranks 8th in the NFL in yards allowed per game. There are some injuries upfront to both teams that will provide an interesting variable, with offensive linemen Joe Thuney and Shaq Mason questionable for the Patriots while the Ravens Matthew Judon and Calais Campbell are both out indefinitely.

Lamar Jackson has only lost seven games since becoming a starter in the NFL in 2018, and of those three were against Mahomes and the Chiefs, two were in the playoffs, and one was a couple of weeks ago against the undefeated Steelers. Baltimore does not have a habit of losing to bad teams, let alone ones that just let Joe Flacco throw three touchdowns against them, and I fully expect that sort of success to continue on Sunday night against the Patriots in Foxboro with a win and cover for the Ravens.

Mike’s Pick to Cover the Point Spread: Baltimore -7. Bet your Ravens vs. Patriots pick FREE by grabbing a 50% real cash bonus up to $250 at one of the web’s best football betting sites: Bovada Sportsbook! A must have if you’re into live betting! Their in-game betting platform is head and shoulders above the rest! Click here to start enjoying a better experience today!