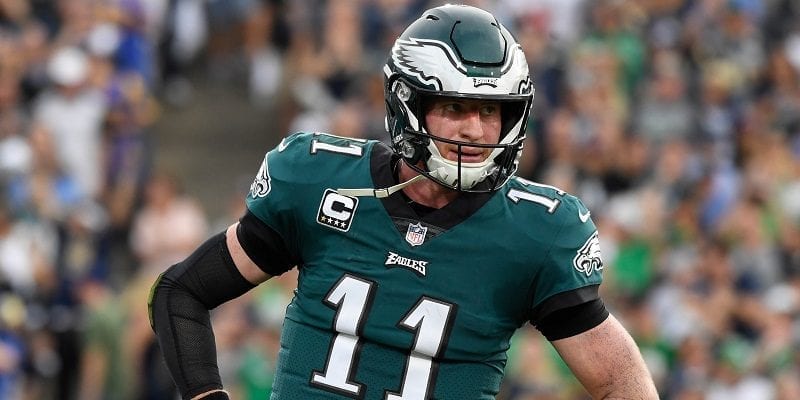 Monday Night Football travels to the city of brotherly love for an NFC East contest between the Washington Redskins and the hometown Eagles. Assuming the Cowboys lose on Thursday night in New Orleans this Monday night matchup will be for first place in the division as the season prepares to start down the home stretch. The Sportsbooks have made the Eagles 6½ point favorites, and although they have only covered the spread 3 times for the season, Philly is the play for MNF. Here are 3 reasons.

Doug Pederson has his Team Right Where He Wants Them

The narrative during the 2017 Eagles Super Bowl run was that they were the underdogs. It was them against the world and they had to overcome one hurdle after another. Of course, the Eagles rose to the challenge, overcame every obstacle that landed in their way including being home underdogs in both NFC playoff games and beating the GOAT and his infamous Coach in the big game with a backup quarterback. 2018 has been a different story. The Eagles were now the hunted and that role has not worked out so well. Despite their 5-6 record and only 3 covers (the fewest in the league) for the year, Philly has been favored in 10 of their 11 games. Although Pederson’s squad is again the favorite on Monday night, they have been written off to have any realistic chance to win their division, let alone win playoff games or make a playoff run. The Eagles backs are literally against the wall. The Eagles will play the Redskins twice and the Cowboys once over the last 5 games. All three are must wins if the Eagles don’t want to spend January watching one of those teams represent the NFC East.

Intertops 50% BTC Deposit Bonus up to $1000 Expires TODAY!
In 2017 the Eagles team rose to the challenges of being the underdog. They were 6-2 in games they were underdogs including the 3 playoff games. Philly is a proud team that had expectations of being a perennial playoff team with the capability to win Super Bowls in any year, but this year has not gone that way. Injuries have played their part, but the players on the field have also not played up to their potential. But now the Eagles find themselves with a chance. The Redskins were well on their way to a 10 win season and an NFC East title until multiple injuries on the offensive line preceded a season ending injury to quarterback Alex Smith. With other miscellaneous injuries sprinkled in, Washington has lost their last 2 games and has come back to pack. Dallas has been on a winning streak and sits at 6-5 on the eve of their game with the Saints while the Giants are again league doormats. Philly now has a chance. The team slithered by the Giants last week and I look for them to pull together and take care of business against Washington, winning by at least a touchdown.

Washington’s Weaknesses are Perfect for the Eagles

Philadelphia has certainly had their own share of injuries which has decimated their secondary and allowed their recent opponents to pass the ball at will. By contrast, the Redskins injuries have been focused in 3 positions – offensive line, quarterback and wide receiver. A host of back-up lineman, Colt McCoy and a receiving corps that doesn’t have Paul Richardson and Jamison Crowder is just what the doctor ordered for Philadelphia. The Eagles have given up over 400 passing yards in each of their last 3 games. One of those games was against the Saints which is understandable, but the other 2 were against the Cowboys and Giants – not understandable. Colt McCoy managed only 258 passing yards on Thanksgiving against the Cowboys while taking 3 sacks and throwing 3 interceptions.

Philly is 12th in the league in rushing yards allowed this year after finishing first in the league last year. Adrian Peterson has looked like the 2012 version of himself, but managed only 35 yards last week. Philly’s defensive line was the key to their defense last year and this week is their chance to get right in 2018. Philly should be able to shut down the run game, and get enough pressure on McCoy to make him get rid of the ball off schedule and probably throw some to the team wearing Green. Philly’s defense matches up very well with the Redskin offenses and should be able to play like the 2017 Philly defense.

The Redskins are Ready to Roll Over

After week 8, Washington was 5-2 and starting to have thoughts about a Division Championship and a playoff run. Fast forward through November and the Skins are leaking oil. They have only managed one win since the 5-2 start and their offensive linemen were mostly backups at the beginning of the year and now have lost their starting quarterback. Hope of winning the division is fading fast. The Redskins were over-achieving in the first half of the year and the offensive line was the primary reason. Along with the D-Line Washington was able to control the trenches, and was finding ways to win games. The team knows they can no longer do this, and the loss last week in Dallas proved it. Washington will roll over during the last month of the season and it could start this week in Philly.

Lay the Points with Eagles
I look for Philly to make a December run to reach the playoffs starting this week against the Skins. Play the Eagles minus 6½.