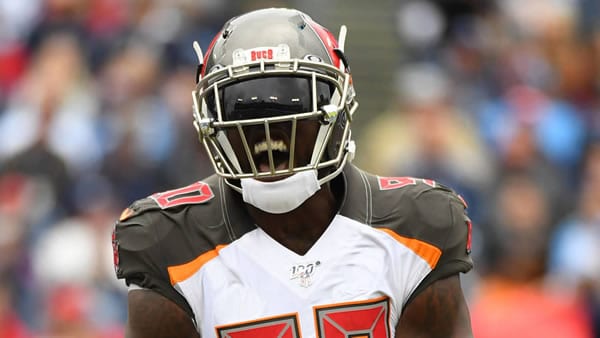 At the dawn of each new era, history will place guards to defend the past, and just as the Patrick Mahomes era is ready to be solidified, here comes Tom Brady to defend his G.O.A.T status. That QB head-to-head is going to be the story ahead of this weekend, but there are plenty of other interesting notes as we head to Sunday. Kansas City is looking to be just the eighth team to successfully defend an NFL title and the first since 2003-04 when - guess who? - Tom Brady led New England to consecutive titles. This will be Brady’s tenth Super Bowl appearance, and fourth in the last five seasons, so the experience advantage is closer than it appears. Andy Reid sits fourth on the all-time playoff win list and will break his current tie with Joe Gibbs with a win, and Mahomes could be the first to win two titles before the age of 25. Tampa is the first team to play a Super Bowl at home, and the Bucs are the first team in NFL history to score 30+ points in three straight road playoff games. Guys, there is a lot going on here, and betting records will be broken with a projected 7 billion dollars in play for this game alone.

Kansas City is just 2-8 against the spread in their last ten, but Super Bowl favorites of 3.5 points or fewer are 11-6 ATS overall. Tom Brady is 6-3 straight up in his Super Bowl appearances, but just 4-5 against the spread, and the Bucs were 5-3 ATS at home this season. KC has been solid against quality opponents with an 11-5 ATS record in the last sixteen when facing a team above the .500 mark but is just 2-7 ATS in the last nine as the favorite. Tampa is 4-0 against the spread in the previous four as the underdog and 5-2 ATS in the last seven when facing an opponent with a winning record. The OVER has been a dependable bet in KC games under Mahomes, but the OVER is 23-10 in Tampa Bay’s last 33 games overall and 9-4 when the Bucs are the dog. Heading into the midweek betting period, roughly 60% of public bets are on KC’s side, and 72% of the action is coming in on the OVER.

Tampa has run off a franchise-record of seven consecutive wins, with their last loss coming in Week 12 against Kansas City. The 27-24 final somewhat hides that KC jumped out a 17-0 lead and held a 17-point margin into the fourth quarter before the Bucs notched two scores in the final period. Tyreek Hill had three touchdown receptions (75,44,20), and Mahomes finished with 462 yards passing. Brady had 345 yards passing and three scores but was also picked off twice. Rob Gronkowski led TB receivers with 106 yards, and Mike Evans had two touchdown grabs. Lost in some of the eye-popping stats was that this game greatly slowed down through the middle portion as the teams combined for 18 penalties, with both punting on four occasions. Neither team cracked 90 rushing yards for the game, and Kansas City went 0-for-3 in the red zone. Tampa Bay was able to sack Mahomes twice while Brady was sacked just once. Since that loss, the Bucs have averaged 34.2 points per game en route to their first Super Bowl appearance since 2003.

Plenty of teams have exhibited serious Super Bowl hangovers, but that really hasn’t hit KC too hard unless you want to look at their 8-10 ATS record this season as a sign they are ripe for the picking. Mahomes had some statistical regression during the regular season but still completed 66% of his passes for 38 touchdowns and compiled a 108.3 passer rating. He has completed 75% of his passes this postseason with four passing scores and a 118.5 rating. The Chiefs finished first in passing yards per game and total yards per game, while their 29.6 points per game were good for sixth. Clyde Edwards-Helaire led the 16th best rushing attack and finished with just over 800 yards, but Darrel Williams has taken over in the playoffs, leading the team with 26 carries after logging just 39 totes in the regular season. Williams is averaging five yards per carry in the postseason and has chipped in five receptions while scoring once. Travis Kelce and Tyreek Hill combined for 2,692 receiving yards and 26 touchdowns in the regular season, and the duo has stayed hot in the playoffs with Kelce at 227 yards and three touchdowns and Hill at a team-high 282 yards. Mecole Hardman finished third on the team with 560 receiving yards, but we should keep an eye out for Mahomes to possibly find an unlikely hero on Sunday as five different Chiefs have exactly one touchdown reception this season. The defense has been middle-of-the-pack in yardage categories but finished tenth in scoring, allowing 22.6 points per game. Tyrann Mathieu leads with seven interceptions, including one in the playoffs, and Frank Clark posted a team-high six sacks with eleven different defenders notching at least one sack during the regular season.

Who knows what the future holds for Tampa, but it is impossible to say that bringing Brady in to lead this mercenary crew has been anything other than a complete success. It wasn’t always smooth sailing, but the Bucs had the 2nd best passing game in the league, with Brady throwing for 4,633 yards and 40 touchdowns in the regular season. He has slipped to 55% completions during the playoffs but made several big-time throws throughout, especially against Green Bay as Tampa converted on nine of their first ten third-down opportunities in the NFC Championship game. The running game was just 28th, but that didn’t drag down scoring, and TB finished with 30.8 points per game, good for third in the league. Ronald Jones II led with 978 yards (5.1 ypc) during the regular season, with Leonard Fournette pulling back-up duty, but the roles have reversed over the last three weeks as “Playoff Lenny” leads the team with 211 rushing yards and two touchdowns. Fournette also has 14 postseason receptions after recording 36 during the regular season. Mike Evans was the only Bucs receiver to hit 1,000 yards this season, but he, Chris Godwin, and Rob Gronkowski combined for 27 touchdowns to make for one of the best 1-2-3 punches in terms of scoring. Six different Bucs receivers have caught a touchdown pass in the playoffs, and Cam Brate (11-149-1) has emerged as the more effective TE with Gronk limited to a 2-43 line in the postseason. Tampa was the best run defense in the league, allowing just 80 yards per game, but the pass game was softer, ranking 21st in yards allowed. That said, the pass D is complete with a smorgasbord of pass rushers. Jason Pierre-Paul led the way with 9.5 sacks, but Shaq Barrett and Devin White were right behind with nine apiece. Carlton Davis led the NFL in pass defenses during the regular season, and the Bucs have accounted for 20 pass breakups in their three playoff wins.

The world will belong to Mahomes soon enough, but this weekend will still belong to Tom Brady, and it has more to do with Kansas City on defense than anything else. Brady has 36 touchdown passes and zero interceptions in the red zone this season. Redzone D is a trouble spot for KC, specifically, they are dead-last in red zone touchdown percentage allowed, surrendering a TD on 74% of opponent trips inside the twenty-yard line. The Chiefs are likely to score but so are the Bucs, especially if they can get down close. The next pro-Tampa predictor is non-blitz pressures. During the NFC Championship Game, the Bucs notched five sacks and ten QB pressures while rushing just four. Mahomes is shifty, but the ability to pressure, hurry and hit while still leaving seven back in coverage is the kryptonite for any QB, mobile or not. Tampa is averaging nearly 35 a game since last losing to KC, and they were the better scoring offense overall, so I think they can hold up in a back-and-forth contest just fine. I think Tampa is better suited to win a grind-it-out game as their defense is better back-to-front, and they get the benefit of not having to travel even if all the 22,000 in attendance won’t be Bucs fans. I’m ready to go in on the Money Line on the Bucs - currently in the +145 to +170 range - but I also see plenty of realistic scenarios that have KC pulling out a 30-28 kind of win as well. I think a classic is brewing, and the big names will shine, although a name like Hardman, Brate, or Scotty Miller could have the biggest moment of the night. Tampa Bay 31 - Kansas City 29

Ted Walker’s Pick to Cover the Spread: Tampa Bay plus the points. Bet your Super Bowl LV pick for FREE by taking advantage of a 100% real cash bonus on your first deposit of $100 to $300 at MyBookie Sportsbook! Must use promo code PREDICT100 when registering!