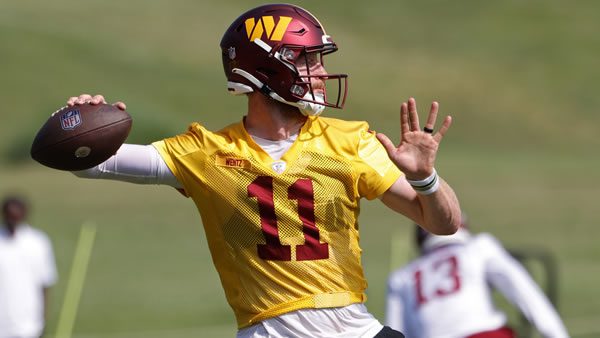 The Tennessee Titans take on the Washington Commanders at FedEx Field on Sunday in week five action. After a disconcerting 0-2 start, last season’s top AFC seed Tennessee has righted the ship with two straight wins, including a 24-17 win over the Colts on the road on Sunday. They now look for their third win in a row, again on the road against the Commanders. After a week one win, the Commanders have struggled mightily in dropping their last three. On Sunday, they lost to the Cowboys, 25-10. Who can get it done in Landover on Sunday?

Are the Titans Back On Point?

Being that the Titans are a team that oftentimes wins ugly, perhaps nit-picking their games misses the point. Through four games, they were beaten by the lowly Giants and slayed by Buffalo before beating the Raiders and Colts in one-score games. Something seems discernibly off. A defense that was never that stout and relied on a ton of major playmaking ability hasn’t been getting it this year. A balanced offense with a lot of weapons has been diminished. Ryan Tannehill has lost some shine over the past few seasons. But then again, maybe some of these things were to be forecasted, and a slow start to the season can be misleading.

First of all, they’re 2-2, so not everything is in shambles. They can be 3-2 and back in the divisional driver’s seat with a win over the slipping Commanders on Sunday, so let’s not get carried away. With Derrick Henry coming off a bad injury, maybe it should have been expected that he wouldn’t come out the gate fast, but the last few weeks shows him to be back in good form. Their revamped receiver crew consists mostly of a rookie in Treylon Burks and another player coming off an injury in Robert Woods, who is also on a new team. Throw in a bunch of injuries into the mix which have affected the offensive line and the defensive secondary and middle, and it becomes clearer that maybe we should keep our perception of Tennessee a bit fluid.

Finding a Case for Washington

It’s not easy at this point, but in this crazy league, it almost sets up for a surprise from Washington this week. We saw Carson Wentz and the Commanders looking pretty good in beating the Jags in week one and even in parts of a second-half comeback attempt against the Lions the next week. The last few weeks have featured a total of 18 points scoring, a defense that has been hung out to dry, and sequences of downright slapstick, especially on offense. Granted, no one thought Wentz and the Commanders would soar this season. And their injuries offer a form of an excuse. But even within that framework, it’s starting to get ugly.

The return of RB Brian Robinson from a gunshot wound offers promise, but he still has to work behind a bad line against opposing defenses showing Wentz’s arm less and less respect. Terry McLaurin has started disappearing in this offense with more and more regularity. Jahan Dotson is a nice rookie receiver who has done some early damage, but there are a lot of mouths to feed in this offense that is riddled with poor offensive line and quarterback play. Curtis Samuel is also there looking to do damage, along with a decent tight end in Logan Thomas, and more often than not, this offense is spinning its wheels. But we’ve still seen this group do good things this season, meaning that is a possibility at home against a Tennessee defense that is prone to giving up production.

While an unfortunate slew of injuries have taken a lot of steam out of this Commanders’ defense, one could have anticipated better results this season so far. This is a spot where it’s not difficult imagining the Titans getting it done with Derrick Henry or some of their aerial weapons. In the last three weeks, we’ve seen Jared Goff throw four touchdowns against this bunch. We’ve seen Jalen Hurts have a big day through the air. And last week, Dallas backup Cooper Rush had his best game of the season playing this defense. Maybe we see Tannehill rely on Henry, but there’s a chance here for the Titans’ aerial attack to take better hold after showing some good signs.

The Power of Reliability

It’s understandable why one would think the arrival of Robinson, being at home, and playing a vulnerable defense sets up well for a little Washington spike this week. But with Tennessee, you have the reliable contribution of Henry and a quarterback in Tannehill who usually doesn’t upend the entire effort with errors. He’s not going to throw a ton of picks, cough up the rock, or sail wide open third-and-eight passes ten yards out of bounds. The Titans are a streaky type of team, and when things start clicking, they can be dangerous. They might be in that mode now, and that’s bad news for a Washington team struggling to get things right heading into week five.

The possibility of a Washington surge in this spot, combined with the Titans having an off-week, could be asking for a little too much. Not that the Titans are infallible or that the Commanders can’t reverse form at home. But I sense it’s going to take more than a wayward Washington squad to send the Titans back onto the rocks. I think this sets up for a more-complete Tennessee offensive performance than we’ve seen in recent weeks, along with a spot for the Tennessee defense to reestablish their big-play ability. I’ll take the Titans.

Loot’s Prediction to Cover the Point Spread: I’m betting on the Tennessee Titans minus 2.5 points. Move the spread up to 19 points with a massive NFL teaser offered at Wagerweb Sportsbook!